Princess of Sweden, duchess of Sachsen-Lauenberg

Princess Sofia was a Swedish princess and the Duchess of Saxe-Lauenberg.

Princess Sofia was born in 1547 in Stockholm as the eighth child of Gustav Vasa and his seventh child together with his wife Margareta Leijonhufvud. Her mother Margareta died before Sofia was four years old, and the princess and her siblings were brought up by their step-mother Queen Katarina Stenbock, their maternal aunts Märta and Brita Leijonhufvud, and Kristina Nilsdotter (Gyllenstierna). Sofia and her siblings mainly spent their childhood and youth at Stockholm Castle and Gripsholm Castle.

According to Gustav Vasa’s heritage association, his daughters had no chance of inheriting the throne or the extensive royal domains. Their economic support had instead to come through marriage, and Gustav Vasa’s intention was that his daughters should act as a kind of ambassador for Sweden in their new home countries. Princess Sofia and her four sisters were to be compensated economically with a dowry of 100,000 daler. The five sisters were however to be compelled to fight for many years to receive their money.

Princess Sofia was extremely reluctant to become engaged to Magnus of Saxe-Lauenburg.

The wedding was planned for the summer of 1567 but was postponed several times because of political tensions and disputes concerning her future economic support. The wedding to Magnus finally took place in the summer of 1568 in Storkyrkan in Stockholm. It was held at the same time as the official wedding ceremony between Princess Sofia’s brother Erik XIV and soldier’s daughter Karin Månsdotter, whose previous unofficial marriage now needed to win legitimacy.

It was clear right from the beginning that Princess Sofia was not going to move to her husband’s duchy and that, despite her marriage vows in the marriage contract, she was not going to receive any economic compensation from her husband. Of all Gustav Vasa’s daughters, Princess Sofia was instead the one to be supported by her fiefdom in Sweden, thus she was kept by the Swedish royal house. Upon her marriage, she and her husband had been given Ekolsund, Venngarn and a couple of districts in the province of Uppland as loans for their upkeep. Princess Sofia’s fief thus consisted of over 600 farms, although their exact total and geographic situation were to vary several times during her lifetime. Not least, her husband Magnus’ behaviour was to have a negative effect of the extent of her fiefdom.

Princess Sofia and Magnus had at least six children together. All except their son Gustav, born probably sometime at the beginning of the 1570s, died as babies. The marriage was soon to prove difficult. The couple had great economic problems and soon after their marriage, Magnus pawned many of Princess Sofia’s valuables. The money was used for a failed attempt to conquer his younger brother’s duchy. The couple continued instead to reside in Sweden.

Judging from the correspondence between Princess Sofia and her siblings, Magnus was very cruel to his wife. He obstructed and sometimes refused her contact with her family, and around the mid- 1570s, she was in principle isolated at Ekolsund. There was besides much that suggests that Magnus also maltreated his wife physically. Only a few years on in the marriage, Princess Sofia’s siblings tried to get her husband to leave the country, for example by offering him foreign fiefdoms. Apart from his treatment of Princess Sofia, he is supposed among other things to have terrorised the local population and stolen from his sister-in-law Princess Elisabet. The untenable marriage was a national concern that was discussed at council meetings. Princess Sofia appealed many times for more money for her husband. Whether her taking sides for her husband was based on wifely loyalty, fear of her husband’s violence or perhaps was a strategic role, is impossible to decide now. Finally, Princess Sofia’s brother Johan III decided that the fiefdoms that had been given to the couple should only belong to her, and that Magnus should be imprisoned if he did not leave the kingdom. In the spring of 1578, Magnus left Sweden and Princess Sofia became the so-called sole guardian of their son Gustav.

Princess Sofia’s great economic dependence on the regent meant that she took on a gentler and more loyal attitude to the king in the sibling group’s internal conflicts. When her brother Johan III married the non-royal Gunilla Bielke in 1585, she was the only one of the siblings to attend. Irrespective of whether, like the other siblings, she considered the marriage unsuitable, she was probably not in a position economically to protest.

Her son Gustav became a headache for Princess Sofia. In the Vasa siblings’ correspondence, he appears as pampered and unruly. As a part of providing for him, she tried to share her fiefdom with him, and she and her siblings were indignant therefore when Gustav continued to demand more resources. Princess Sofia’s economic situation became so difficult that she had to leave Ekolsund for a time, since the storerooms there were empty, and go to live with her brother Duke Karl. Gustav was shot accidently in the summer of 1597 and he died later during the autumn of his wounds.

After her son’s death, many of Princess Sofia’s troubles continued. She was in conflict with her employees and with her siblings, and she seems not to have trusted anyone in her surroundings. The siblings’ correspondence intimates that her mental health deteriorated during the latter part of her life. Whether or not she suffered from the same mental problems as several of her male relatives, or whether this was a result of a life under great psychological pressure is difficult to establish so long afterwards.

Princess Sofia died in 1611. She is buried in Strängnäs Cathedral. 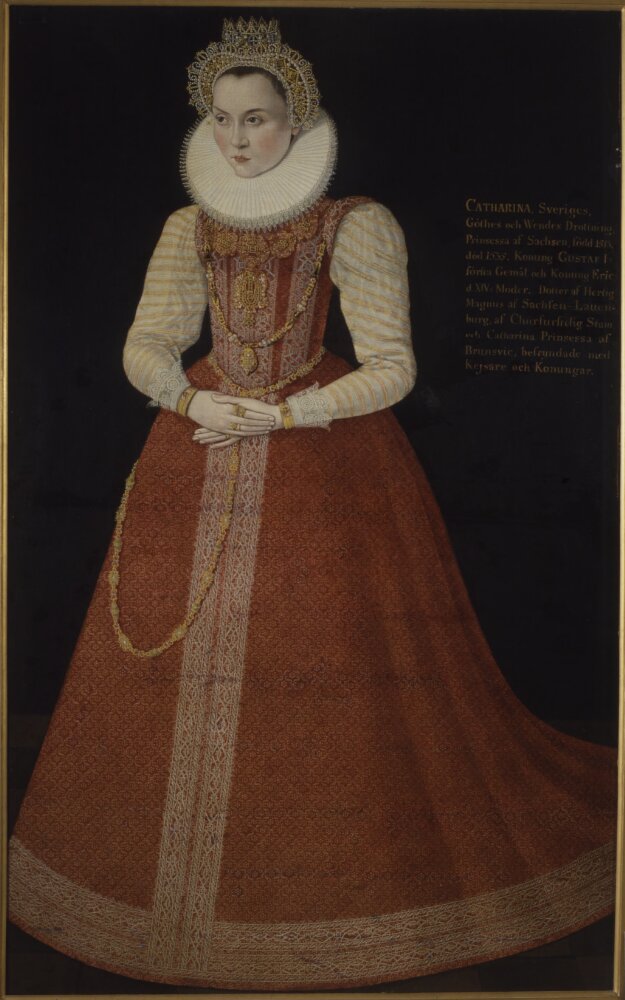