Sonja Edström was Sweden’s top female skier during the period of 1953–1960. She also ranked among the world’s best female skiers at this time.

Sonja Edström was born in Luleå in 1930. She was the youngest of six siblings. After her parents, Erik and Sigrid Edström, had had their first two children the family moved from Nedertorneå to Luleå. Erik Edström changed professions at this time, switching from being a sawmill-worker to becoming a customs officer.

Sonja Edström began to ski cross-country as a child but it was not until her mid-teenage years that her career as a skier took off. As she revealed in later interviews, Sonja Edström would have preferred to ski slalom, but the nearest downhill ski slope was a car journey away and her parents did not have a car. Instead, she took up cross-country skiing at Ormberget close to her home. Elof Larsson, one of the ski instructors, spotted her skills and convinced her to join Luleå SK (ski club) and to begin competing. She was immediately registered for the district championship (DM) competition, at which she finished in one of the top spots. This success fuelled Sonja Edström’s thirst for competing and so she began to train. She achieved sixth place in the 1950 Swedish championship (SM), and at the 1951 SM – at which the relay race was first held – she came in second. She also competed in the Boden games during this period, attaining fourth and second place respectively. Sonja Edström came first in the final selection races ahead of the 1952 Olympics, knocking Märta Norberg, the top skier of the day, into second place. These results led to Sonja Edström becoming part of the Swedish Olympic ski team.

The Winter Olympics had first been held in 1924. However, the ladies’ cross-country skiing event was not introduced until 1952. That year the Olympic ladies’ skiing event was held in Oslo, for a single distance of 10 kilometres. The Swedish team comprised four members, of which Sonja Edström was the youngest and least accustomed to such competition. Sweden placed its hopes in Märta Norberg who had already won several cross-country skiing SM gold medals. In the end all the medals went to Finnish competitors. Märta Norberg came in three seconds behind the bronze-medal winner, and fourteen seconds behind the silver-medal winner. Sonja Edström was last to finish of all the Swedes, coming in eleventh place.

During 1953 Sonja Edström spent some time living in Vålådalen, where she trained with the legendary Gösta Olander. He had instigated the founding of Luleå SK many decades earlier, in 1915. That club’s jubilee publication includes Sonja Edström’s account of how much Olander taught her, “particularly the handling of ski poles”. She was full of optimism for the future. That same year Sonja Edström was part of a group of female skiers who visited Italy and promoted the sport.

The skiing World championship began – initially under a different name – in 1925 and became an official event in 1937 albeit the ladies’ event only started in 1954. The first World championship with a ladies’ event was held in Sweden at Falun. The programme had expanded from the 1952 Olympic debut to include two ladies’ events, the 10 kilometre race and the 3 x 5 kilometre relay race. Seven Swedish women set off in the 10 kilometre race, but the win went to Ljubov Kozyreva from the Soviet Union, followed by two Finns in second and third place. Sonja Edström was the top Swede and achieved seventh place, half a minute behind the bronze medallist. The Swedes had better luck in the relay event where the trio of Anna-Lisa Eriksson, Märta Norberg, and Sonja Edström put in a fine performance. Sonja Edström finished strongly and the team won the bronze medal, albeit they hardly threatened the top two teams, the Soviet Union finishing first and the Finns in second place.

At the 1956 Olympics, held in Cortina, Italy, the ladies’ Olympics events expanded to include the 3 x 5 kilometre relay race (already a World championship event). This was the first year that the Soviet Union submitted an Olympic team. Of the 4-woman Swedish team Sonja Edström was the only one who had been at Oslo. Although she had been on fine form at the Oxberg selection trials, she had, however, managed to freeze one of her little toes during the cold winter months, forcing her to stop training for several weeks. She started strong in the Olympic race but fell into third place during the second half. She ended up coming in twelve seconds behind the Russian winner, and seven seconds behind the Russian silver-medallist. Nevertheless, Sonja Edström’s bronze medal was the first for Swedish ladies’ skiing at the Olympics. The remaining Swedish team-members came in seventh, thirteenth, and fourteenth. Ahead of the impending relay race Sonja Edström’s form increasingly improved, raising hopes of another medal. Irma Johansson who was in the first section fell heavily behind and just made it into fourth place. Anna-Lisa Eriksson skied the second section, almost keeping up with the Norwegian skier, but still far behind Finland and the Soviet Union. Sonja Edström skied the last section in a time of two minutes and ten seconds, coming in behind the winner. This was a supreme effort, “going like a fury” as the Olympiaboken put it, and although she had the overall best section-time she was not able to surpass the two leading teams. She came in 47 seconds behind the Finnish competitor and 20 seconds after the Soviet one. Sweden definitively won the bronze medal, beating Norway by over a minute. The press reaction was jubilant and Sonja Edström became “a nationwide star”, as was proudly proclaimed in the club history.

Sonja Edström’s performances in ensuing international competitions confirmed that she belonged to the top-ranked skiers of the day. She won the Svenska Skidspelen (Swedish skiing games) 10 kilometre race in Falun, at Holmenkollen, and at Lahtis, in supreme style. The international skiing elite – except for the Russians – were present at all of these competitions. Sonja Edström’s win at Lahtis was the first win by a foreigner there. In total she won 15 of the 18 races she competed in that year. At the international races held at Garmisch-Partenkirchen the next year Sonja Edström won the individual race of over 10 kilometres and she was part of the winning Swedish relay team.

The 1958 World championship took place in Lahtis, Finland. In terms of the Swedish ladies’ performances the results were largely a repeat of what had been achieved at Falun four years earlier. Five Swedes were on the starting line for the 10 kilometre race and the veteran Märta Norberg achieved the best result, coming in tenth place. Sonja Edström had a poor race, only finishing 22nd which, according to ski historian Vidar Martinell was down to a “major waxing issue”. The Swedish relay race team comprised Märta Norberg, Irma Johansson, and Sonja Edström, all of them old hands at this event. After the first section Sweden was in fourth place but the team progressed in the successive sections. Once again Sonja Edström led Sweden to a bronze medal thanks to her confident performance in the third section, coming in over three minutes after the Soviet team and almost two minutes after the Finnish team.

The 1960 Olympics were held in Sqaw Valley, USA. The tracks were at nearly 2,000 meters’ elevation and many feared that the thin air could impact negatively on some of the competitors. Three of the four Swedish female cross-country skiers had competed in the previous Olympics and in this time Sonja Edström was the eldest. However, at the time of the race, in which there were 24 entrants, she was suffering from “light food-poisoning” and this weakened her. The four top spots were taken by Russian skiers. Sonja Edström came in fifth, about half a minute off a medal-scoring time. Of the remaining Swedish competitors Barbro Martinsson achieved seventh place. In contrast, despite the Soviet team being favourites in the 3 x 5 kilometre relay race four days later, the Swedish team was hugely successful. Soon after the start, as the skiers headed out of the stadium and towards the countryside, the leading Russian took a tumble after crossing her skis. Irma Johansson then went into the lead and, despite their best efforts the Russians never managed to catch up with the Swedes. At the hand-over the Swedes were clearly in the lead and Britt Strandberg maintained this position. Sonja Edström kept her head during the final section and led Sweden to the gold medal, barely threatened by the Soviet team who finished 40 seconds behind her. At last the Olympic gold belonged to Sweden!

Sonja Edström’s huge talent meant that she completely dominated on the home field. She won her first SM in 1953. The next year she had to miss the SM due to illness. In 1955 she won again. Between the 1955 and 1960 period – when the 5 kilometre race was introduced – she won both races in each year. In total she won 12 individual SM gold medals and very often her winning times were way ahead of her nearest competitor. 1960 was her last major competitive year and Luleå SK won the 3 x 5 kilometre relay race as well as the 5- and 10 kilometre team races. At Svenska Skidspelen she was triumphant in 1955, 1956, 1957 and she came in second place in 1959 and 1960. She truly was Sweden’s “ski queen”, a term that was often used about her.

Sonja Edström married ski-instructor Lars Rutström in 1959. In the spring of 1961 she gave birth to the couple’s first child which meant that she could not compete that year. In 1962 she only competed in the SM 10 kilometre race, coming in sixth place. During 1963 she competed in both the Luleå SM and Svenska Skidspelen, at the latter winning pole position as part of the relay team with Britt Strandberg and Toini Gustafsson. In the spring of 1964 she gave birth to her second child, which signalled the end of her competitive years.

Sonja Edström was a keen music-lover and dancer, particularly the samba. She herself has said that her dancing skills were beneficial to her skiing. She exuded happiness and was generally well-liked. Olympiaboken refers to her as a “very joyful” person during 1956. According to Vidar Martinell “she was everyone’s favourite and became the role model for all female cross-country skiers”. 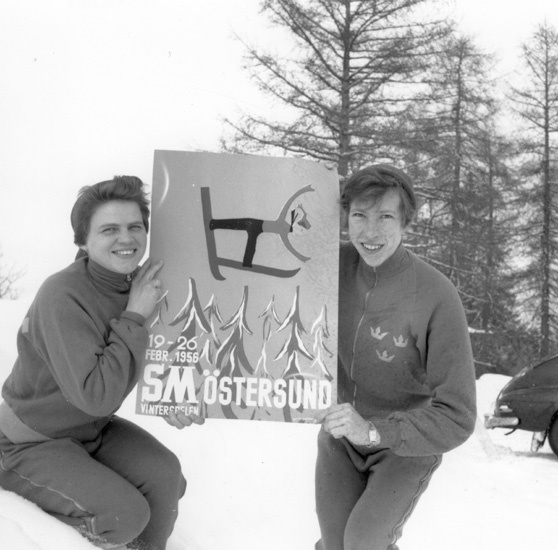