Emma Fürstenhoff worked with handicrafts and she was also a florist who produced artificial flowers. She set up a studio in Paris where she was a fashionable artist during the first half of the nineteenth century.

Emma Fürstenhoff was born as Emilia Lindegren in Stockholm in 1802. Her father, Carl Johan Lindegren, was a poet and a clerk at the Royal Opera. He met Emma Fürstenhoff’s mother, a young noblewoman named Sofia Silfversvärd, and she then became pregnant. This enraged Sofia Silversvärd’s father and her brother, a gentleman-at-arms, challenged his sister’s suitor to a duel. The poet fled for his life but once the heat of the moment had passed an ‘amicable reconciliation’ took place and a marriage was held in 1801.

Emma Fürstenhoff spent her earliest years at her father’s property of Forsta in Södermanland along with her parents. Carl Johan Lindegren was an alcoholic who was unable to manage his finances which meant that he often ended up in the debtor’s prison. He continued to compose poetry, even while imprisoned, and many of his poems were dedicated to both his wife and his young daughter whom he called Milla:

“Farewell Sofie! Be good to our Milla, kindly forget me, but never her! O, do not punish the innocent, the little one because of her father who perhaps made a mistake – she is our dear dream of bygone bliss!”

Emma Fürstenhoff then became a fosterchild who lived at the home of Mademoiselle Forslöf. Forslöf was an ‘åldtfru’, that is a type of housekeeper, for Princess Sofia Albertina. Emma Fürstenhoff then began to attend Madame Jacob’s school, which was one of the best schools at the time. The young girl stood out as a quick-witted and happy individual, who wrote verses, sang songs, and was a lively and dramatic story-teller. She gained the affections of Princess Sofia Albertina, who often asked for her as a playmate and as a companion.

Emma Fürstenhoff married whilst young in a “mutual arangement” with Johan August Fürstenhoff, an accountant appointed to the newly-established Gustafsberg porcelain factory. In 1840 the couple’s son Johan was born and in order to contribute to the family finances Emma Fürstenhoff began to produce knick-knacks for sale. When Kungliga Tekniska Högskolan opened a Sunday school for women who wanted to learn how to make artificial flowers Emma Fürstenhoff was one of the first students to attend. It was not long before she made a name for herself as an artist and florist and she submitted her flowers made of wax to exhibitions in Stockholm. The flowers were considered to be very realistic and were an innovation at that time.

With this success behind her Emma Fürstenhoff travelled so she could display her wares at exhibitions abroad, in London and then in St Petersburg, where she remained for two years. She became an artistic celebrity of contemporary salons and was a popular guest at the homes of diplomats and Russian aristocrats. Following a spell back in Sweden Emma Fürstenhoff then headed to Paris where her artificial flowers were displayed as part of the Jardin des Plantes exhibition. One of her wax flowers won a prize there for being more beautiful than a real flower.

Emma Fürstenhoff then began to fashion flowers out of cloth and her finished articles became so popular and admired that she opened her own studio where a large number of girls were set to work. One of her best friends, Thilda Österberg, ran the studio at which two of her sisters were also employed. Emma Fürstenhoff felt that her personal finances were now sufficient to allow her to send for her son in Sweden. Her husband opposed this move but eventually Johan spent several years in Paris with his mother who by then had permanently separated from her husband. Emma Fürstenhoff made several visits to her homeland but was never persuaded to move back to Sweden.

In 1870 war broke out between France and Germany and Emma Fürstenhoff began to work as a nurse, caring for the war-wounded. She fell ill whilst serving as a nurse and died in March 1871. Her friend Thilda Österberg was able to find a witness to her death who generated the necessary documents required for a funeral. Emma Fürstenhoff’s remains lie at the Père Lachaise in Paris. 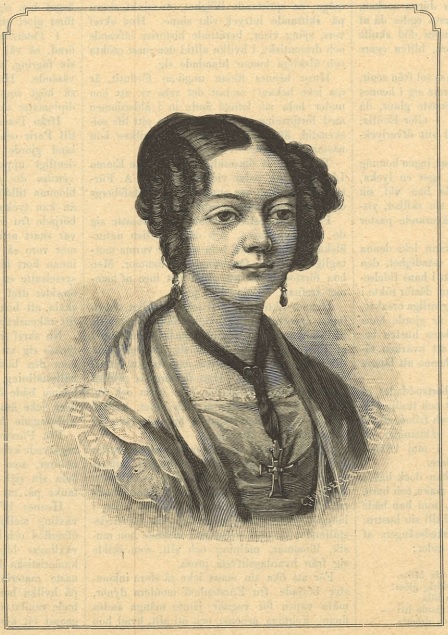