Sophia Isberg, also known as Maid Isberg, was an artist who worked in wood. The type of carved work she produced included pipe bowls, boxes, and urns decorated with human figures.

Helena Sophia Isberg was born in Säby, Småland in 1819. Her father, Johan Isberg, had initially been a parish tailor but later changed his profession to wood turner. He and his wife, Magdalena née Andersdotter, also had a son named Jacob and he too became a wood turner. Under their father’s guidance the children were, from an early age, allowed to help their father with simple woodworking tasks. Sophia Isberg displayed artistic aptitude and began carving wooden toys at the age of eleven. When she was nineteen she had mastered enough skills that she could earn a living as a wood carver. Initially her output comprised of pipe bowls as well as snuff and tobacco containers.

In 1840 the whole family moved to Motala. There they lived in a low-ceilinged wooden house, comprising two rooms, a kitchen and a room. When her parents eventually died the two siblings carried on living together in the same house. Sophia Isberg’s brother’s workshop was in the kitchen whilst hers was in the other room. From the outset the most important aspect of Sophia Isberg’s products was the shape of her products but over time the decorative elements and figures in relief became more prominent.

In 1847 Baron Otto Mörner, known for having offered the Swedish throne to Jean Baptiste Bernadotte, displayed one of Sophia Isberg’s pipe bowls at an exhibition in Stockholm organised by Svenska Slöjdföreningen, now known as Svensk Form. The prize panel felt that “her work displayed unusual artistic talent” and awarded the piece the bronze medal. The creator, hitherto an unknown woman, garnered so much attention that Professor Carl Gustaf Qvarnström of Konstakademien (the Royal Swedish Academy of Fine Arts) attempted to persuade her to move to Stockholm where she could benefit from further training. He offered her financial support for both her accommodation and training but Sophia Isberg could not be persuaded. She wanted to look after herself and she preferred to remain in Motala.

During the next few years Maid Isberg, as she preferred to be known, sent examples of her work to various exhibitions across Europe. She submitted two pieces of carved reliefs to the World’s Fair in Paris in 1855. Her chosen motifs were Napoleon’s triumphal procession and King Gustaf II Adolf’s disembarkation in Germany during the Thirty Years’ War. Seven years later, at the London Exhibition, Sophia Isberg was awarded a medal for her work and at an industrial exhibition in Malmö in 1865 she won first prize, which was a silver medal. Her works were also displayed in Paris in 1867 and in Vienna in 1873.

Sophia Isberg’s knowledge of raw wood material had come from her father and her brother, who were both skilled professionals. She used silver birch for larger containers and maple for smaller ones. She only used elephant ivory on rare occasions. On finding a tree suitable for carving she would have the tree felled sometime before Midsummer, when trees were full of sap. The entire tree, complete with branches and leaves, was then propped up on a trestle after it had been felled and by September or October the wood would be ready for use. The passage of time meant that there was no risk of cracks developing. Sophia Isberg carved with the aid of specially created tools in order to create her intricate figures. She had 53 knives which her brother had made and sometimes required the use of a magnifying glass to create the smallest details. She gained inspiration from newspapers and journals through their lithographic illustrations. Her patron, the iron merchant Eduard Molander, was usually responsible for supplying her with newspapers although sometimes she would receive them from the journalist and suffrage-supporter Isidor Kjellberg.

Sophia Isberg was described as a simple woman who had a sharp mind. Although she was a reserved individual she had friends and she could be happy and rambunctious when in the company of those she trusted. She rarely invited people into her own home, worked in a focused manner and led a quiet life, all the while being a well-known individual in Motala. It is said that King Karl XV visited the town and requested a meeting with the talented wood carver. She rejected a summons to appear before the king and said: “If he has something to say then he can come here”. Although the two of them never did meet the king nevertheless ordered an urn from her. This so-called Kunga-Urnan (King’s Urn) is most unusually signed and was long held at Tullgarn castle. In 1953 it was donated to Motala Museum by the reigning monarch, King Gustav IV.

Sophia Isberg produced everything from simple functional items such as cutlery, needle boxes, and wooden boxes and napkin rings to pieces that were outright masterpieces in the little cottage that was her home. Around 1885 Sophia Isberg’s carvings underwent a change from being produced in low relief to a higher relief. In these works the figures are so deeply carved that they are almost free-standing. Sophia Isberg depicted hunting scenes, mythological figures, and the Bible. Kings were particularly popular figures and Sophia Isberg’s own favourite was Napoleon, who can be found on several pieces. One of her most accomplished pieces is an urn which had belonged to naval Captain Johan August Carlsson, a legendary character within Motala. This piece comprises a total of 223 figures, 15 horses, 2 lions and 1 bird. These motifs are taken from historical events and fairy tales and the urn was probably carved in the early 1860s. Sophia Isberg also produced a self-portrait in the shape of a ring case. The statuette is seven centimetres high and carved out of birch.

After Sophia Isberg’s death Konstakademien had a cast-iron tombstone raised over her grave at Stora kyrkogården in Motala. It bears this inscription:

Thirteen years after Sophia Isberg’s death one of her trestles was sent to the World’s Fair in Brussels. The fiftieth anniversary of her death was celebrated by holding an exhibition at Motala Museum in 1925. The museum has built up a unique collection of her works over the years and a memorial stone has been raised in Motala on the spot where her home used to lie. 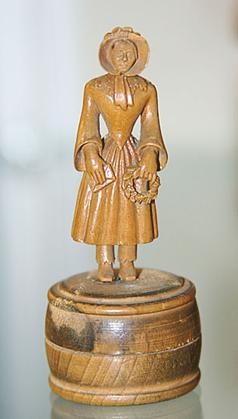