Sophie Sager was born in Byarum parish, Småland in 1825. She was the daughter of Gabriel Sager, a factory-owner. Her mother was Johanna Bergenholtz, who was Gabriel Sager’s second wife. Her father had already had five children in his first marriage, and then went on to have another five children in his second marriage. His death in 1834 left the large family in very dire straits. Sophie Sager was subsequently taken in to live with a relative, who was a dean in Ljungby, and his family.

Following a brief stint at a girls’ finishing school in Jönköping, Sophie Sager initially made ends meet during her younger years by working as a governess and as a companion. However, the opportunity arose for her to train as a professional seamstress and possibly open her own shop. In 1848 she headed off on a steamship from Jönköping to Stockholm. Upon her arrival in the capital city she rented a room from master cobbler Dillström in Gamla Stan (the old town). This accommodation soon revealed itself to be a covert inn and brothel at which she was subject to attempts to force her into the shadowy enterprise.

In a daze of confusion Sophie Sager headed out into the unfamiliar city where she came upon Sergeant Major Gustaf Adolf Möller, who took her under his wing. However, she had leapt from the pan into the fire and he subjected her to attempted rape and abuse. She escaped and sought out Johan Brisman, a doctor, who recorded her injuries.

Sophie Sager made a police complaint, and her case was brought before the court, during which she ran her own prosecution case. The trial gained substantial press coverage, even appearing as a serial in Stockholms Dagblad. Möller was found guilty and fined. This was the first time a case of rape was tried in Swedish courts.

The so-called Sager case was published in 1848 as a 48-page pamphlet, including a foreword and appendix by Sophie Sager herself, which also displayed her portrait, then aged 23. The doctor’s evidence of her abuse highlighted that Sophie Sager had genuinely been in fear of her life and that she still suffered from her injuries. This made a significant impact as legal evidence.

Thus Sophie Sager came face to face with the social and moral decrepitude of the capital city. At the same time she was inspired by Fredrika Bremer and her ideas on emancipation. In consequence, in the early 1850s Sophie Sager, of her own volition, began to publicly demand emancipation for women and that their rights to gain an education and for opportunities to work be recognised. When she gave speeches her audiences tended to comprise men who often laughed off her demands. From the time of her first appearance at the De la Croix salon in Stockholm through the rural tours she undertook she received little support from her fellow women. Her public persona differed vastly from, say, Fredrika Bremer, who was at this time travelling in the New World.

Whilst undertaking her public appearances Sophie Sager also earned a living within the emerging textile industry. This included using a foot-operated sewing machine to complete commissions for ‘syrtuter’ (long men’s coats). In 1850 she spoke at the Uppsala spring ball where she was courteously received by Prince Gustaf, who referred to her as a ‘reformatrice’ (female reformer) and invited her to join him in a dance.

Sophie Sager was not just a public speaker: she also published a number of written accounts and pamphlets. The fact that she had only had a partial education was reflected in her use of language and in her spelling. Her dreams of emancipation were embedded in her work entitled Originell bildnings-kalender för riksdagsmän och ynglingar af båda könen, a short satirical document which she self-published in 1850. That same year she also released the more explicitly emancipatory pamphlet Emanciperade fantasier på vers och prosa, printed in two editions.

Sophie Sager’s most comprehensive work was a 114-page short story entitled Bilder ur lifvet eller Fosterbarnets afslöjade genealogi, which she self-published in 1852. This was also released in two editions. In it she dramatises her own experiences whilst attempting to show how the oppression of women leaves them with poor sense of self-worth, despite women being equal to men in their mental abilities. That same year she also released a short pamphlet entitled Privata föreläsningar öfver den sanna emancipationen, again in two editions.

Sophie Sager faced serious opposition in her lifetime and was considered to be grotesque and risible. This was a time when the issue of women’s emancipation was part of the public debate. In 1858, two years after Fredrika Bremer’s conceptual novel Hertha had been published, unmarried women gained the right to emancipation from the age of 25 onwards. Sophie Sager was of age and she wrote immediately to her cousin, who was her guardian, and sought access to her own finances, which she then used in order to emigrate.

Sophie Sager, finally a free woman, left Sweden and headed to the USA in 1854. There she met E. A. Wiener, a professor of music. He was American but of German heritage. Having worked as his housekeeper for a time she then became his wife in 1861. She became very active in the American women’s movement, went on speaking tours, and published A woman’s desire and a Man’s duty in 1861 and A lecture on modern society and the marriage relation in 1880.

The 1916 Nordisk familjebok describes Sophie Sager as an uneducated half-wit “who behaved in a grotesque and risible fashion and wrote genuine drivel”. Another descriptor attributed to her is that of ‘the enfant terrible’ of the women’s emancipation movement. 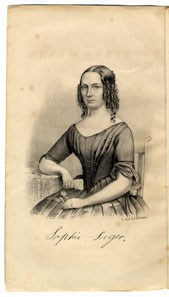