Stina Karlsson was an accordionist whose professional artist name was Bångbro-Stina. She was one of the most prominent female Swedish accordion players of the 1930s and 1940s.

Stina Karlsson was born in Bångbro, Ljusnarsberg municipality in Västmanland in 1909. According to the Aftonbladet newspaper in 1935 she began “to play the accordion already at the age of four and as soon as she had completed her schooling she headed out to tour rural Sweden”. Her brother, Nils Karlsson, had taught her to play the accordion and they also performed together in public at dances and on other occasions in her home region. During the 1920s she met Albin Fernström, an accordionist and music merchant in Filipstad. She moved to that town and took a job as a sales assistant in Fernström’s shop, known as the “Italian” music shop.

Thanks to Albin Fernström’s network of contacts Stina Karlsson was able to pursue a career which made her famous throughout Sweden and led to nationwide tours, performances on the radio and making records. She mainly appeared as a solo artist or sometimes as part of a duo with Fernström, and she even toured with the likes of Anders Granlund, accordionist, known as “Andrew Russel”. Stina Karlsson also toured as Kvartett Bångbro-Stina, with Albin Fernström, Eric Fernström, and Bror Fisk. Another quartet she was part of was Fernström’s dance band.

Stina Karlsson made her radio debut in 1930. That year she also recorded her first record, and between 1930 and 1938 she recorded a total of eight records. This made her the sole female accordionist to become established during the first half of the twentieth century. In addition to the pure accordion music that she played, Stina Karlsson also accompanied some of the contemporary pop-artists of the day on their records, including Athur Rolén and Herbert Landgren. Stina Karlsson, again with Albin Fernström, made recordings in London with the Durium record company as part of a series called Record of the week. From 1932 onwards these were sold in Sweden in newspaper shops and were produced in magazine format, with an illustrated cover and text on the back.

In London Stina Karlsson recorded four tunes – each one composed by Albin Fernström – which were released on two records. Three of these had accompanying lyrics written by the poet Nils Ferlin, who started out as a pop-song writer. Indeed, it was Nils Ferlin’s contacts who had enabled Stina Karlsson and Fernström to make these recordings in London.

During the 1930s and the 1940s accordion competitions were the norm and formed a popular element within the music scene. These competitions were important to accordionists in helping them to advance their careers: they generated attention and could be exploited when advertising tours and concerts. Stina Karlsson participated in several accordion competitions. In 1935 she was the only woman to compete in Svenska Mästerskapet (Swedish championship) in Stockholm, attaining third place. Her involvement in what was a largely male-dominated association met with approval by both the public and the press. The Dagens Nyheter newspaper reviewer noted that: “The female competitor was a jewel. She played ‘Kärleken Dör’ in such a way that it aroused love in various places across the hall”. Around the time of the accordion championship Stina Karlsson recorded her first and only solo record. The album contains her competition entry, the waltz ‘Kärleken Dör’, and ‘Dragspelspolka’ which was composed by Albin Fernström. In 1936 Stina Karlsson once again competed in Stockholm, this time in the Nordic championship. Once again she was the sole female participant and this time she achieved fourth place. Towards the end of the 1930s special championships began to be held for female accordionists. Stina Karlsson does not, however, appear to have participated in the national ladies’ championship in any notable way. During the 1940s a younger generation of female accordionists began to emerge. Nevertheless, Stina Karlsson still achieved fourth place in the 1944 ladies’ championship. She also participated in several local competitions across Sweden, including one at Lorensberg in Gothenburg in 1937 and one at Örebro concert hall in 1943.

Towards the end of the 1940s Stina Karlsson retired from her musical career. There were several reasons for taking this step. She revealed in a newspaper interview that she was increasingly suffering from stage-fright, and that she was beginning to consider her repertoire old-fashioned and out of sync with the public’s taste. There also seem to have been certain personal problems which led to her withdrawal from public life.

Stina Karlsson then began to lead a more retiring life after years as a well-known accordionist. She left Filipstad in the 1950s and moved to Viby near Vretstorp, Närke. There she worked as a housekeeper for Axel Dahlgren, a farmer, and later the two got married. Dahlgren died in 1963. Stina Karlsson then left Viby and moved to nearby Sköllersta, once again becoming a housekeeper for a man whom she later married, namely John Eriksson, a farmhand and industrial worker. She lived with John Eriksson in Sköllersta until her death.

Stina Karlsson never performed again in public after retiring from public life but she carried on playing the accordion in private. In Viby she played with musicians from the surrounding area and after moving to Sköllersta she began to give accordion lessons there.

Stina Karlsson’s repertoire was typical of accordionists of her generation: it was a mix of dance music, pop songs, and numbers to show off her solo talents which had been specifically composed for or arranged for the accordion. She also composed a few pieces herself, tunes with titles such as Vals på Höjda, Nordmarksvalsen and Bångbro-Stinas vals. As far as is known none of her compositions have survived in written form or in recordings.

Stina Karlsson died in Sköllersta in 1982. By then she was a forgotten star accordionist but since then she has become the focus of some attention and has been reinstated as a representative of the heyday of female accordionists in the mid-1900s. 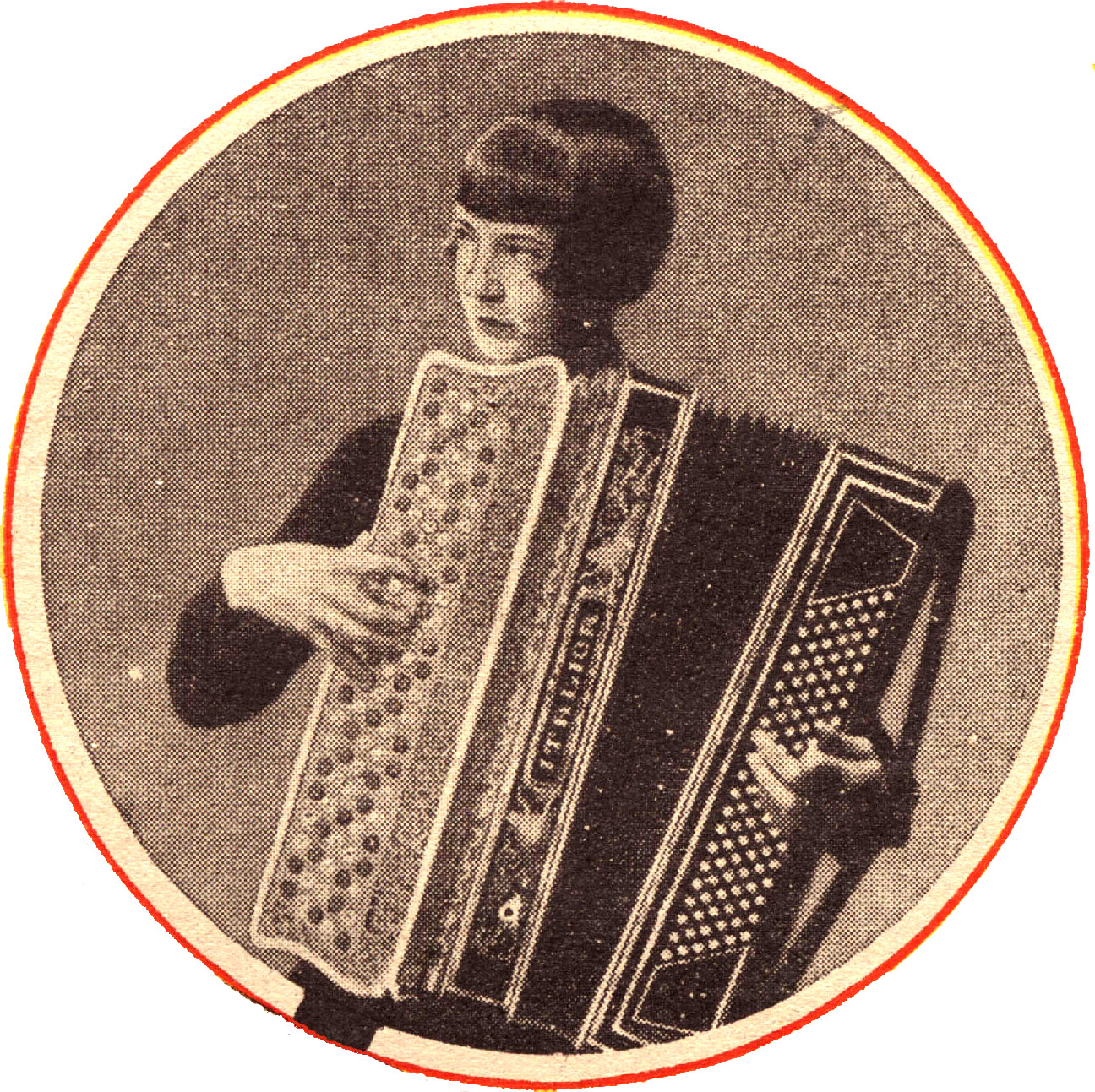 Stina Karlsson, Bångbro-Stina, on a cover of a recording in the Veckans Skiva series, 1932. Image source: Wikimedia Commons (from the collection of Fredrik Tersmeden)