Stina Sundell was a pianist and a piano teacher who was active throughout much of the twentieth century.

Stina Sundell was born on 24 January 1902 into the Asker congregation in Örebro county. Her father, Lars Johan Sundell, was a legendary fiddler and public school teacher, and her mother was Gerda Mathilda Boström, also a public school teacher. Music and teaching thus formed natural influences throughout her childhood in Västervik. She began her professional training in 1920 when she took three piano lessons for Kerstin Strömberg, before being accepted into Lennart Lundberg's piano class at the Royal Swedish Academy of Music conservatoire (now the Stockholm Musikhögskola; college of music). During her five years of study at the conservatoire Stina Sundell was taught how to harmonise by Oskar Lindberg and how to conduct by Olallo Morales. She completed her studies in 1925, armed with a jeton and the Jenny Lind stipend which enabled her to head abroad.

Stina Sundell chose Vienna as her study-abroad destination. This may have been because her fiancé, Gunnar Jeanson (a music researcher who died before his time), had just returned from there. Jeanson had furthered his knowledge of the newly emerging Viennese school with Egon Wellesz, a former student of Schönberg. It is very probable that Jeanson remained in Vienna until August 1922 in order to attend what – in music history terms – was an important event in Salzburg. Wellesz was namely one of the two founders of the International Society for Contemporary Music (ISCM), and his fourth string quartet was on the programme. The ISCM project was of great interest to both Gunnar Jeanson and Stina Sundell – who quickly joined the society – as evidenced by the fact that Jeanson had already, at the second ISCM gathering in 1923, announced the existence of a newly-founded Swedish section of which he was the chair. He remained in post until 1933 when he was appointed head of the concert hall in Stockholm. One of the people Stina Sundell met at the 1926 ISCM gathering in Zürich was Carl Nielsen who suggested that she might study his apparently quite technically difficult to play piano suite op.45 “Den luciferiska” which he had written seven years earlier. She subsequently performed the piece at her Stockholm debut, held in the auditorium of the Royal Swedish Academy of Music on 31 January 1930.

Stina Sundell had already made her Vienna debut in 1925 and spent the year of 1926–1927 studying music theory, as well as composition to a lesser degree, with Alban Berg, who was also a former student of Schönberg. Further, Stina Sundell took piano lessons with Liszt’s former student Emil von Sauer in 1926 as well as – behind Sauer’s back – with Eduard Steuermann, a Polish former student of Busoni who had premiered the Berg sonata. Under Steuermann’s tutelage Stina Sundell learned the complicated art of phrasing and how to tease out the clarity of the musical passages. Stina Sundell’s study trip ended in Berlin in 1928. There she took piano-teaching lessons from A Liebermann.

On 30 January 1929 Stina Sundell performed at the Stockholm concert hall. She, along with the Swedish royal philharmonic orchestra and Václav Talich, presented a few movements from the Italian composer Alfredo Casella’s Scarlattiana för pianosolo med orkester. This piece was based on both genuine and imagined Domenico Scarlatti quotes in the old style.

The same year that Stina Sundell made her debut performance at the Royal Swedish Academy of Music auditorium she also began working as head teacher at the private conservatoire in Stockholm. Later, after retiring from her post as teacher at Musikhögskolan, she returned to the conservatoire to serve as a director of studies and head special-subject teacher. Prior to that she had also spent a twenty-year period from 1935 to 1955 teaching at Lundholm’s musikinstitut in Stockholm. Further to that she had also served as chair of the review panel of Svenska Pianopedagogförbundet (EPTA Sweden; Swedish piano-teachers’ association). In 1963 Stina Sundell became an elected member of the Royal Swedish Academy of Music, number 706, and in 1972 she was awarded the academy’s medal for the promotion of the art of music. Stina Sundell was promoted professor in 1977 and in 1984 she was a recipient of the royal Litteris et Artibus medal.

Stina Sundell’s fiancé Gunnar Jeanson died in 1939, aged only 40. In 1949 she married Eric Linné, an artist and designer, and they remained married until her death.

Tore Uppström’s article in the Svenskt Biografiskt Lexikon delineates Stina Sundell’s engagement as a solo pianist. In addition to her 41 performances in Stockholm – 39 of which were with the philharmonic orchestra and two with Radiosymfonikerna – Stina Sundell also gave concerts in Gothenburg, Helsingborg, and Malmö. She appears never to have performed Grieg’s and Schumann’s piano concertos in Stockholm although Uppström lists them as part of her repertoire. The following pieces also belonged to her repertoire, listed alphabetically: Kurt Atterberg’s reconstruction of Wilhelm Stenhammar’s first work, in 1946; Johan Christian Bach’s piano concerto in B-flat major op 14:4 in 1952; Béla Bartok’s nr 3, in 1955 and 1958; Ludwig van Beethoven’s nr 4 in 1930; Gabriel Fauré’s Ballade, in 1945; Manuel de Falla’s Nights in the gardens of Spain, in 1931; Joseph Haydn’s G-major concerto, in 1942; Nicolai Lopatnikov’s nr 2, in 1936; Wolfgang Amadeus Mozart’s nr 15 and nr 18, both in 1942; Francis Poulen’s Aubade, in 1948; Sergei Rachmaninov’s nr 4, in 1937; Maurice Ravel’s G-major, in 1936 and 1955, and Lefthand concerto, in 1942; and finally Igor Stravinski’s Capriccio, in 1952.

Stina Sundell stopped performing following a complicated arm-break in 1959 but she carried on teaching. Ten years later Musiksverige began to make tentative enquiries about a potential ‘comeback’. Sveriges Radio’s music department tried to help her back onto the mill during the 1970s by commissioning short portraits of artists for which she supplied the piano music. Success was achieved in 1982, shortly before Stina Sundell’s 80th birthday, when she performed a complex programme of music which included a new perspective on the Alban Berg piano sonata, a piece with which she had a personal connection. The Grünewald hall was full of admiring students when Stina Sundell performed her jubilee concert. Later that year she received the Svenska Grammofon prize for her newly-released piano album. Sadly, due to breaking her leg just before she was due to start recording a Mozart concerto with Esa-Pekka Salonen and Radiosymfonikerna she never made any recordings with an orchestra. By the time she had recovered from the broken leg the motivation to perform had gone and she never made another comeback. Nevertheless, she remains so fondly remembered that there have even been attempts to form a special society in her memory. The takings from her 80th-birthday concert were used to set up a stipend in her name.

Stina Sundell possessed a rare ability to engender a natural and relaxed joy through her work which was peppered with personal memories and marked by her straightforward musicality and unerring sense for style. She died in Stockholm in 1993. Her remains lie at the Woodland Cemetery in the capital. 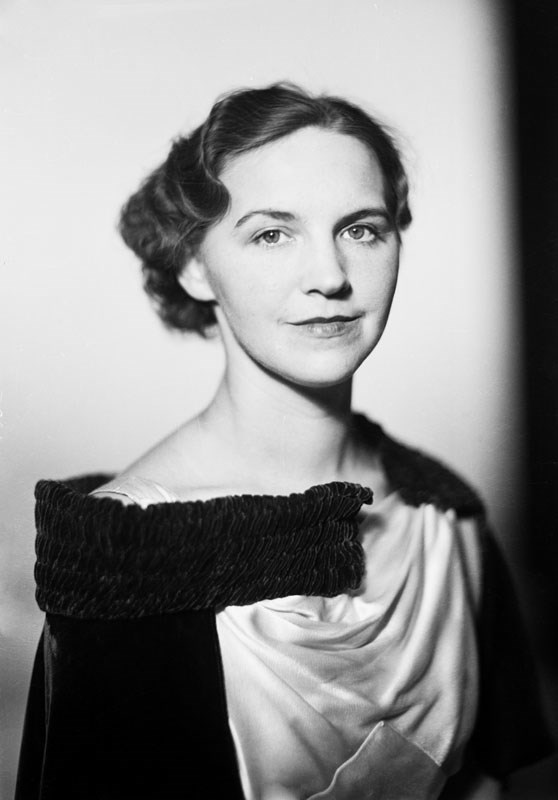