Therese Kamph was a teacher and the principal of the Kjellbergska girls’ school in Gothenburg. She worked to professionalise the education of girls. One important goal was also to prepare girls for a life in which they earned their own livings.

Therese Kamph was born in 1836 on the estate Vidön near where Klarälven river joins Lake Vänern. She was the next youngest of nine siblings. Their father, Per Fredrik Kamph, was a regimental officer. He died when she was only four years old. Their mother Louise Kamph, née Wollert, eventually moved to Karlstad with her children. Therese Kamph received her first schooling from an older governess who was to become very close to her. She continued her schooling at the Weinbergska girls’ boarding school in Karlstad until she was 15 years old. After that, in 1852—1854 she was sent to Hamburg for further studies for a Mrs Marsen at her ”famous educational institution”. This was probably some kind of girls’ boarding school specialising in higher language studies. Therese Kamph had already clearly the ambition to become a teacher herself — one of the few ways of earning a living open to women from her social class who had neither a father nor a husband to support them.

When she returned home from Germany as an 18-year-old, she started a girls’ boarding school together with her mother and her older unmarried sisters Augusta, Josefine and Emilie, in a property their mother had acquired some years earlier in Norra Kyrkogatan in Karlstad. Their mother advertised frequently in the local press and in these advertisements it emerged that tuition was given in Christianity, Swedish, German, French, English, history, geography, counting and writing. In addition, handicrafts and drawing were included, and singing and piano lessons were also offered for an extra fee. The language of social intercourse at the school was German, which underlines Therese Kamph’s good knowledge and skills in that language. In the advertisement, their mother emphasised that her daughters were thoroughly experienced teachers, and for more information, readers were referred to the principal of the Karlstad grammar school, Dean Millén, whose support had obviously been ensured. Despite this, the recruitment of pupils was problematical and the enterprise could not carry its costs. After only a few years, the girls’ boarding school closed. Therese Kamph became a governess instead at the home of relatives and later at the home of a Colonel Mörner.

After a new journey to Germany some years later, Therese Kamph, her mother and sisters moved to Kristinehamn. There she opened a new ”educational and cultural institution for girls of all ages” in 1864 in Gamla kyrkogatan, with the offer of full board or half board. It is clear from the advertisements that the emphasis here was also mainly on languages. However, general natural history, botany and zoology had now also become part of the curriculum, as had arithmetic and hygiene, and it was especially underlined that the teaching and courses at the higher levels would be adapted so that a final examination from the school matched the entrance requirements of the new education at the teacher training college for schoolmistresses, later called the Kungliga Högre lärarinneseminariet in Stockholm. The idea was thus to create an education for girls who were considering becoming teachers.

For more information, readers were referred to well-established names in middle-class circles in Värmland, among others a Doctor Pallin in Filipstad. He was the husband of Therese’s sister Fredrique and also the brother of Regina Pallin — the assistant principal at the Högre lärarinneseminariet in Stockholm — and also to Rudolf Pallin, a historian, textbook author and at that time a lecturer at the Högre lärarinneseminariet. In new advertisements from Therese Kamph later in the summer, a new name had been added to the list of references: Jane Miller-Thengberg, the principal of the Högre lärarinneseminariet in Stockholm. Therese Kamph obviously had the ambition to develop her school in Kristinehamn into something other and more modern than just a traditional girls’ boarding school for middle-class family girls, and she had also succeeded in establishing contact with a representative in Stockholm of the new state education for women teachers. Only three years later, she handed over her school enterprise however to two other women and it was later discontinued. Why she gave up is difficult to know, but probably it was a case of financial loss this time too. Kristinehamn was only a small town. The era of girls’ boarding schools was also nearing its end as the public school system was expanded and the view of education for girls changed. Instead, new girls’ schools developed in more and more places in Sweden.

In 1870, the family moved to Stockholm instead, where Therese Kamph attended the Högre lärarinneseminariet. Their livings were earned by the letting of rooms undertaken by their mother while Therese Kamph and her three sisters worked as private teachers. She was clearly successful in her studies and was found to be a clever and engaged teacher. She soon left Stockholm, in 1872, after having been offered the post of principal of the Kjellbergska girls’ school in Gothenburg, a position she held until her death in 1884.

The Kjellbergska girls’ school was a private school founded in 1835 and run on donations from the wholesale merchant family Kjellberg in Gothenburg. Its goal was to provided higher education for less well-off girls from the educated classes, bring them up to be ”well-adapted social human beings” and to prepare them for a life in which they earned their own livings. This was a goal that suited Therese Kamph well. She had solid experience of what it meant to cope with earning her own living as an unmarried woman.

Therese Kamph thus engaged herself with great energy in her assignment as school principal. The goal was for Kjellbergska girls’ school to be one of the best schools in the country and during her time it underwent comprehensive development. When she arrived in 1872, the school had 40 pupils in three classes of two years each; the education offered there thus took six years. She immediately introduced a fourth two-year class. In 1876, she was granted a travel scholarship by the school board and visited a large number of publicly run girls’ schools in Germany and Switzerland. Her impressions of them resulted in yet another two-year class, though now for the youngest children up to the age of eight. The idea was among other things that older pupils who were themselves considering becoming teachers could be offered teaching practice among the youngest pupils. The education at the Kjellbergska girls’ school was now extended to ten years.

In 1884, the number of pupils had increased to 160, the teaching was much reformed and the school had the education of schoolmistresses as its main goal. It therefore had a theoretical orientation. Simultaneously, the demands made on teaching qualifications were gradually raised in the country as a whole. For Kjellbergska pupils to be able to compete with the pupils from the Högre lärarinneseminariet in Stockholm for appointments, Therese Kamph pushed through the setting up of a new two-year pre-teacher training class, open to those who had completed the school’s highest class.

Therese Kamph was also engaged nationally in the girls’ school issue. So-called general girls’ school meetings were held in various places in Sweden, several times around the end of the 1800s, to investigate and discuss matters to do with the education of girls. Therese Kamph participated as a speaker at the first two meetings, in Stockholm in 1879 and in Gothenburg in 1882, when she was also elected to the girls’ school meetings’ central committee. During the two years she had time to be active there, she also worked among other things to set up a pension fund for girls’ school teachers.

The Kjellbergska girls’ school became generally more and more appreciated and the queue to the school grew. Despite the fact that the donors paid in extra funds, it was sometimes difficult to make the school economy balance and they were gradually compelled to introduce pupils’ fees. Many pupils came however from poor families and caring for them was always an important matter for Therese Kamph. Among other things, she founded the so-called February Society in 1879, a needlework society the aim of which was to make clothes for poor girls’ school pupils.

Therese Kamph never married and thus had no children of her own. Like several of her colleagues, she had pupils from the school boarding in her home. She also shared her home with her sister Augusta who was 17 years her senior. Another relative who lived in her home for long periods from 1873 onwards was Frida Pallin, the youngest daughter of her sister Fredrique. Like Therese Kamph, her niece had been made fatherless and her mother was then living in Uppsala. Frida Pallin was sent to her maternal aunt in Gothenburg to attend the Kjellbergska girls’ school. Frida Pallin later became the principal of Mathilda Hall’s girls’ school in Gothenburg.

Therese Kamph was very devoted to and involved in everything she undertook. She owned a good capacity for leading and inspiring her personnel with enthusiasm. She was versatile and practical, and she had great authority although she was able at the same time to show great tenderness and empathy towards those who needed it. Hard work and many cares started however to wear down her physical health. She suffered from overwork and in 1879 she was struck by a severe bout of pneumonia from which she nevertheless recovered, continuing afterwards with undiminished energy. When the autumn term of 1884 had been under way for a few weeks, she was however hit by a new severe bout of pneumonia.

Therese Kamph died on 19 October 1884, in the middle of her active life, after only a few weeks’ illness. Grief over her death was profound at the Kjellbergska girls’ school. The funeral in Haga Church in Gothenburg received a great deal of attention and gathered many people in attendance. The pre-teacher training class had just gotten started when Therese Kamph died and it was wound up after only two years, because without her it was difficult to carry on any further with that project. The February Society that she had founded was dissolved in 1941 and with the society’s remaining money, a Therese Kamph scholarship fund was set up instead. The fund still awards scholarships today through the Gothenburg municipality to young people studying aesthetic subjects who wish to improve themselves through studies abroad.

Therese Kamph rests in the Western Cemetery in Karlstad. 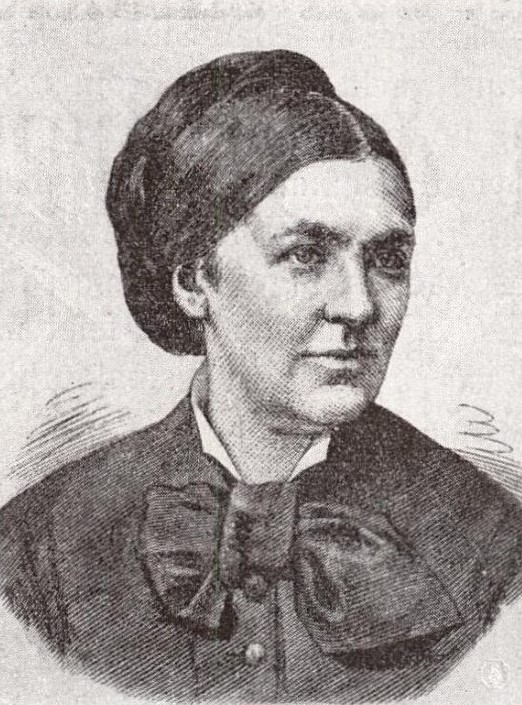