Thrina Lysell was born in Varberg in 1764. She was the daughter of master cooper Nils Holm and his wife Christina Lundström. Nothing is known of her education. One of her brothers became a priest, which implies that there were opportunities for learning within the family. Thrina Lysell married Anders Niklas Lysell, an inn owner, and later commercial bookkeeper. In 1795 he took over an inn with a haulage contractor firm in Gothenburg. By 1802 he had to sell the business due to growing debts. He went bankrupt in 1815, at which time he had debts incurred in the well-known “Hallska massan”, which concerned the bankruptcy of wholesale merchant John Hall the younger. Anders and Thrina Lysell had three children together, Nikolaus, Anna, and Carolina. After a period of ill health Anders Lysell died in 1818.

Napoleon’s continental blockade imposed against Great Britain had given rise to a unique economic boom in Gothenburg during the years 1807-1814. However, the financial crisis which followed the lifting of the blockade subsequently caused a deep economic depression for the town, particularly between 1815 and 1819. A great rise in unemployment and bankruptcies ensued, particularly hitting those citizens whose livelihoods were trade-related. As a result of bankruptcy and the subsequent death of her husband, Thrina Lysell was forced to seek gainful employment as a teacher to provide for her family. By 1815 she had already been hired by the newly-established Fruntimmersförenings (women’s association) school for girls, and both of her daughters assisted her in her work from the outset. For a long time these three women were responsible for the majority of the teaching at the school.

The school had been established through the setting up of an ”Association af Fruntimmer” (association of women). The school’s remit was to impart “an unaffected and thorough education to the daughters of people of rank and functionaries within Gothenburg town, who are in need of these benefits”. The goal was to assist those families which were unable to provide their daughters with the appropriate education relevant to their social standing due to the economic downturn. Initially the school was called “Pensionsinrättning för fattiga flickor” (a pension foundation for poor girls) and operated without fees. When the school started it only had a few pupils but it really took off in 1819 once several of the town’s wealthy women promised to provide a fixed annual sum. Younger women from the same social class were encouraged to produce handicrafts to be auctioned on behalf of the school board, or to serve as raffle prizes, in order to ensure the school’s survival. Well-known gentlemen, such as doctor Pehr Dubb and Bishop Carl Fredrik af Wingård supported the school, but the majority of the school board consisted of women who were actively involved in the enterprise. The teaching was initially limited to those skills which were required in “a frugal home”, namely knowledge of Christianity, writing, counting, basic sewing, baking, and brewing. The ages of the pupils was set between 6 and 12. In 1824 Queen Desideria declared that she wanted to become the school’s patron. During the 1840s and 1850s the school’s financial status became more stable through an increase in donations.

Classes at Fruntimmersföreningens school for girls were held at Thrina Lysell’s home at Vallgatan 24. She and her daughters did all the teaching except for Christian knowledge lessons, for which they had the support of a priest. In 1825 Thrina Lysell applied for permission to teach at least 18 girls in order that she “could in such a way earn a full month’s wages to provide for herself”. Permission was granted in 1826 and the following year the number of pupils was set at 24, along with a fee per student of two riksdaler per month. Thrina Lysell’s daughter Carolina replaced her as director of the school in 1830.

During the 100th anniversary celebrations of the school in 1915 a description of how the school worked was obtained, based on the memories of a former pupil from the 1840s and 1850s. It provides an insight into daily life at the school:

“The premises consisted of the director’s home. In one of the rooms there was a long gateleg table around which both the teacher and pupils would sit, the teacher at the short end, the older pupils along the sides on long benches, and the youngest on small stools. When homework was to be presented the teacher would seat herself on a chair in the middle of the room so that those children who had completed the same homework could stand around her in a circle. Much of our time was spent on handicrafts. In addition to that we learned the catechism, biblical history, reading, how to write and count as well as a bit of geography and Swedish history. Mrs Lysell still taught in the 1850s, mainly in handicrafts.”

In 1850 the governing board awarded Thrina Lysell and her daughter a bonus of 50 riksdaler banco. Eight years later, in 1858, Carolina Lysell was given a golden medal for her 43 years of service.

Thrina Lysell lived to be a notable 102 years, 4 months and 10 days old. She died in Gothenburg in 1866. The inventory of her belongings reveals that she lived a Spartan life. According to Fredberg’s Det Gamla Göteborg she was a “venerable woman” who, during the last years of her life, “could recount events from the reigns of five different kings with a clear and sharp memory. And she had an incredibly good influence on the hundreds of children that she taught.” 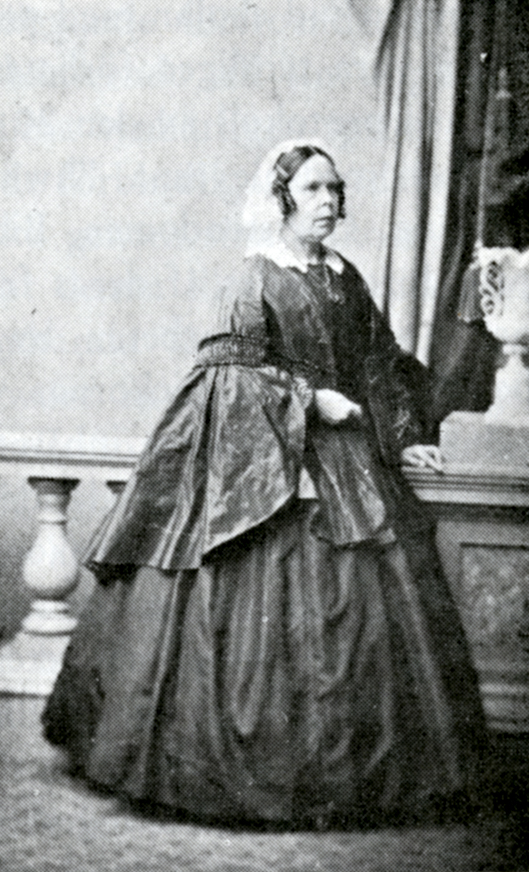