Tora Nordström-Bonnier was an early female journalist, known as a ‘pennskaft’ who was multitalented and most famous for her travelogues from different continents written in the period immediately following the Second World War.

Through the Svenska Dagbladet circles Tora Nordström-Bonnier met the man she went on to marry, Eric Ramm-Ericson. His father owned Lunds Dagblad. The couple married in 1918 and initially moved to Gothenburg where they both worked for Göteborgs Morgonpost. Tora Nordström-Bonnier also wrote for the journal Scenen: tidskrift för teatern at that time.

Working opportunities for female journalists outside the big cities were not particularly favourable and just as Tora Nordström-Bonnier and her husband were preparing to move to his home town of Lund she began to write for Lunds Dagblad. Her husband meanwhile became the acting director of his father’s newspaper in 1924. The following year the marriage ended.

In 1926 Tora Nordström-Bonnier returned to Stockholm and began to work for Dagens Nyheter where she was one of the very few women on the editorial staff. In her memoires Eva von Zweigbergk, a colleague of Tora’s, has described her as “the elegant, secretive creature, who discussed clothes, art, and travel with an ironic cool wit”. Tora Nordström-Bonnier’s portfolio also included book- and film reviews for the culture pages and the Sunday inserts.

At Dagens Nyheter she met the publisher Tor Bonnier, and they got married in 1929. She resigned her post the following year in order to dedicate herself to her family, which now included their son. She also began to write for herself. In 1933 she released her first novel, entitled Juninatten, which was later adapted for the big screen. The book was followed by another two novels, and later by travelogues and social commentary from her global travels.

Following the peace of 1945 the family spent almost a year in a small town south of Santa Fe in New Mexico. The Expressen evening newspaper, newly established the previous year, published her letters from Mexico. In 1946 she released a book called Just for fun, in which she collated all these letters. Tora Nordström-Bonnier continued to supply editorials and cultural items to Expressen until 1948.

When she began to report on the politics and culture in Australia, however, she went back to Dagens Nyheter in 1948. She undertook a journey in 1950, travelling in Fredrika Bremer’s footsteps, to mark the centenary of Bremer’s 1849–1851 journey which had preceded Bremer’s book, Hemmen i den nya verlden. Tora Nordström-Bonnier’s journey had originally been suggested by Elin Wägner who, on being accepted into Svenska Akademien (the Swedish Academy), was tasked with writing a biography of Fredrika Bremer. Elin Wägner fell ill and died before she could realise the project. Thus Tora Nordström-Bonnier retraced Bremer’s travels through 27 American states by car in the company of her son Simon, who did the driving. The resulting book, entitled Resa kring en resa i Fredrika Bremer’s fotspår and published in 1950, offered reflections on how America had changed from the country which Fredrika Bremer had experienced.

The following year Tora Nordström-Bonnier’s marriage to Tor Bonnier ended. She then moved to California. She continued to provide travelogues for Dagens Nyheter – which she also published in book form – from places such as Japan, Pakistan, and India. She also worked as a translator of American literature. Towards the end of her life she was living in Cagnes-sur-Mer, on the French Riviera, but every summer she returned to Bisslinge farm and Qvallsta manor where her sons lived. 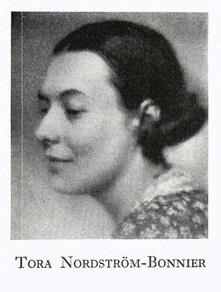