Ulla Fogelklou-Skogh was a silversmith and a designer who was active at a time when Swedish handicrafts were increasingly gaining international recognition.

Ulla Fogelklou-Skogh was born Ulla Fogelklou in Helsingborg in 1913. Her father, a chief fire officer named Holger Fogelklou, died when she was 15 years old. Her mother Elsa, née Olsson, was thus left a widow with four children. Through the financial help of their maternal grandparents the children were able to gain an education. Ulla Fogelklou-Skogh moved to Stockholm in 1932 to begin her training in metal chasing at Högre konstindustriella skolan (advanced school of applied arts), one of the main departments within Tekniska skolan (now Konstfack, college of arts, crafts and design). On graduating, three years later, she received commendations for her decorative models and chisel work and was also awarded a stipend from the Ulla Fröberg-Cramer fund.

At the spring 1935 Tekniska skolan student exhibition the public first became acquainted with the silver beakers Ulla Fogelklou-Skogh created. In the 28 May 1935 edition of the Svenska Dagbladet newspaper the art critic Gotthard Johansson wrote: “One should not really review student pieces but in some cases it can be justifiable to name names. […] Amongst the silver pieces, which come across as unusually rewarding overall, one’s eyes are captured by the work of the imaginative and talented female artist, Ulla Fogelclou [sic], whose Simson-themed chalice is exquisitely composed”.

After completing her training Ulla Fogelklou-Skogh received a stipend from Svenska Slöjdföreningen which allowed her to undertake study trips to both Germany and Italy. Once she had returned to Sweden she began to work for Atelier Borgila in Stockholm. The company had been set up by Erik Fleming, one of the leading Swedish silversmiths. He had attended the student exhibition where he had seen Ulla Fogelklou-Skogh’s work. As an employee of Atelier Borgila she spent an intensive year working with ecclesiastical silver items, both chased and forged. One of her pieces was a pretty bridal crown inscribed: “Det är en ros utsprungen, som hon själv bär vid juletiden” (Lo, a rose has bloomed, which she wears at Christmastime). The crown was purchased by Hedvig Eleonora church congregation but was stolen shortly afterwards. A new copy was then fashioned.

During this time Ulla Fogelklou-Skogh also produced her own pieces with which she entered competitions. One of these was a silver tobacco box with a lid decorated in relief with which she won the Stockholm newspaper Nya Dagligt Allehandas competition for honorary gifts in 1937. At this time she and her husband, interior designer Svante Skogh, returned to Helsingborg. Ystads Metallindustri (later known as Ystad-Metall) commissioned Ulla Fogelklou-Skogh to produce high-quality items for the 1937 World’s Fair held in Paris. Two of these pieces were a sundial in bronze which was named Ikaros och Daidalos and a silver mirror called De fem sinnena. Both of these were displayed within the Swedish pavilion in Paris and garnered fine reviews in the press. She continued working intermittently with Ystads Metallindustri until the 1960s.

Shortly after the move to Helsingborg the Skogh couple set up an interior design company and shop called Genius. Their centrally-located premises lay on Drottninggatan and the couple’s talents complimented each other well. However, as a consequence of the economic decline which followed the outbreak of the Second World War Genius folded in 1940, which was one year after the couple’s first daughter was born. The family then moved to Värnamo. One reason for this destination was that Värnamo was strategically located within “Möbelriket” (the furniture kingdom) where many of Svante Skogh’s clients lived.

Despite her success with silverware, Ulla Fogelklou-Skogh found herself drawn to working with other materials and techniques. A few years into the 1940s she revealed that it had always been model-making and drawing that had lain closest to her heart. Silversmithing was too confined by form and chasing was too complicated, she felt. Although Ulla Fogelklou-Skogh did produce silver items for Värnamo and Halmstad churches during the 1940s she began to focus on working in other materials. Bronze and pewter had formed part of her output since the beginning, and she had created the odd wooden reliefs for her husband’s cupboards, but during the 1940s Ulla Fogelklou-Skogh gained most attention for her glass and limestone productions.

Further to its furniture industry Småland is also known for its glassworks and Ulla Fogelklou-Skogh belonged to a group of designers who created motifs intended to be etched, blasted, or polished onto mirrors and glassware. The main source of commissions was AB Nybrofabriken in Fröseke and Glössner & Co in Stockholm. Plenty of cafés, theatres, public baths, banks, and other places throughout Sweden display Ulla Fogelklou-Skogh’s decorative patterns. Rapps konditori in Norrköping is one such example, Industrihotellet in Huskvarna is a second, and the main doors of Martina Nannes Glas & Porslinsaffär in Halmstad is a third. Svenska Amerikalinien’s vessel, M/S Stockholm, is a fourth example, on which the bar in the tourist-class section is furnished with 12 windows each representing a sign of the zodiac, as well as a large bookcase and a mirror. The new M/S Kungsholm and Svenska Ostindiska Kompaniet’s freight vessel, M/S Sumatra, were also decorated by Ulla Fogelklou-Skogh in the second half of the 1940s. The latter vessel was furnished with reliefs she had made based on Evert Taube’s ballad “Byssan lull”.

During the early 1940s Ulla Fogelklou-Skogh altered her signature from a stylised “UFS” monogram to a “US”, although she had been married to Svante Skogh since 1935. The couple were well-known cultural celebrities in the Väranmo area and in the early 1950s they added a large studio out of corrugated cardboard planks to the old school in Helmershus, just outside the regional centre. Contemporary articles reveal, however, that Ulla Fogelklou-Skogh was torn between her career as an artist and the burden of weight incurred by running a household and, after 1943, three small children. She also needed time as a member of Svenska Slöjdföreningen’s trade section and as chair of Fredrika-Bremer-Förbundet’s Värnamo circle. Meanwhile, Svante increasingly came to take on the mantle of the most productive furniture designer of the Swedish welfare state. His career became the priority.

In 1963 Ystads-Metall launched a brand named Antikjärn which included relief work, book stands and other cast iron items. Ulla Fogelklou-Skogh was the creator of several of these designs. As on many previous occasions the dominant motifs were taken from Antiquity and the zodiac.

In 1965 the Skogh couple suffered the tragedy of losing their daughter in a car accident. Ulla Fogelklou-Skogh sculpted a relief to adorn her daughter’s tombstone in Västervik. News of their daughter’s death arrived just after divorce had been finalised between the Skoghs. Shortly afterwards Ulla Fogelklou-Skogh moved to Scania, settling in Lund. She began to work as a drawing teacher in Eslöv in order to make a living but she remained active as a designer as well.

Throughout her career Ulla Fogelklou-Skogh also made clay sculptures. She created book stands, sculptures, and wall-hangings in clay and often painted them in polychrome. Although she tried to earn money from these pieces this was not the medium for which Ulla Fogelklou-Skogh gained most attention. Nevertheless, towards the late 1960s, the Helsingborg ceramic company DECO launched a few so-called flower girls based on models created by Ulla Fogelklou-Skogh. These became her most widely disseminated works, regardless of the fact that these flower girls did not garner the same attention from progressive form and design writers as her silver and glass items had gained.

Painting watercolours became Ulla Fogelklou-Skogh’s main medium during the final twenty years of her life and her paintings were displayed at several exhibitions throughout Scania.

Ulla Fogelklou-Skogh died in 1986. The Fogelklou family grave at Pålsjö cemetery in Helsingborg, where she lies, had already long been adorned by a bronze angel relief which she had designed. 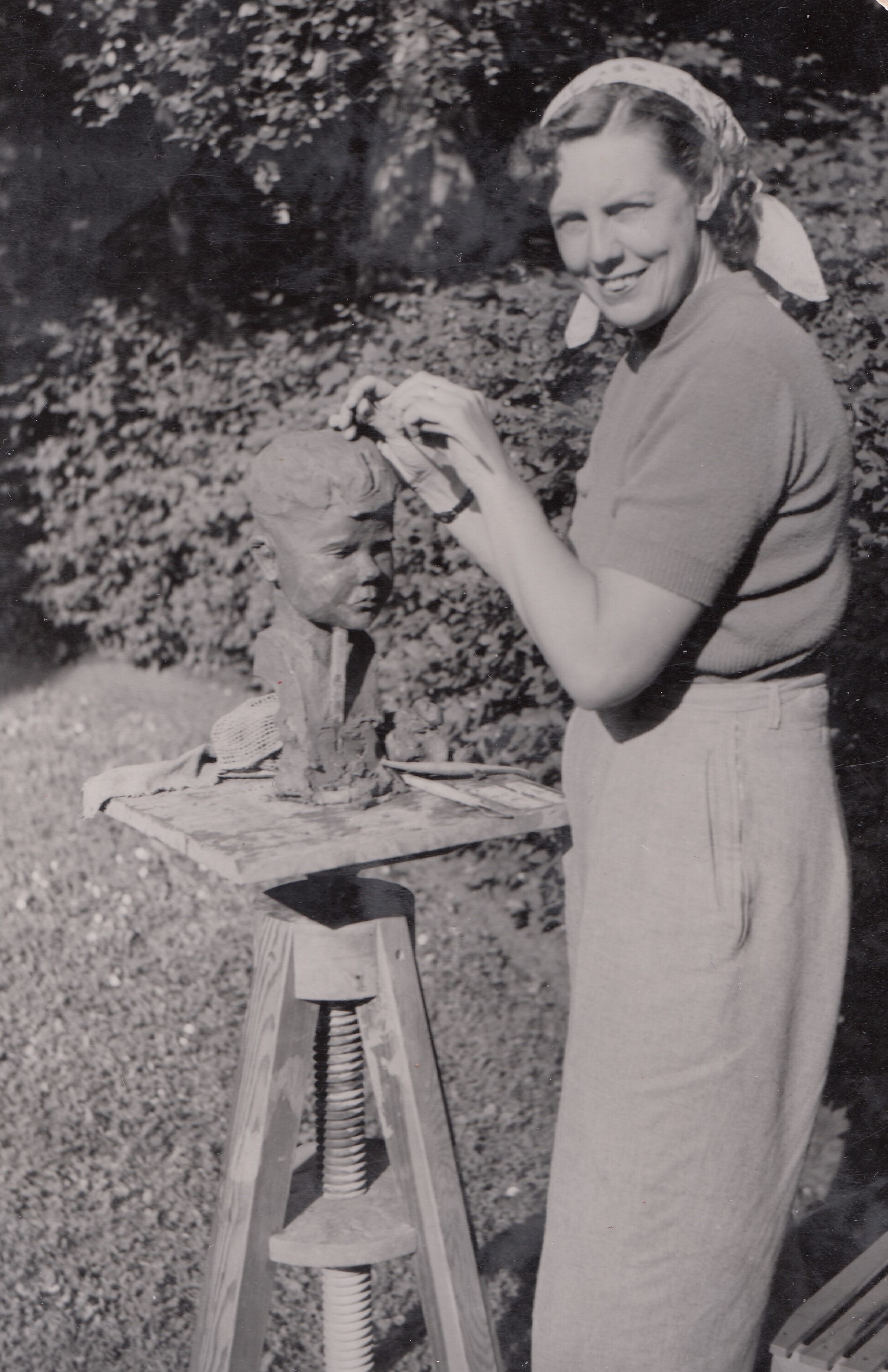