Ulla Poppius was one of the foremost women educators in adult education during the 1950s, 1960s and 1970s. She defended the rights of the elderly, the functionally handicapped and the mentally ill to studies on their own terms and in cooperation with universities and adult education organisations.

Ulla Poppius was born in 1919 in Karlskrona, where her father Sigfrid Leander was an officer. Her mother Calla, née Mårtensson, was trained as a physical education teacher with her roots in the Karlskrona archipelago. Periods of Ulla Poppius’ childhood were spent by the family on the island of Senoren. She started primary school there with her maternal grandmother as her teacher. Eventually, they moved permanently to Karlskrona, after Sigfrid Leander had left the army and become a museum employee and the county antiquarian. He burned for free pedagogy and undertook many lecture tours round Blekinge. Sometimes his daughter was allowed to accompany him, and his lectures made a strong impression on her. When Ulla Poppius was eleven, her mother died, shortly after her youngest sibling’s birth. Sigfrid Leander later remarried and Ulla Poppius had two more siblings.

Ulla Poppius attended a girls’ school and she matriculated in 1938 at the Karlskrona grammar school. After that, she moved to Lund to study. Lectures continued to attract her there also and she often attended the student evenings at the Akademiska föreningen, at which well-known cultural personalities, politicians and others were invited to lecture. In 1942 she gained her B.A. Degree in art history, Romance languages and Russian. Her first appointment was at the editorial office of the lexicon Svensk uppslagsbok in Malmö. During her time in Lund, she also met her husband, Hans Poppius, with whom she eventually had three children.

In 1947, the family moved to Stockholm and one year later, Ulla Poppius became the secretary responsible for studies at Fredrika-Bremer-Förbundet. Here for the first time she came in contact with adult education, organised lecture tours and met people who were involved in education in various ways. The end of the 1940s was a very expansive period for non-state-controlled education, since the state had changed the regulations for state funding and greatly increased support to adult education. As a result, a number of new adult education organisations were started and one of them was the Liberala studieförbundet (LiS). Ulla Poppius applied there and in 1949 she was employed as their secretary of studies. In her new role, she came into serious contact with education that was anchored in adult education movements, and her assignment as the only employee at the office was to develop study groups. Carl Cederblad, a lecturer, popular educator and grammar school teacher from Uppsala, was the director of studies and person with the ultimate responsibility. In 1954, he died suddenly and unexpectedly. Sigfrid Leander, who was then the principal of the Stockholms Arbetareinstitut, was chosen as the new director of studies for LiS.

Ulla Poppius thus had her own father as her director, an arrangement that suited them both however, according to her information. In 1960, her father resigned and Ulla Poppius took over the assignment as director of studies. Popular education was however a very male-dominated world and she was the only woman director of studies in adult education circles, a situation that was not always easy to handle. She often felt it was difficult to make her voice heard at meetings with her male director of studies colleagues. LiS was however one of the first adult education organisations with study groups for older people, with syllabi like Aldrig för gammal att lära in 1958, and Vi som fyllt 60 in 1961. Pioneer contributions were also made for people with mental ill health and she organised study groups for people confined to mental hospitals.

Ulla Poppius remained as the director of studies at LiS until 1963, when she was recruited for another assignment: to lead the construction of a new office for lecture activities in the country, namely the Folkbildningsorganisationernas föreläsningsbyrå. It was an amalgamation of four older lecture enterprises with their various forms of funding, to create one single unit with state funding. The reform meant that not only lecture organisations but also adult education organisations could contribute to the lecture activities.

Ulla Poppius considered it an important task to try to achieve pedagogical renewal of the lecture enterprise by making use of the experiences she had acquired in the work with study groups on how people assimilate new knowledge in a group. She also had important knowledge through her many years of participation in a seminar on adult pedagogy, the so-called Vuxenpedagogiska seminariet, started in 1953 and led by Torsten Husén, professor of pedagogy at the Stockholm college. Among other subjects, the psychology of learning, group dynamics and activity pedagogy were discussed there.

The new lecture office organised courses for lecturers and also tried to broaden the subject scope and the recruitment of lecturers by actively going out to cultural institutions, university departments and various types of organisation. Ulla Poppius developed the handbook Bättre föreläsningar: praktiska råd för anordnaren in 1968. Lists were made over lecturers in various fields like for example international issues, handicap issues and environmental questions. On Ulla Poppius’ initiative, an attempt was also made to enable adult education organisations to apply for funding for activities even though they did not fulfil state funding criteria. The response was great and meant that a new type of programme started to develop, focusing on new forms of expression in theatre, dance, visual arts and music. During this period, a cooperative project with the School Board (Skolöverstyrelsen, SÖ), was started involving a programme for the hard of hearing based only on sign language.

The broadening of the lecture office’s activities led to its reorganisation in 1974 into the exchange office for cultural programmes. At the same time, the regulations for state funding were changed and various forms of cultural activity within adult education now became eligible for support, while separate support for lectures disappeared. Ulla Poppius continued as director of the new office until her retirement in 1981. She put together practical advice in the document Att ordna kulturprogram i studieförbund och föreningar that appeared in several editions in the 1980s and 1990s. In it she explained for cultural institutions which possibilities belonging to adult education were now important assignments for them, while at the same time convincing adult educationalists of the importance of their joining the bandwagon. Among successful cooperative ventures were for example projects with SIDA on information about developing countries with the help of aid workers returning home as well as various projects with Riksteatern, Rikskonserter and Riksutställningar.

The cooperation between adult education and universities was also something Ulla Poppius concerned herself with, and she had many conversations with her husband about this since he was involved in the reform in 1977 about the so-called “third assignment”, that is the assignment of colleges and universities to share their knowledge with the general public, apart from their two main tasks of higher education and research. During her time at Föreläsningsbyrån and Förmedlingsbyrån, Ulla Poppius had many assignments for Folkbildningsförbundet (now Studieförbunden), a cooperative organ for the adult education organisations with state funding. Among other things, she was responsible from 1968 for the main office and was chosen as the editor of its magazine Folkbildningsarbetet. She was also during the 1970s and at the beginning of the 1980s active on the board of the Stockholms Arbetareinstitutsförening.

After their retirement, Ulla Poppius and her husband moved to Lund. She was now given the assignment by SÖ of mapping the activities of adult education for people with mental illness. The background was that this enterprise was questioned by some in adult education, since it was considered that it was the task of healthcare to engage inhabitants confined to mental institutions. This work led to the report Arbetsfält i förändring in 1984, in which Ulla Poppius emphasised among other things the equal rights of all people to participate in adult education that took its point of departure in their own preconditions. During her time in Lund, Ulla Poppius was also engaged locally in the Fountain House movement (Sveriges Fontänhus Riksförbund).

In Lund she participated for several years as a teacher on adult education, on a course in adult pedagogy offered by the department of pedagogy at Lund University. Here she also wrote När Lundaprofessorerna höll bondföreläsningar in 1991, that was a history over the lecture office in Lund, and she took up once again her old acquaintanceship with its previous principal Anna-Brita Pontén. After her husband’s death, Ulla Poppius returned at the beginning of the 1990s to Stockholm. She joined the Föreningen för folkbildningsforskning when it was started in 1991 and participated in the editorship of the first yearbooks. Parallel to this, she continued her authorship right up into her nineties and one of the books she wrote was on her sister, Gunn Leander-Bjurström: bildväverska och textilkonstnär in 2010.

Ulla Poppius died at 97 years of age in Stockholm in 2017. She rests in Solna Cemetery. 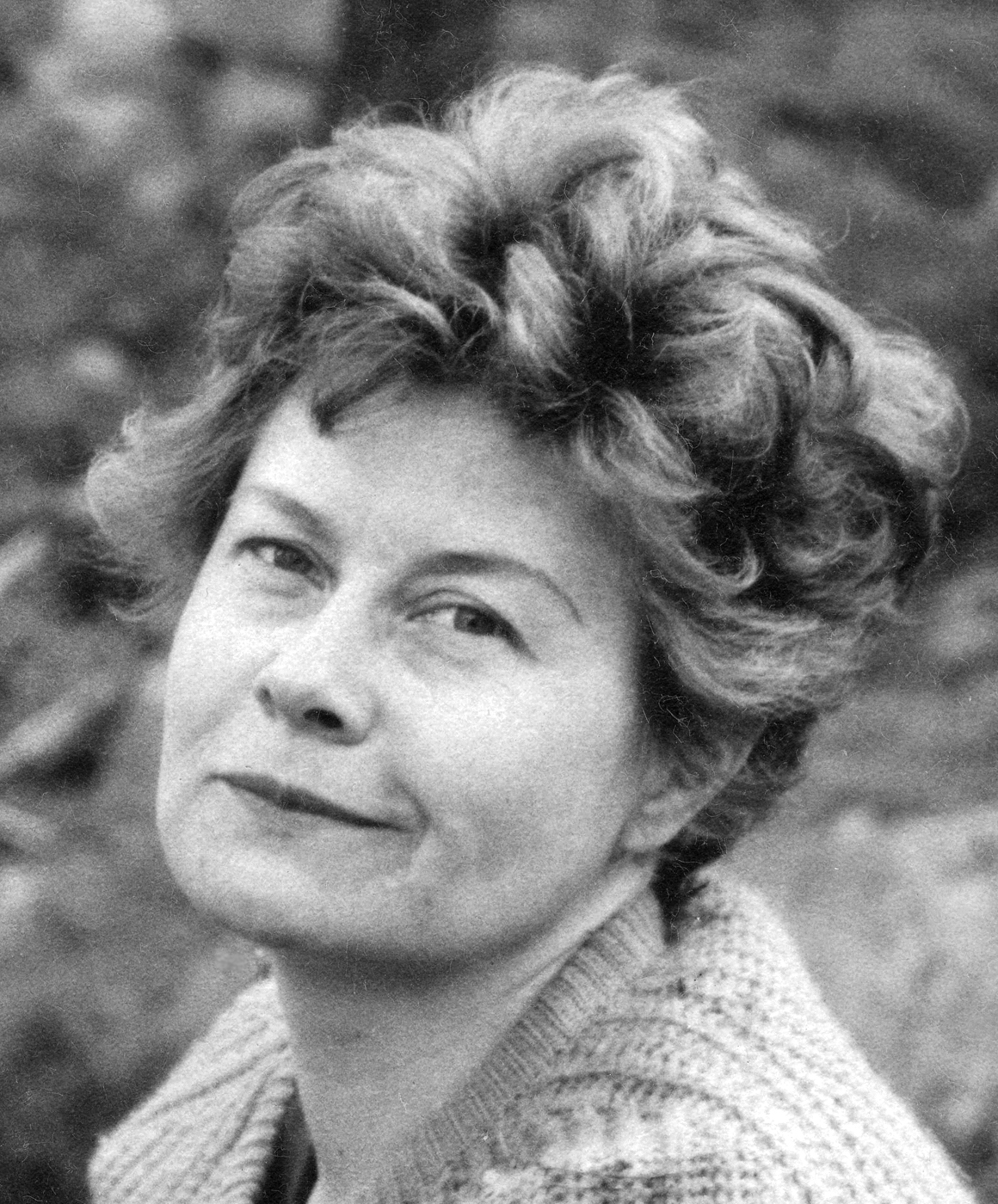