Ulrika Kullgren was an industrialist, genealogist and philanthropist, active during the 1800s.

Ulrika Kullgren was born on 3 December 1797 in Visnum parish in Värmland, the daughter of the provost Anders Hedrén and his wife Johanna Magdalena Fryxell. Ulrika Kullgren grew up with many siblings from both her father’s marriages. Her childhood was spent in a vicarage environment in Visnum and Ör in Dalsland, where her father, who was very learned and interested in pedagogy, taught his children himself.

In 1819, Ulrika Kullgren married the wholesale merchant Carl August Kullgren, who was working in Uddevalla. Her husband had been educated at the Moravian church (Unitas Fratrum) in Christiansfeld in Schleswig. He had taken over his father’s business early on and developed it into a considerable wholesale and ship-owning business. It imported groceries and exported agricultural products, especially oats to England. In 1843, he acquired the rights to quarry stone at Bohus-Malmön in the western Swedish coastal province of Bohuslän, and his son Ivar Kullgren became his father’s technical assistant. Granite from Bohuslän was delivered to many countries, among other things as cobblestones for streets, for building harbours, bridges, monumental buildings, churches, sculptures, gravestones and so on. In Sweden, the stone was used for example for bank buildings, not to mention the Carlsten Fortress on the island of Marstrand and the locks at Trollhättan.

Ulrika Kullgren thus gained time to dedicate herself to charity and her great genealogical interest. She was a driving force in the founding of the Uddevalla Industrial Institution in 1840. Its aim was to organise jobs with incomes for destitute women in Uddevalla and Bäve parishes, “to teach skills to the ignorant” and thereby “encourage zeal for work in the lazy” as well as “to some degree to inhibit beggary and the sins that come with it.” The Institution, that among other activities auctioned off donated goods to collect money for the enterprise, became a model for voluntary charity in the town. The Industrial Institution was also a ladies’ club, at which they discussed the establishment of a school for poor girls. In 1852, Fruntimmersföreningen (the Women’s Association) was started, as a kind of housekeeping school “for the training of competent housemaids”. In 1855, 80 pupils were being trained, mainly in practical subjects but also in Christianity. Leading lights in the running of the school were Ulrika Kullgren and her daughter Hedera Agrell. The Women’s Association was transformed in 1864 into the Supervision Association (Tillsynsföreningen), that was led from the start by Eva Rodhe, who developed a girls’ school with more advanced tuition.

For 20 years, until about 1868 and despite very reduced sight, Ulrika Kullgren worked at composing a family tree over the descendants of the provost Erlandus Gudmundi. The family tree was painted in acrylic and watercolours on 12 sheets of paper that together covered about one and a half metres times two and a half metres. It may be seen as a work of art in itself. The family tree and its sketches are preserved in the Archives in Gothenburg. On two occasions around 1890, attempts were made to publish this great family tree by means of subscriptions, but not enough people were interested. On the family tree, 7,569 persons altogether are named.

Ulrika Kullgren died in Uddevalla 2 January 1873. She is buried at the town’s Northern Cemetery. 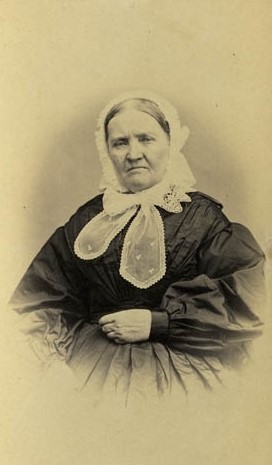