Nathalie Andersson-Meijerhelm was a philanthropist who was an active member of the Swedish revivalist movement and who founded Kristliga föreningen av unga kvinnor (KFUK) in Sweden in 1887.

Nathalie Andersson-Meijerhelm was born at Hammarsten farm in Grums parish, Värmland county, in 1864. She was the youngest child in a family comprising four daughters, one of whom died an infant. Her father, Fredrik Miles von Meijerhelm, leased the farm they lived on and he also served as a captain in the Värmland regiment. Her mother, Gustafva Fredrika Sidonia née Djurklou, was a baroness. A few years after her father’s death Nathalie Andersson-Meijerhelm, along with her mother and her sisters, moved to Karlstad. Following her mother’s death eleven years later the three surviving sisters were initially taken in by retired Captain Göran Mårten Hammarhjelm and subsequently, four years later, they were taken in by their maternal uncle, Nils Gabriel Djurklou, who lived at Sörby manor farm in Norrbyås.

Nathalie Andersson-Meijerhelm married in 1870. Her husband was Carl August Andersson. He was two years her senior and the son of a miner from Siggebohyttan in Lindesberg. The couple both adopted the hyphenated Andersson-Meijerhelm surname. Carl August had already served as the secretary of the Swedish branch of Evangeliska Alliansen for several years and he had spent time serving as a missionary in numerous European countries. He was also an illustrator and the author of works on local history and cultural history. Carl August inherited great wealth on the death of his father. The couple did a lot of travelling both together and separately. A favourite retreat was their house called “Talis kulle” which they had had built at the Siggebohyttan miner’s farm in 1884.

In 1872 the Andersson-Meijerhelm couple moved to Stockholm where Carl August owned several homes. At this point Nathalie Andersson-Meijerhelm began the charitable work on behalf of needy men and women which came to influence the rest of her life. The couple began to hold “poor receptions” in one of the slum areas of central Stockholm. The couple invited the poor to come and enjoy company and nourishment at what had once been an inn and the following year they used the same premises to set up a “soldiers’ mission”. Every other Saturday evening they would serve porridge to the local poor and on the other Saturdays they would invite 50 to 100 soldiers to have tea. Nathalie Andersson-Meijerhelm gave public talks at all of these alcohol-free gatherings. Later on the Andersson-Meijerhelm couple rented a reading room for the soldiers’ use.

The first soldiers’ home in Stockholm, known as “Härberget för husvilla män” (refuge for homeless men), opened in 1878. It was initially financed through voluntary donations obtained by subscription lists maintained at various bookshops, which also accepted donations of old clothes. Today the soldiers’ refuge is a non-profit organisation called Svenska Soldathemsförbundet, which provides support to soldiers, veterans and their dependents, largely overseas.

Nathalie Andersson-Meijerhelm was most concerned about women who found themselves in difficult situations. She was critical of the double standards which treated women who were the victims of morally questionable sexual encounters as “fallen” individuals whilst the men involved remained blameless. Female prostitutes seemed to her to be in part victims of unemployment and she referred to them as “The Wretched Poor”.

In Stockholm she noticed how ignorant the young women in her social circle were about wider society whilst poor women and serving women suffered from demanding and hard labour. Nathalie Andersson-Meijerhelm thus began to assemble young women from across the social strata to attend Bible discussions in her own home. Further to the Sunday School classes for children that she ran Nathalie Andersson-Meijerhelm also held Bible-study classes for country girls who were newly-arrived in Stockholm. She saw the need for a larger enterprise guided by Christian social mores and was inspired by her connection with Elsa Borg and the so-called Bible women at Vita Bergen. She had also heard what Hanna Ouchterlony and the ‘slum sisters’ in the Salvation Army had to say.

In 1878 she applied to join the Swedish branch of what was a British, Continental, and wider Federation seeking “an end to the regularising of prostitution and to work on behalf of shared sexual morality”. She travelled to Great Britain in order to learn more. Three years later she set up “arbetshemmet för värnlösa qvinnor” (workhouse for destitute women) at Sturegatan in Stockholm for which she served as its director. This was a refuge for women in the danger zone, for prostitutes, for both sentenced and released women. She opened a washing house and offered simpler sewing services, thereby giving the women employment. Nathalie Andersson-Meijerhelm also acted on behalf of various supportive past-times for unemployed serving girls and she set up “Förening till skydd för tjänste- och arbetssökande unga qvinnor”. At the same time she also campaigned against what she considered to be immoral literature, theatre productions, images, and clothing. The workhouse closed down in 1885 but by then Nathalie Andersson-Meijerhelm was running a Bible school.

During an earlier visit to Great Britain Nathalie Andersson-Meijerhelm had been introduced to the Blue Ribbon movement. It was not until 1885, however, that she joined the Swedish Blåbandsföreningen (later known as Sveriges Blåbandsförbund, Blue ribbon federation of Sweden). This was an oath-taking temperance movement with Christian foundations. She began to correspond with the organisation’s international leader, the temperance campaigner Frances Willard, who had founded the Woman’s Christian Temperance Union (WCTU), which in Sweden went by the name of Vita Bandet (white ribbon). These two women shared good advice on how to spread the message regarding total abstinence from alcohol and opium. In Great Britain Nathalie Andersson-Meijerhelm had been introduced to the Young Women’s Christian Association (YWCA) whose work reflected her own views. This well-established organisation, dating from 1885, their methods and their social contributions corresponded perfectly to what she was seeking and she wanted to found a similar organisation in Sweden.

Nathalie Andersson-Meijerhelm advertised a meeting to be held on 30 November 1885 in Missionförbundet’s church at Floragatan. At this meeting she summarised the British enterprise and proposed setting up a YWCA/KFUK in Sweden to which she received a hearty response: around fifty individuals of various ages joined up. On 9 December 1885 a temporary board was established for Kristliga föreningen av unga kvinnor (KFUK). The aim was “to create an organisation for the mutual support of young Christian women”. Most of the pioneering women involved in this effort were economically independent. Nathalie Andersson-Meijerhelm was elected as the organisation’s chair.

KFUK’s first reception area and meeting space was located in a building on Humlegårdsgatan, but before the year was up new premises had been leased at Brunnsgatan. In 1887 they moved again, to Norrlandsgatan 13, where a library and a reading room were installed. The enterprise was not only extremely active but also full of “happy and rewarding company”, comprising sewing-meets, Bible-hours, English classes and various singing sessions.

In 1886 additional activities for factory girls as well as meetings for servant girls were offered. During the so-called “flyttveckan” (moving week) country girls who came to the city seeking employment would be met at train stations and at piers. The organisation would advise these women about accommodation and negotiate working positions for them.

When Nathalie Andersson-Meijerhelm founded KFUK in Sweden she was forty years old and had a long history of giving talks and various activities on behalf of poor women. She continued to travel around Sweden but now her talks focused on the organisation’s sphere of action. Countless KFUK branches sprung up around the country.

The Andersson-Meijerhelm couple had spent a lot of time in Paris where Carl August had previously served as a missionary. At that time he had joined “Mission populaire évangélique de France”, also known as the McAll mission after its founder Robert Whitaker McAll. Later it became known as the “Belleville mission”. Indeed, it was probably because they were members of this organisation that the Andersson-Meijerhelm couple left Stockholm and settled permanently in Paris.

Nathalie Andersson-Meijerhelm’s Christian belief and social awareness led her to quickly set up a new project in Paris. Around the turn of the century she opened a refuge called “L’abri de la fillette” (young girls’ refuge) in one of Paris’ poor quarters. She ran this shelter until her death in 1922. Nathalie Andersson-Meijerhelm’s husband died in Paris in 1912 and was buried at the Cimetière des Lilas in a walled tomb intended for both of them. 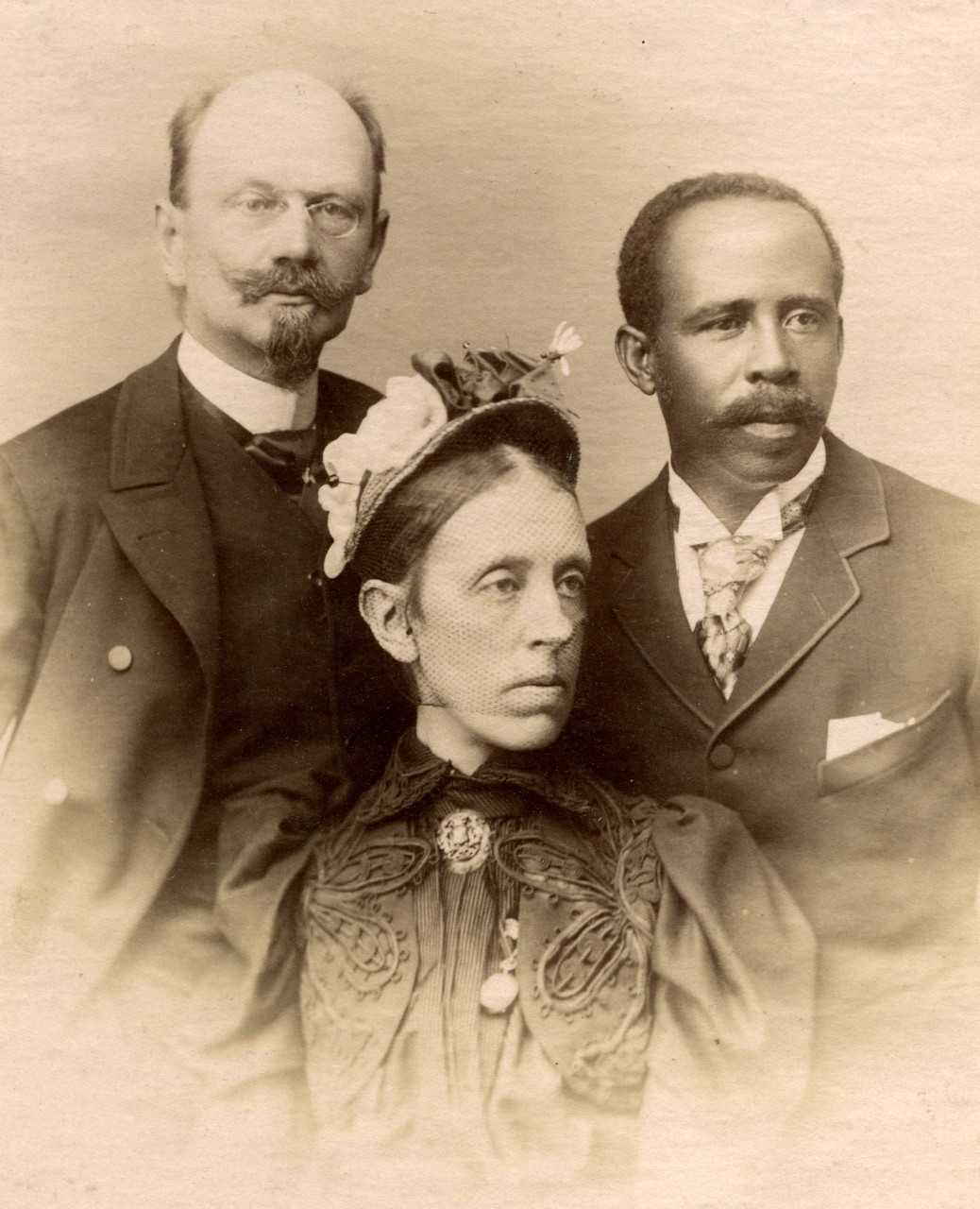