Ven Nyberg was a journalist, among other things responsible for the literature coverage in one of the major Swedish daily newspapers, Svenska Dagbladet.

Ven Nyberg was born in 1898 in Söderbärke parish in Dalarna, where her father Anders Nyberg was vicar. Her home was poor, with nine children in the family, but her father’s great interest in literature and classical education and culture gave the children a good start in life, despite the fact that both their parents died early; their mother in 1911 and their father in 1912.

The oldest brother was by then already enrolled at Uppsala University. He later became a professor of Semitic languages and a member of the Swedish Academy, but several of the younger children, like Ven Nyberg, came to foster homes in vicarages close by. Ven Nyberg realised early on that an education was important to be able to get on in life, especially as an orphan girl, and after a year or so she arrived in Stockholm. There she lived as a lodger at the home of Elisabeth Östman, the founder of Elisabeth Östman’s School for Housewives (Husmodersskola), which was accommodated in Elisabeth Östman’s house in Stockholm. Elisabeth Östman was also the editor of the kitchen calendar of the weekly paper Idun and the publisher of the cookery book Iduns kokbok in 1911. Later she became a councillor on the city council in Stockholm. The idea was probably that Ven Nyberg should only attend the six months’ course for housewives of the future, but perhaps Elisabeth Östman as a successful role model inspired her to apply to and be accepted at Anna Sandström’s school. She attended it as a non-paying student from 1914—1917. Thus she gained the final qualification that was usual for girls at that time, an examination somewhere between lower school certificate and matriculation.

With good language skills gained at school, Ven Nyberg was employed as a translator at an advertising agency and also worked as a freelancer at the daily newspaper Stockholms-Tidningen. Among other things, she wrote articles about Estonia where she had worked as a tutor in 1919—1920. The interest was great at that point for the struggle for independence in Estonia and the old Swedish districts there, after the newly drawn borders resulting from the first world war. The articles were noticed by one of the two major daily papers in Sweden, Svenska Dagbladet with the result that she started working there in 1922, with the abbreviated name Ven as her signature.

Ven Nyberg made many journeys to Rome where she visited her friend Majlen Boëthius, married to Axel Boëthius who was an archaeologist and the head of the recently set up Swedish Institute in the city. These visits contributed to her daily work as a reporter quickly being extended with interviews and reportage from the cultural field.

”A literary touche” was also the general opinion of her long-lived daily column entitled ”Today”, which Ven Nyberg introduced on Svenska Dagbladet’s page ”House and Home” in 1934, with a new signature: Vogue. Later on, several of the newspaper’s women journalists wrote for this page about the daily problems met by women in the new society that was then in the process of developing.

Ven Nyberg married the sculptor Stig Blomberg in 1932, and in 1934 their daughter Jane was born. The marriage was dissolved in 1942 and Ven Nyberg took care of her daughter as a single mother.

Ven Nyberg was also the editor of Svenska Dagbladet’s magazine section on children’s books until she was succeeded by her colleague Greta Bolin, with the signature Corinna, who in 1937 became the newspaper’s child expert on books as well as school issues and questions concerning growing up. Ven Nyberg continued instead as the editor of the newspaper’s Sunday magazine section with literary articles, until the paper rationing during the war years, when all magazine sections were discontinued. By then, the paper’s literary coverage had become her main occupation. Sometimes she was also responsible for the daily essay ”Under strecket” (below the line). Travels abroad won her attention and respect for her good and knowledgeable work as a critic. She introduced new names and foreign literary works to Swedish readers like J D Salinger, Alan Paton and Nadine Gordimer as well as pioneering Swedish authors like Stina Aronson, Sara Lidman, Dagmar Edqvist and others. As the editor of the newspaper’s culture pages, Ven Nyberg was highly appreciated for her competence and stylistic appropriateness, not least for her ability to handle the representatives of the cultural Sweden of her day in their professional practice. She travelled round the country visiting various women’s clubs and talking about literature and the work of a reviewer.

In 1951, as the first woman ever, she was made chief editor of the literature section at Svenska Dagbladet when she succeeded Karl Ragnar Gierow, who was later to be elected member and permanent secretary of the Swedish Academy.

Early on during her time at Svenska Dagbladet, Ven Nyberg had already been allowed to take responsibility for the section featuring serials, for a long time an important part of the culture pages of daily newspapers. She continued with this responsibility right up until 1974 – despite having formally retired in 1966.

Ven Nyberg died in 1986 at the Serafen nursing home in Stockholm. Her ashes rest in the columbarium in the Gustaf Vasa Church in Stockholm. 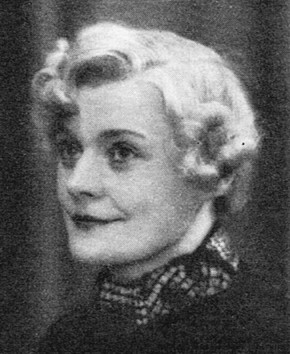