Vera Nilsson was one of the earliest and most prominent Swedish expressionists. She is best known for her paintings of children and of Öland.

Vera Nilsson was born in Jönköping in 1888. She was the youngest of four children born to Karl Nilsson, a bailiff, and Ada Sjöberg. She was brought up in an affluent home which was characteristically neat and tidy as well as frugal. Her father believed in the importance of education, particularly with regard to his daughters, all of whom eventually became qualified teachers. It was his decision that Vera Nilsson should become a drawing instructor and thus she received private drawing lessons whilst still at school. Thanks to these lessons she gained admittance in 1906 to the advanced section of the drawing instructors’ training programme at Tekniska skolan (the technical school) in Stockholm. Whilst undertaking her studies at the school she decided to become an artist and wanted to attend the Konstnärsförbundet (artists’ association) school instead, but her father rejected these wishes, declaring that she had to complete the educational course she had begun.

Upon finishing her studies in Stockholm Vera Nilsson returned to her home town. Her father relented with regard to her career choice and she gained the opportunity to study with Carl Wilhelmson at the Valand art school in Gothenburg during the winter of 1909–1910. Her fellow pupils at the school included Maj Bring and Mollie Faustman.

Vera Nilsson carried on her artistic development in Paris in 1911. There she studied with the cubist Henri Le Fauconnier at the Académie de la Palette and also visited Russian schools, such as Marie Vassilieff’s Académie Vassilieff. Many years later Vera Nilsson said on cubism: “Yes, it is a matter of construction, which actually stays with you throughout your life”. In 1912 Vera Nilsson was exposed to Vincent van Gogh’s expressive artwork at the international Sonderbund exhibition in Cologne and this had a defining impact on her own art.

Vera Nilsson was in Borgholm at the time of the outbreak of the First World War. She spent the ensuing winter in Stockholm, during which time she painted the so-called “Gubbhuset” at Glasbruksgatan. Later this served as a recurring theme of her art.

Given that Copenhagen benefited from better access to food many Scandinavian artists and authors spent the war years in that city. Copenhagen also provided better opportunities to see international art. Vera Nilsson lived in the Danish capital from 1916–1919 although she spent her summers on Öland. She painted the city streets, such as “Allégade”, and parks as well as portraits of individuals, including Astrid Holm, her Danish friend and artist who ran an art school which Vera Nilsson and other Swedish artists attended.

During the 1910s Vera Nilsson painted in the cubist style, using heavy expressive elements. Her debut exhibition, along with work by Mollie Faustman, was held at the Ovenlyssal in Copenhagen in 1917. A Danish art critic noted how naturally Vera Nilsson expressed her feelings in her paintings and that the subjects of her paintings were densely concentrated. She was an original and “completely lacked the typically reproductive elements of women’s art”. Vera Nilsson thus contravened the usual understanding of women’s art. At the De Unga exhibition housed at Liljevalch’s, which served as her Swedish debut, it was mainly the bold colours and shapes of her Öland depictions which attracted attention. She received overwhelmingly positive reviews and one significant art critic considered her to be the only truly consistent expressionist on display, both in terms of flair and technique.

Vera Nilsson spent most of the summers between 1914 and 1978 on Öland. In addition to Borgholm, she also lived in Södra Sandby, Gillberg, and Räpplinge by. The landscape she lived in had been familiar to her since her earliest years and this played an important role in her paintings. The majority of her Öland paintings were produced during a thirty-year period, spanning the dark, erupting 1917 work called Terräng. Öland through the richly colourful Ölandsby, from 1932, to the light, warm, and translucent paintings such as the 1946 Högsommar.

In the autumn of 1919 Vera Nilsson travelled to Spain. The El Greco paintings in the churches of Toledo made a strong impression on her. The sight of some poor girls dancing on the streets of Malaga surrounded by uninterested people moved her deeply. She produced several versions of her painting Gata i Málaga. One of them, in reddish-violet hues, has the central dancing female figure wearing an orange-red dress, a colour that she began to use regularly. These paintings revealed Vera Nilsson’s empathy for the vulnerable and the weak of society. She was more explicitly political in her monumental anti-war painting entitled Penning contra liv, painted in 1938 in protest against the Spanish Civil War.

Whilst Vera Nilsson was in Paris she gave birth to her daughter Catharina – known as Ginga – in 1922. Catharina served a focal theme in her mother’s work from her early years right up to her confirmation. In 1927 Vera Nilsson received the Ester Lindahl stipend, enabling her and her daughter to travel to Italy together. Two of Vera Nilsson’s best known works featuring Ginga were created in Italy, namely På terrassen and Såpbubblor in which certain influences from the new objectivity of the 1920s are apparent. Vera Nilsson herself found them overworked.

Vera Nilsson’s paintings of children, mainly Ginga, became well-known and contested. To many her depictions of children were ugly as she did not present the usual idealised image of children with which the public were familiar. The children in her paintings are extremely focused on a given activity, as in Det första steget or in Barn med hyacinth. Vera Nilsson’s early paintings of her daughter often used the colours red and green.

It was not until Vera Nilsson was in her 40s that she had her first permanent home in an old-fashioned four-room flat in Söder, Stockholm. There she was able to combine working with looking after her daughter and she produced several of her well-known paintings. “Gubbhuset” was a regular theme as was the frequent view-from-a-window, providing both an inside and an outside perspective. She formed an inner circle of friends who were female colleagues, several of whom were also single mothers.

During the 1930s Vera Nilsson intensified her colour scheme, believing this to be her colourist breakthrough period. She spent two summers in Värmland, painting landscapes and people in a more realistic manner. In the early 1940s she spent three summers in the fishing village of Bohuslän. There Vera Nilsson, who was fascinated by the fishermen’s work and environment, produced a long series of paintings.

A few years before she retired Vera Nilsson was given her first formal commission. This was in 1951 and the commission was to produce a fresco for Västertorp school in Stockholm portraying the conquest of evil by good in the classical tale Sagan om solen och stormen. A few years later she produced the large fresco entitled Händer for Djurgårdskolan in Eskilstuna in tribute to the working and creative people in the world. Vera Nilsson was an early advocate of the inclusion of art in the planned underground in Stockholm. She was commissioned to produce art for the T-Centralen station and in 1957 she created the mosaic pillar called Det Klara som trots allt inte försvinner. During the 1966–1967 period Vera Nilsson worked on the altarpiece called De tre vise männen which was created out of felled and painted wood for Nacksta church in Sundsvall. Once again Vera Nilsson adopted the global perspective in her altarpiece, as she had done in Händer. The three men with differently coloured faces in red, yellow, and blue represented different parts of the world.

Vera Nilsson’s interest in the wider world meant that she travelled a lot. In 1933 she visited the Soviet Union along with some other artist friends. A few years later she went on a painting trip to Estonia with Maja Braathen. In 1960 she sailed the Mediterranean sea on a freight ship and one of the ports they called in at was Beirut, leading to this port becoming another one of her motifs.

Vera Nilsson often visited France. After the Second World War she spent time in Paris and was put in touch with Senegalese students through the sculptor Liss Eriksson. Some of them became her models and aroused her interest in the Négritude movement. As a result she went to Senegal in 1949, spending four months there drawing everyday life in the country and painting in pastels. In 1952 she painted Minne från Afrika and in 1959 she produced two abstract paintings entitled Négritude. Twenty years later she travelled to Martinique and painted several portraits there.

Vera Nilsson also became involved in the peace movement during her time in Paris. She sold Citoyen du monde on the streets and painted people including the authors Albert Camus and Ana Seghers in her Fredsmöte, Paris. She was worried about the threat of nuclear war and during the 1960s she produced several paintings depicting a devastated world, entitled I förvillelsens tid. One of these paintings, which was subtitled Tröst, provided a modicum of hope. In 1979 she created Fredskortet depicting women with their arms outstretched and shouting: “Women stop the arms race”. Cards bearing this image were sold on behalf of the Women’s International League for Peace and Freedom and this was the last artwork Vera Nilsson created.

Vera Nilsson displayed her art in many group exhibitions, including with Falangen, Unionen and Färg och Form, both in Sweden and abroad. She only held four solo exhibitions. She felt that these solo exhibits drained too much energy from her creative flow. Erik Blomberg, when writing about Vera Nilsson’s 1948 exhibition for Konstrevy, stated that she was the one Swedish artist who had given the most depth to the expression “our time”. In 1975 Vera Nilsson held a major retrospective exhibition at Konstakademien (the academy of art) in Stockholm. This was a success and toured elsewhere in Sweden, Norway, and Denmark.

Vera Nilsson was awarded the Prins Eugen medal in 1948. She was elected a member of Akademien för de fria konsterna (the royal Swedish academy of fine arts) in 1954 and as such was the first woman to become a member during the twentieth-century. She campaigned on behalf of the admission of women in to the academy and proposed Siri Derkert, amongst others, as suitable candidates. In 1964 Vera Nilsson rejected the offer of a state-funded artist’s salary or guaranteed income as she believed that the focus should lie on the grassroots giving artists the opportunity to work in proper studios and workshops.

Vera Nilsson died in Stockholm in 1979. She is buried in Jönköping. 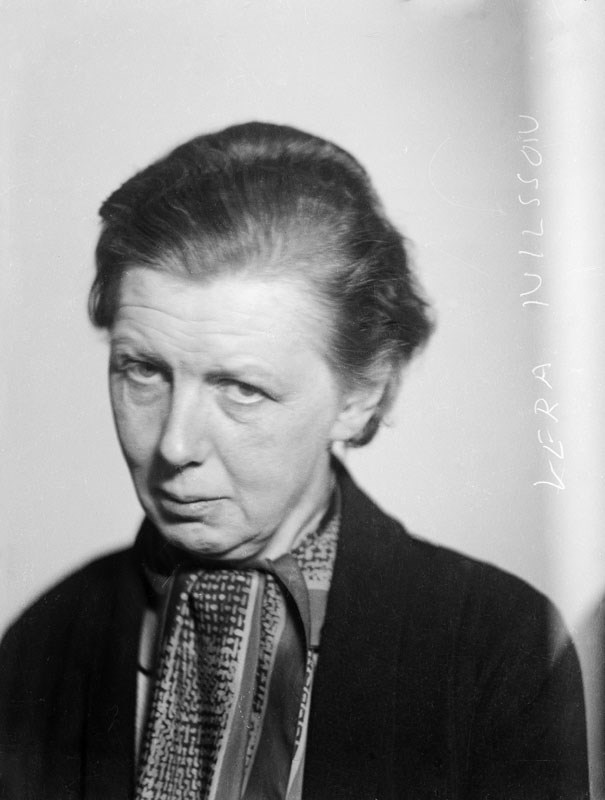