Vera Nordin was an argumentative artist, journalist and peace activist, who fought for justice, equality, and the poor. She spent six years working as the editor of the journal Hertha.

Vera Nordin was born in Stockholm in 1920. Her father, Hilding Källblom, was a fur trader who went by the title of ‘director’. Her mother was named Gurli Källblom. Vera Nordin’s brother, Klas Källblom, was seven years her senior and he eventually followed in his father’s footsteps, becoming a furrier and managing director of Källblom Pälsvaruaffär.

Vera Nordin was educated at Brummerska skolan, a private girls’ school, and later at the private Lyceum school for girls. In 1947 she gained her Bachelor’s degree at Stockholm College and the following year she began attending Otte Sköld’s school of painting. She primarily saw herself as a painter but she was multi-talented and also trained in drawing and graphic arts. She taught herself the latter whilst a special student under Harald Sallberg’s guidance.

By 1940 Vera Nordin was working as editor of Utlandssvenskarnas Tidskrift and had already worked as a journalist for Bergslagsposten newspaper for some time. In 1946 she married Olle Nordin, with whom she had two daughters named Lena and Monique. After having lived for a time in Hagfors she moved back to Stockholm in 1954. She had grown tired of the bourgeois lifestyle and wanted to begin painting and writing poetry again and so she travelled to Provence and Bornholm.

Initially Vera Nording painted nature images, often landscapes, the interiors of ironworks, and expressive portraits. She subsequently sought to simplify her use of shapes and colours. She exhibited her work in several group exhibits throughout the 1950s and in 1954 she published a poetry collection entitled Kär lek which she illustrated with her own graphic artwork. Her publisher, Hans Rabén, informed her that a Swiss illustrator was holding a party around the time her book was being released and she decided to attend the gathering.

The Swiss illustrator in question was Hans Arnold. Lotten Strömstedt’s biography of Hans Arnold recounts how the small dark-haired Vera Nordin, using a long silver cigarette-holder and dressed in a black velvet skirt with a green silk scarf, immediately made an impression on her host.

It was not long before Vera Nordin, and her now four- and five-year-old daughters, moved in with Hans Arnold. The couple then travelled to Lucerne in order to get married but became embroiled in a dispute with Hans Arnold’s Catholic parents. They were upset that their future daughter-in-law was not only previously married with daughters but was also an atheist. Nevertheless, the wedding went ahead and Vera Nordin’s daughters served as bridesmaids.

Vera Nordin soon fell pregnant. Due to complications she was bed-bound for the duration of the final months of her pregnancy. In April 1956 she gave birth to twins who were named Björn and Ylva. The whole family then moved into the Hässelby family hotel, which formed part of a collective that included a school and preschool, common recreational areas, a sauna, as well as a large restaurant with a conservatory. Vera Nordin championed this type of living arrangement for workers with young children and considered herself lucky to be free of the need to go grocery shopping and prepare food, and enjoyed being able to invite guests to the function suite.

Hans Arnold benefited from regular employment whilst Vera Nordin spent her time writing and promoting her poetry as well as working for a publication called Femina, providing travelogues, profiles of individuals, and writing on women’s issues and matters of equal rights. Her first solo exhibition, entitled Ansikten, was held in 1960 at Lilla Paviljongen. Later she held both solo and joint exhibitions with her husband in Stockholm, Mariestad, and Luleå. She also wrote plays, such as Dansa min docka, which was performed at Malmö stadsteater (city theatre) in 1964. She further produced scripts and directed shorts for television. The most prominent of these was Pianolektionen which was shown at the London Film Festival and was the first Swedish film to be awarded first prize at the shorts festival in Oberhausen, International Kurzfilmtage Oberhausen, in 1966.

Vera Nordin’s great breadth in both her visual creativity as well as her written output found further expression when she wrote the scripts for her husband’s animated children’s film series called Matulda och Megasen. This was shown in black and white on television in 1967 and was released in book format that same year. A colour full-length film about the little airborne creatures was released in 1975.

During the 1976-1982 period Vera Nordin served as the editor of Hertha, the organ of Fredrika-Bremer-Förbundet, thereby proving her extensive and continuous engagement on behalf of matters of justice and freedom, on behalf of the environment, and against nuclear power. She also involved herself in housing matters, fought against the dominance of older males within the business world, the mass media, the church, and politics. She campaigned for sexual equality and a fair gender distribution of responsibilities in all decisions of societal significance. When she was asked how she could live with “such a male pig as Hans Arnold” she replied that “she admired Hans but loathed his old-fashioned view of women”.

For many years, right up until the early 1990s, Vera Nordin regularly wrote Stockholm-based art and theatre columns for about twenty different rural newspapers. For a time she was an active member of the Social Democratic party but later joined the Stockholm party. Vera Nordin was brave, stood up for her own beliefs, and not infrequently found herself at odds with other people. Matters which she felt were wrong left her angry, infuriated, and she wrote: “Young people, women and right-thinking men – unite in your anger, fight for justice and equality and in caring for the earth and future generations”.

Towards the end of her life Vera Nordin suffered from severe illness and for several years she was “completely withdrawn from the world”. She died the night after her 87th birthday in 2007 and her remains lie in the memorial garden at the Woodland Cemetery in Stockholm. 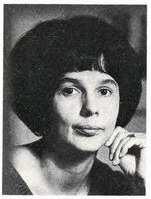