Vera von Kraemer was a multi-faceted publicist and an author in the early twentieth century.

Vera von Kraemer was born in 1878 in Visby. She spent her early childhood years in Visby and in Småland. When she was of age to attend school she moved to Stockholm, along with her brother and mother Anna Jäderin (later married as Anna Branting). Her mother divorced from the father of her children, Lieutenant Gustaf von Kraemer, once they had moved. Anna Jäderin then remarried to Hjalmar Branting, who was a leading member of the Swedish Social Democratic Party. Vera von Kraemer’s home environment from the time she started school can thus be described as that of a family surrounded by the intellectual and political elite of the era. Vera von Kraemer described her family life in her writing, for instance in Brantings på Norrtullsgatan, 1939. Her first marriage, to Boo Hjärne, only lasted a few years and ended unhappily due to financial difficulties. In 1905, after having divorced Hjärne, Vera von Kraemer moved in with Hugo Lindblad, whom she had met through her work as a journalist. They did not marry until 1924 when they decided to foster a girl called Greta-Lisa, whom they later adopted.

In 1897 Vera von Kraemer made her debut as a translator with translations of a novel by Henryk Scenkiewicz which were published as a series in Social-Demokraten. The following year the translations were published as a book entitled Från Neros dagar (Quo Vadis). As a newly wed she continued to work as a journalist for the daily press: initially at Svenska Dagbladet, 1900-1905, then once she had divorced and moved in with her new partner at Social-Demokraten until 1913, and finally at Stockholms-Tidningen, 1913-1918. During the period of 1905-1912 she also worked as the editor of the weekly journal Mitt hem, which was later renamed Vi och vårt. From 1918 to 1919 Vera von Kraemer was also the editor of the women’s suffrage movement’s journal. By 1918 she had stopped working as a journalist for the daily press, which involved irregular day, night, evening and weekend shifts. She then began to work at Svenska biografbyrån, which soon became Svensk Filmindustri, as one of the first Swedish film reviewers, and she remained there until 1928. Once she left that job she carried on as a freelance reviewer for the rest of her days. She had been active as a freelance writer, including as a reviewer and translator, since her early years. She also continued to work with the daily press in Stockholm, for instance as a serials editor. Vera von Kraemer regularly wrote for journals such as Idun and Husmodern. She also wrote an advice column in Husmodern for a few years, called “Svar omgående”, in which her final contribution was published just a few weeks short of her death.

Vera von Kraemer’s output as an author for various publishing houses comprises both translations and her own work in the form of novels, children’s books, and guidebooks of various types. She translated approximately 50 novels and children’s books, often from English and Norwegian. On top of that she wrote around 20 books herself, including Gud som haver barnen kär, 1915, and Brantings på Norrtullsgatan, 1939, several contemporary novels such as Advokatens umgänge, 1911, children’s books the likes of Båda barna Boman, 1925, and guidebooks on various skills from leatherwork to lace. In 1913 Vera von Kraemer travelled to Japan and then came home by train through Russia. This resulted in the book En resa and a new-found interest in Japanese handicrafts, as became evident in her articles for both the daily press and weekly journals. She also wrote a few expository books such as Oss anförtrodda, 1931, on parenthood, I nöd och lust, 1932, on living together with someone, and Vägen går vidare, 1934, on getting older. 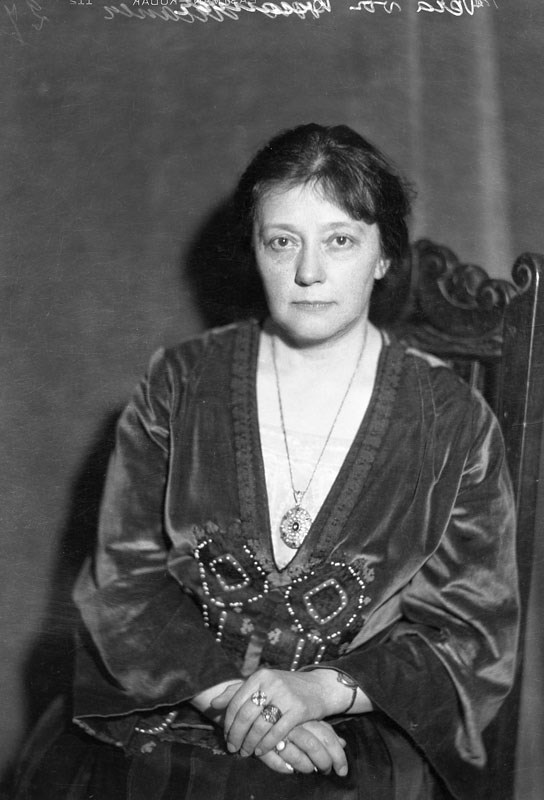