Vivi Horn was an author who was best-known for her significant biographical works.

Vivi Horn was born in 1877 and grew up within a noble military family. She was educated at a girls’ school and then remained at home until 1903 when she married Lieutenant-Colonel Christer Horn af Rantzien. During the 1910s Vivi Horn published three fairy-tale collections which were inspired both by her maternal grandmother’s story-telling and by H.C. Andersen, her favourite author. Her charming fairy-tales told of angels and elves. In 1914 she also published, under a pseudonym, a novel entitled Skilsmässan which broke from the idyllic norm.

Vivi Horn’s interest in biographies was first awoken by oral information she gained from her mother, Anna Knös. Her mother belonged to a cultural family who protected the memory of Thekla Knös, a famous member of the Uppsala romantics. Vivi Horn’s successful breakthrough came through her 1921 work De små Knösarna. Ett romantiskt uppsalahem. The book, which provided a complete portrayal of Thekla Knös’ remarkable life, was dedicated to her mother.

Vivi Horn paid tribute to her father’s military background in her 1928 work Herrarna till Runsa. Några drag ur släkten Ankarcronas historia. Here Vivi Horn place her father’s family in amongst the fiery and controversial figures within the kingdom’s leading circles. Her father was also a good story-teller. De sista Sturarne, from 1931, was yet another biographical study which dealt with well-known Swedish families. This work was based on a correspondence collection which Vivi Horn had found at her father’s property of Runsa in Upplands Väsby.

However it tended to be the romantic developments of people’s lives which mainly captured Vivi Horn’s attention. With her light and elegant prose she portrayed people in such a way as to make them colourful and impressive, despite whichever personal setbacks they had experienced. Herrgårdsliv och uppsalaromantik i början av 1800-talet, from 1935, became almost a sequel to De små Knösarna. These portrayals often relied on archival material from within the family circle. Vivi Horn’s genre did not include a rigorous evaluation of her source base.

One of Vivi Horn’s major works of this type was Den sturske Montgomery. Kvinnotjusare, kungagunstling, statsfånge, from 1938, which was a multi-faceted portrayal of the captivating life-story of Malla Silfverstolpe’s father, Robert Montgomery. På sångens vingar, which is Vivi Horn’s 1940 portrait of Jenny Lind, and En fjärilslek, from 1942, on Emilie Högqvist’s life-history seem to the modern eye to be highly romanticised representations. It is possible that Vivi Horn had become stuck in a genre which had already become considered slightly passé during the war years. Her book, Prins Gustaf, from 1946, was another hagiographic-type of work and like many others of that sort was published by Wahlström & Widstrand, who served as Vivi Horn’s publisher at that time.

Vivi Horn wrote a light-hearted account of her own life in 1943 called Du lyckliga tid and in the following year she published Resan ut i livet. The cover for the former included the Runsa estate whilst the latter bore an illustration depicting London. Both of the books included photographs of the author. As before, Vivi Horn focused on her family history and the upper echelons of society within which it moved.

Vivi Horn’s last major work dates from 1950 and is entitled Flickan från Strömstad. It concerns Emilie Flygare-Carlén and the story of her life. Her final book was Roslagstull, from 1958, in which she collated a few memories of that part of Stockholm, where she had lived since 1930. She researched her surroundings, both its buildings and its personalities, with great curiosity. Vivi Horn must have been blessed with a remarkable social talent. This is particularly apparent in her portrayal of her neighbour Carl Eldh, which is a fine example of Vivi Horn’s skill for empathetic writing.

During the 1940s and 1950s Vivi Horn also supplied articles for the journal Svenska hem i ord och bilder. These mainly comprised ‘at home with’ reports on the upper echelons of Stockholm society. 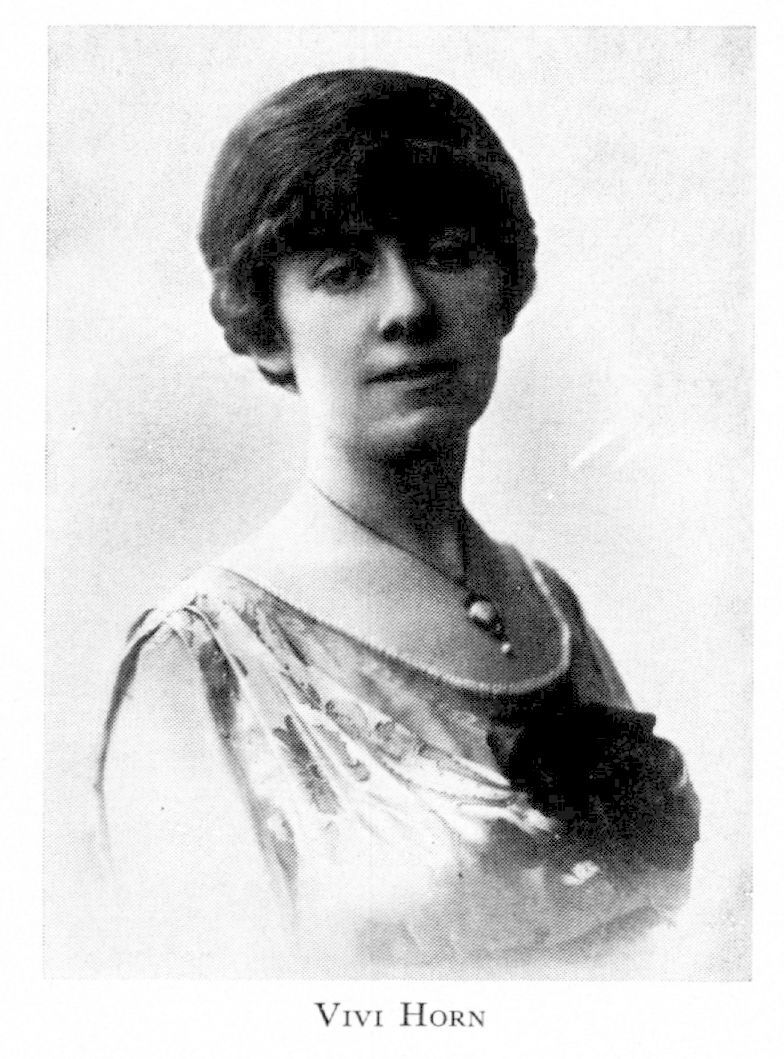