Wendela Hebbe was a well-known author, editor, and journalist of the mid-1800s. She was the first woman in Sweden to be employed on a newspaper editorial board and she was responsible for introducing social welfare journalism into Sweden.

Wendela Hebbe was born in Jönköping in 1808. She was the first of three girls born to her parents. An older brother died when he was seven years old. She grew up in Nässjö and Norra Sandsjö in Småland. Her father, Samuel Åstand was a local pastor, and later dean. He home-schooled his daughters – Wendela, Petronella (Pella), and Malin – himself, naming them ‘Frågvis’ (the inquisitive one), ‘Näsvis’ (the cheeky one), and ‘Envis’ (the headstrong one). Despite the scepticism of his peers he did not shy away from teaching them the natural sciences as well. Singing, music, and poetry obviously formed part of the family sphere. The parish bishop Esaias Tegnér particularly appreciated the Åstrand girls’ singing talents, and he also developed a particularly keen eye for the eldest daughter over the course of his many visits.

Wendela Hebbe’s father died when she was 19 years old. The family moved back to Jönköping where Wendela Hebbe became a firm friend of Pauline Cronhielm, a member of the nobility, with whom she shared a passion for poetry. Through Pauline she got to know one of Tegnér’s former students, Samuel Leijonhufvud. He was President of Göta Court of Appeal, where a certain Clemens Hebbe was an observer. Clemens and Wendela Hebbe got married in the spring of 1832 and settled at the Näsbyholm estate near Värnamo. They had three daughters in quick succession: Fanny, Thecla, and Signe Hebbe.

One of Wendela Hebbe’s small pleasures – while she was raising three toddlers and her husband was often away travelling and finances were tight – was her friendship with Tegnér, her youthhood idol. He would send her book parcels and encouraged her to deepen her knowledge of German. However, the 26-year older ‘king of Parnassus’ also exhibited an escalating romantic interest in her which bordered on blackmail, as apparent in his letters: “The fate of my heart – perhaps to some degree also that of Swedish song – now lies in your hands; shall it remain there?”.

In the spring of 1839 Clemens Hebbe’s convoluted business affairs led to bankruptcy. Clemens Hebbe was charged with financial irregularity and so he fled, initially to Britain where he wrote for the London press. He then moved onto America, where, after a few years working as a journalist and translator, he became an itinerant diplomat. Näsbyholm was sold at auction and Wendela Hebbe, now a 32-year old mother of three, was forced to earn her own living. Tegnér lent her money and books and encouraged her to take up sewing, but she instead returned to Jönköping and set up a private school giving lessons in music, drawing and languages. She spent her free time writing a novel, called Arabella, which belonged to the romantic-sentimental genre. When she dared to approach Fredrika Bremer for an opinion the latter declared that she was far too “enamoured of reality” to be able to pass comment on “the product of fantasy”.

In the early summer of 1840 Wendela Hebbe took a trip to the capital city which came to have a definitive impact on her future. Through Tegnér she obtained a ticket to the Swedish Academy’s commemoration day. She took singing lessons with Giovanni Belletti – who often sang opposite Jenny Lind – and she socialised with her friends the poet Julia Nyberg (Euphrosyne and the author and polemicist Ellen Key. She met the all-round research and teaching assistant Olof Hyltén-Cavallius at the Kungliga Bibliotek (royal library), and he took it upon himself to find a publisher for her manuscript. Women were not yet permitted to do this themselves at that time. Lars Johan Hierta’s publishing house accepted the manuscript. Following the publication of Arabella in the later 1840s Wendela Hebbe sent further material, via the same go-between, to Hierta’s newspaper Aftonbladet.

In the spring of 1841 Wendela Hebbe travelled to Stockholm to meet Hierta in person, and this led to a probationary job. Wendela met some of the celebrities of her era, such as Carl Jonas Love Almqvist, Jenny Lind, Sophie von Knorring, and Orvar Odd, the feared and harsh critic Oskar Patrik Sturzen-Becker, who soon became her colleague at Aftonbladet. In the autumn she and her sister Petronella and her three daughters moved to Stockholm. She settled in Gamla Stan (the old town) where many other literary people already lived, close to Aftonbladet’s editorial offices. Her annual wage was a comfortable 1000 riksdaler which she was paid for translating Hierta’s literary pamphlet series Läse-bibliothek af den nyaste utländska litteraturen i svensk öfversättning and she also wrote, translated, and edited material for Aftonbladet. She was also responsible for the newspaper’s serials sections and published a fair amount of her own work. She wrote theatre reviews and some literary reviews. She also provided translations for the theatres.

It is hard to provide an overview of everything that Wendela Hebbe wrote for Aftonbladet during what was almost a decade-long employment at the newspaper offices. A few of the entries actually bear her signatures of W., Liana, and Wendela, but several articles at this time were published anonymously. It was not unusual to have a variety of pseudonyms as this served both as a protective device and as a trademark. It was not deemed suitable to be writing for money, particularly not for women, and particularly not for Aftonbladet. Tegnér, who had been engaged in a dispute with that paper for several years, must have been perturbed at Wendela Hebbe’s choice of employer.

Wendela Hebbe became sucked into the liberal currents of her era and towards the end of the 1840s and the early 1850s she became involved in documenting poverty and undertook ‘active journalism’ on social welfare reporting from within the poor quarter of the capital city. This led to fund-raising and aid movements. Articles such as ‘Arbetarkarlens hustru’, ‘Krigarens änka’, ‘En fattig kvinna’, and ‘En fattig familj’ served as direct appeals to the readers’ benevolence and received contributions were declared in the paper. Wendela Hebbe’s reports offered a completely new way of serving up philanthropy at that time in the form of popular serials.

Wendela Hebbe translated several of the current best-selling authors such as Charles Dickens, Edward Lytton Bulwer, and Eugène Sue for the Läsebibliotek. Wendela Hebbe wrote to Erik Gustaf Geijer in the summer of 1845 telling him that she had been forced to live off of “common literature, the most sterile and thus the most heavily produced type, which forms the world of the translator …”. Translating was a demanding task and tended to be left for women who were often skilled at modern languages and were forced to accept low rates of pay.

Wendela Hebbe never became the fourth wheel to novelists like Fredrika Bremer, Sophie von Knorring or Emilie Flygare-Carlén. However, one of her novels has stood the test of time, namely the parsonage-based Brudarne. Through C.A. Wetterbergh’s (Onkel Adam) efforts it was published in 1846 as part of the pamphlet series entitled Originalbibliotek för den sköna litteraturen in Norrköping. In it Wendela Hebbe moved on from the romantic genre of her debut novel to a more realistic depiction of rural life and the disillusion of a young woman when her fiancé returns from the capital city a changed man. Brudarne was selected by Eva von Zweigbergk as “the first Swedish girls’ book”, whilst Fredrik Böök has described it as “Wendela Hebbe’s masterpiece of a novel”.

Navigating the patriarchal cultural scene of Stockholm, in which women in public were almost viewed as prostitutes, must have been draining. Wendela Hebbe was not just multi-talented and driven, she was renowned for her beauty and it encouraged many suitors. Tegnér wrote in a poem about “the fire of your dark eyes” whilst Almqvist enthused over “Wendela’s dark locks” and Lars Johan Hierta fell head over heels for her. The latter’s attentions generated a response. Hierta, who had five daughters with his wife Wilhelmina as well as an illegitimate daughter whom his wife had already taken in, spent the rest of his life living with both his original family and with Wendela Hebbe’s family. In the winter of 1852 Wendela Hebbe travelled to France and, aged 43, gave birth to a son, fathered by Hierta. Edvard, following a few years abroad returned home as a ‘foster child’ and had to call his mother ‘aunt’ and his sisters ‘cousins’. Clemens Hebbe only officially divorced Wendela in 1864 as he wanted to remarry.

In her later years Wendela Hebbe fought both against illness and financial troubles. She suffered from rheumatism and eventually became completely paralysed. Her professional life then entered a creative ballad and fairy-tale period. Her first collection of fairy-tales, entitled I skogen, was published in 1871 and was released in several editions. It was also published in Norway. Under hänggranarne and Bland trollen were published in 1877. Wendela Hebbe spent a significant aspect of her senior years supporting her youngest daughter Signes’ career as an opera singer across Europe.

Following a long and largely active life Wendela Hebbe died in Stockholm in 1899. She is buried at the Norra cemetery in Solna. 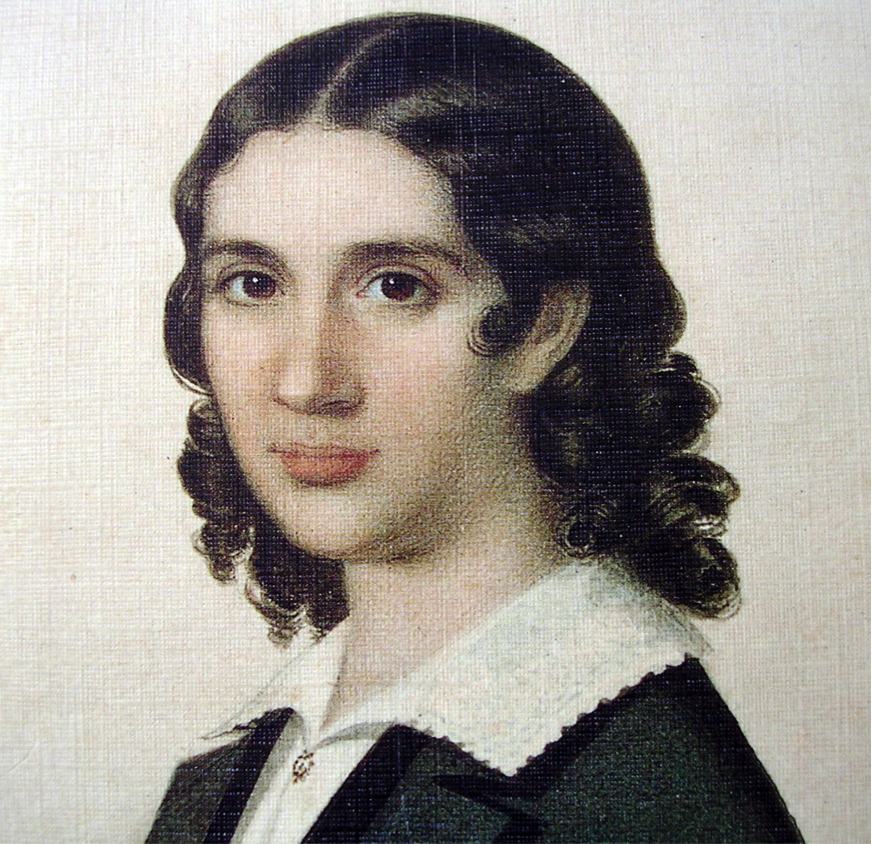