Zaida Hagman was a colourful activist within the peace- and women’s movements who was a driving force within the extra-parliamentary sphere in Gothenburg from the 1960s until she passed away.

Zaida Hagman was born into a small working-class home in Lundby, Gothenburg, in 1931. Her mother, Göta Olofsson (née Tuomisto), had worked as a kitchen assistant, a maid, and at textile factories in her youth and later on she worked from home. Her father, Einar Olofsson, was a sheet-metal worker at the Arendal docks. Both of her parents were active members of Sveriges kommunistiska parti (SKP, Swedish Communist Party), known from 1967 onwards as Vänsterpartiet kommunisterna (VPK). In 1977 VKP underwent a schism and her parents’ political allegiance shifted to Arbetarpartiet kommunisterna (APK, workers’ communist party).

Zaida Hagman’s mother, Göta, was a member of the Blåbus theatre company. This gave Zaida Hagman early exposure to cultural experiences, namely theatre performances, music, singing, dancing, and parties. Zaida Hagman was a dedicated reader in her youth and could always be found with her nose in one book or another. Her mother and some of her sisters belonged to the Bjurslätt division of Svenska kvinnors vänsterförbund (SKV, Swedish women’s left-wing association). SKV was, and still is, a feminist and pacifist association which seeks to protect earth’s fragile nature and which is based on solidarity with women across the globe. It was in this context that Zaida Hagman eventually found a release for her major social activism.

After completing seven years at Lindholmsskolan Zaida Hagman began to work at Götaverken shipping company offices. She then found employment at a copying office in central Gothenburg and it was there she suffered a work injury which would plague her for the rest of her life.

Zaida Hagman began her social activism in her youth. She joined Verdandi, the workers’ movement sobriety organisation, of which her future husband, Allan Hagman, was also a member. He was a docker who was active within the Hamnarbetareförbundet trade union, section 4 in Gothenburg. The couple married in 1950, when Zaida Hagman was 19 years old. That same year their first child was born. Following the birth of her fifth child she spent the next fifteen years performing the unpaid work of a housewife. When her youngest was five years old she began to work part-time at the Arendal docks cafeteria. She trained as a nursing aide and later as a full nurse, having obtained funding from Sahlgrenska hospital which needed qualified staff. She gained a permanent job at Sahlgrenska hospital at the cardiology department and joined the trade union Svenska kommunalarbetarförbundet (Kommunal). Later in her professional career, whilst working as an assistant nurse at Svartedalen sjukhem (hospice) she served as both the union representative and safety officer.

Zaida Hagman joined SKV’s Bjurslätt division in 1962. It wasn’t long before she became the secretary and then the chair. During the 1982–2002 period she served as chair of the Gothenburg section of SKV and as such she planned and implemented the association activities, managed its networks and its finances. She was also involved in SKV’s internal bulletin. She regularly wrote for the members’ magazine, Vi mänskor, and from 1989 onwards served on its editorial board just as the magazine began to be distributed in Gothenburg. Zaida Hagman worked in SKV’s offices until she turned 65, after which she volunteered for the organisation until her death.

Following examples from Norway and Denmark, the women’s organisations in Gothenburg formed Kvinnocentrum in 1975. This was a politically unaligned umbrella organisation which aimed to set up a ‘women’s house’. The programme for this centre stated that Kvinnocentrum “supports all efforts seeking to generate equal opportunities for all regardless of sex and which confront gender roles, financial oppression, and the patriarchy”. Zaida Hagman and others had found the empty building situated next to Svenska Kullagerfabriken (SKF, Swedish ball bearing factory) at Gamlestadstorget. As a result of endless lobbying the Gothenburg municipal politicians finally decided in 1978 to cover the rent in order that the former Måsen pharmacy could be converted into a women’s centre. Within the building courses were held to repair and restore the building, there was a women’s refuge, as well as spaces for theatre and music groups to meet. Lectures, gatherings, and parties were also held at the premises. Later the enterprise moved into central Gothenburg and eventually developed into Kvinnofolkhögskolan (women’s folk high school) in 1985.

Zaida Hagman’s central interests lay in international solidarity and justice. On 15 May 1982 the Nordic peace meeting was held at Ullevi stadium, where 100,000 people gathered in order to demand a nuclear-weapon free zone within Scandinavia as well as nuclear-weapon free Europe. Zaida Hagman was involved in the planning and implementation of the meeting. In 1989 she travelled to the Murmansk peace festival, in the Soviet Union, attended by hundreds of youth and adults. The festival-goers demonstrated, displaying placards and shouting campaign slogans, in the Russian port town, home to ships bearing nuclear weapons.

Zaida Hagman had friends throughout the world whom she visited through Kvinnornas demokratiska världsförbund (KDV, Women’s international democratic federation), to which SKV belonged. KDV had been established following the Second World War in the hopes of setting up international collaborations between women in order to achieve lasting peace.

Zaida Hagman was a leading, entrepreneurial woman who always came up with new ideas. Socialdemokratiska Arbetarpartiet (SAP, Social democratic workers’ party) and Vänsterpartiet (V, left-wing party) sought in vain to recruit her but she rejected them both. She wanted to remain politically unaligned and remained an activist throughout her life. She formed collaborative ties wherever she was. She worked with Internationella Kvinnoförbundet för Fred och Frihet (IKFF, Women’s international league for peace and freedom), Kvinnor för Fred (KFF, Women for peace), the anti-nuclear Folkkampanjen mot kärnkraft, Kvinnofolkhögskolan, Kvinna till Kvinna and other organisations. She sat on many committees, including the one responsible for the annual celebration of International Women’s Day 8 March, and she was a driving force ahead of and participated in demonstrations and actions. She often held public speeches at Götaplatsen in Gothenburg.

One of her core interests was working hours, or rather the curbing of daily working hours. When the women of Socialistiska kvinnoklubben (Socialist women’s club) in Gothenburg also began to campaign for a 6-hour working day in 1987 Zaida Hagman was delighted. “At last! ‘We’ have pushed this issue since 1930. It is about time that we do so again. Almost all the political parties and trade-union organisations have, or have had, demands for this on their agendas but still nothing has happened”, she claimed. A petition on behalf of “6-hour working days at 8-hour salaries Now!” was initiated at Nordiskt Forum in Oslo in 1988, primarily organised by the Nordic ministerial council. This was a follow-up event to the international women’s conferences which had been held in Mexico City, Copenhagen, Nairobi, and Moscow. The theme for the week included women and work life, research, peace, power, humour, and health. SKV and Zaida Hagman made their contributions within the peace hall.

Zaida Hagman continued her activism and collected signatures at town squares and on the city streets, at offices and at gatherings held on the subject of 6-hour working days. In the autumn of 1990 the petitions were handed over to the current Minister of Employment Mona Sahlin. 17,359 people and 41 organisations – political, trade-union, and non-profit – had signed the petition. Several pilot projects were set up running 6-hour working days in several municipalities, within spheres such as home carers and at homes for the elderly. However these were only short-lived projects, despite the fact that they showed how staff members’ health improved and sick-days decreased. The campaign held an exhibition entitled “6 timmars arbetsdag och en god bok” which toured around the Gothenburg libraries.

In 1995 Zaida Hagman served as the Swedish NGO (non-governmental organisation) representative when the international women’s conference in Beijing, China was being planned.

The global women’s march against poverty and violence for justice and peace was a global grassroots movement set up ahead of the millennium in New York, USA. It was primarily a socialist movement in which 6,000 groups from 159 countries peacefully presented their demands and analysis to the United Nations. The closing ceremony was held by working groups and demonstrations across the world and when the women of Europe demonstrated in Brussels 30,000 women took part, including 200 Swedes – one of whom was Zaida Hagman.

Zaida Hagman died in 2004. She is buried at the cemetery beside Lundby old church in Gothenburg. 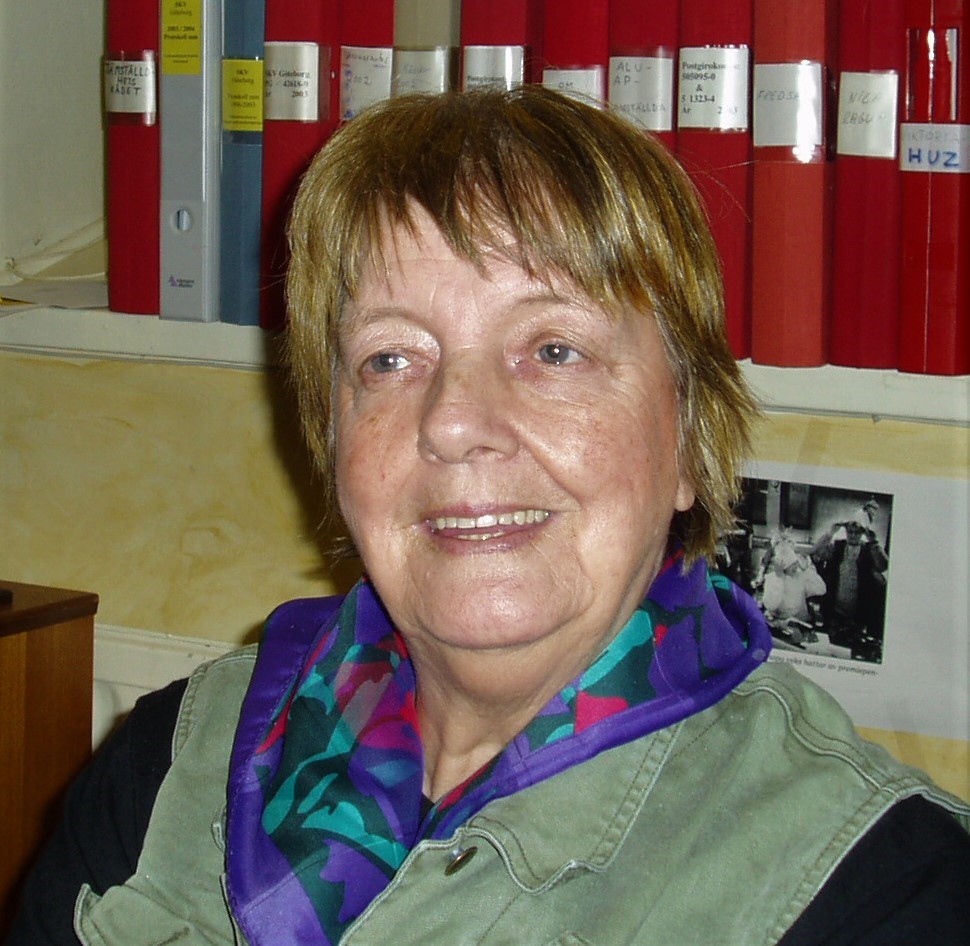