Antonie (Toni) Schmid was an archivist, historian and Tibetologist. She was the first woman to graduate with a doctorate degree in history from Lund University and her work on medieval book fragments in Sweden has been valuable for medieval research.

Toni Schmid was born in 1897 in Fischamend, Niederösterreich, near Vienna in present-day Austria. She was the only child of estate owners Antonia Maria, née Lindemmer, and Georg Josef Leander Schmid. Toni Schmid completed secondary school in Vienna in 1917. She studied at the University of Vienna from 1917 to 1922, with a break in 1921. That year she spent time in Stockholm and Väddö as one of the “destitute students” who came to Sweden after the First World War. While there, she learned Swedish. In Vienna, her subjects were Sanskrit, Paleography, Church History, and History at the Osterreichisches Institut für Geschichtsforschung (the current Institute of Austrian Historical Research, Institut für Osterreichische Geschichtsforschung). In 1922, she earned her doctorate at the University of Vienna with a dissertation about seventeenth-century Sweden: Innere Ur-sachen des Niederganges Schwedens im 17. Jahrhundert.

Several years later, Toni Schmid moved to Lund and enrolled as a student at Lund University in 1925. Her intention was to complete a doctoral degree, but she was forced to start from the beginning again. She completed her studies quickly and received her bachelor’s degree (kandidatexamen) in history the following year. Immediately afterward, she started her doctoral studies with Lauritz Weibull as her supervisor, and she participated in his graduate seminar. Toni Schmid was thus educated in the Weibulls’ historical method of source-criticism, which greatly influenced her later research and work. In 1927, she applied for Swedish citizenship with the motivation that her parents were deceased and she no longer had a strong connection to her country of birth. In addition, she expressed a desire to dedicate her life to history research in Sweden.

During her studies in Lund, Toni Schmid developed an interest in the life stories of local saints. She wrote her licentiate dissertation about the legends of Swedish saints who predated St Birgitta. In 1931, Toni Schmid earned her doctorate after writing her dissertation entitled Den helige Sigfrid. In this work, she applied Weibull’s source-criticism method in her study of the earliest documents about Sigfrid’s life. Her conclusions that Sigfrid’s legend was partly built on material borrowed from other saints’ legends and partly composed first in the thirteenth century caused a sensation in some communities in Småland

Her interest in saints and medieval Sweden continued even after completing her dissertation and resulted in the book Sveriges kristnande: från verklighet till dikt in 1934. In it, she analyses historical and liturgical sources, and concludes that the later narratives about the Christianization simplified the actual circumstances and that the relative paucity of source material has influenced our understanding of that period.

From this point on, Toni Schmid’s career was mainly dedicated to parchment fragment research. In 1929, she was affiliated with the Swedish National Archives (Riksarkivet, RA), and the year after, with the National Library of Sweden (Kungliga biblioteket, KB). For both institutions, she was to examine the parchment covers of early modern account books, which originally constituted thousands of medieval books. The national archivist, Isak Collijn, was the first to complete an inventory the fragments and he argued that a comprehensive study was of the utmost importance. Based on Collinjn’s report, the government decided in 1926 that a complete inventory and catalogue was necessary. The project was originally calculated to take three years, starting in 1930, but in the end, Toni Schmid spent over 40 years cataloguing the fragments.

Toni Schmid continued to receive state support for her work and the responsibility for cataloguing the fragments remained hers, even after the administrative authority for the fragment collections switched first from KB to RA in 1943, and then a year later to the Royal Swedish Academy of Letters, History, and Antiquities (Vitterhetsakademin). During this period, she wrote essays on the fragments and was responsible for several exhibitions at the Swedish History Museum in Stockholm in 1947, 1960 and 1964. She also published critical editions based on the exhibited fragments, of which the best known is Vallentunakalendariet (The Vallentuna Calendar, 1945), about a twelfth-century missal. Her analyses of the fragment material also led to a reconstruction of the medieval Graduale Arosiense, 1958–1965, a book originally printed for the Västerås Diocese.

From the mid-1940s, Toni Schmid and the fragments belonged to the Swedish National Heritage Board (Riksantikvarieämbetet, RAÄ), where she was first employed as an assistant and then antiquarian. In 1958, she finally was assigned an assistant, Oloph Odenius, who himself continued cataloguing the fragments until he passed away in 1984. Several years after Toni Schmid retired in 1968, responsibility for the fragments was returned to RA (1977), and the fragment collection and her catalogue are still housed there. The result of Toni Schmid’s and Odenius’ work was the card catalogue, Catalogus Codicum Mutilorum (CCM, “Catalogue of mutilated manuscripts”). Toni Schmid’s substantial work analyzing and cataloguing the fragment material comprised approximately 4,000 manuscripts and more than 10,000 fragments, which is about half of the actual total material.

Based on her finds from the account book covers, Toni Schmid wrote several essays and other works about medieval liturgy, church law, hagiography, and other Latin writings. For example, she discussed law texts in Canon Law in Manuscripts from Medieval Sweden, 1949. It is also worth mentioning her contribution to research about Saint Birgitta in Birgitta och hennes uppenbarelser, 1940, and in En latinsk variant av Birgitta-revelationer, 1941. These books placed Birgitta’s revelations in a historical and religious context, while contributing new information in the descriptions of previously unknown contents found on parchment fragments.

Other examples of Toni Schmid’s finds in liturgical fragments include Botolph’s Mass (a mass dedicated to an English saint) and Cantus sororum Vadstenensium (the “Song of the Sisters of Vadstena”). In addition, she addressed works written by several medieval authors on varied topics, from theology to law and medicine, including Master Matthias in Linköping’s (Birgitta’s confessor) writings on the Book of Revelations. Combining her studies on the fragment material and manuscripts, she also wrote about medieval medicine and other natural sciences in Medicinsk lärdom i det medeltida Sverige, 1951, and about astronomy, in Al Zarkali in Schweden, 1954.

Toni Schmid’s life was largely academic in character. She was a fellow of the Royal Society for the publication of manuscripts concerning the history of Scandinavia (Kungliga Samfundet för utgivande av handskrifter rörande Skandinaviens historia, SkS) from 1953 until her death. After moving to Uppsala in the 1930s, she joined the association Academicum Catholicum Upsaliense, founded by Jesuits in Uppsala. The group fostered an intellectual environment that appealed to many academics with an interest in theology. There, Toni Schmid met Ruth Svensson, a medieval doctor and Parasitologist. Theirs was a close, lifelong friendship; they even shared a household in Uppsala after Svensson retired in 1955. Within the association, they were known as the “learned ladies”.

In addition to her research in medieval history and theology, Toni Schmid conducted studies on Asia and became a Tibetologist. In addition to her earlier studies of Sanskrit at university in Vienna, she started learning Tibetan in the 1940s. These studies led to the writing of several books, the first of which was The Cotton-clad Mila, the Tibetan Poet-Saint’s Life in Pictures, 1952.

Toni Schmid, together with her friend Svensson, undertook a yearlong research trip to Nepal, Bhutan, Tibet, and Sikkim, from 1955-1956. Shortly thereafter, in 1958 and 1959, they traveled in Nepal and India, including Ladakh, for 6 months. During the first trip, Toni Schmid collected a number of objects and studied the language, culture, religion, and communities that they encountered. During the second trip, she focused on Tibetic languages and Lamaism. Svensson, for her part, studied the occurrence of parasitic diseases and parasites in the same regions. These trips resulted in two books by Toni Schmid, including Tantrisk mark, 1956, which were appreciated as useful introductions to Nepalese society and Tibetan Buddhism. Several articles and interviews with both scholars were also published, and in 1959, newspapers reported that Toni Schmid and Ruth Svensson had witnessed the Dalai Lama’s escape to India.

Toni Schmid’s colleague, Odenius, also became a close friend. At her passing, he had an executor role, responsible for dividing up the inheritance. Her scholarly book collection about Asia, including Tibetan books and her notes from her trips in Asia, were donated to the Museum of Ethnology, Stockholm. Several important works of art collected during these trips, including sculptures of Buddha, were given to Toni Schmid’s good friend and research colleague, Lili Gjerlöv in Oslo. Odenius kept the remaining objects and artefacts.

Toni Schmid remained unmarried and had no children of her own. Her significant contributions to history and medieval research became her life’s work. Toni Schmid died in 1972, at the age of 75, in Uppsala. 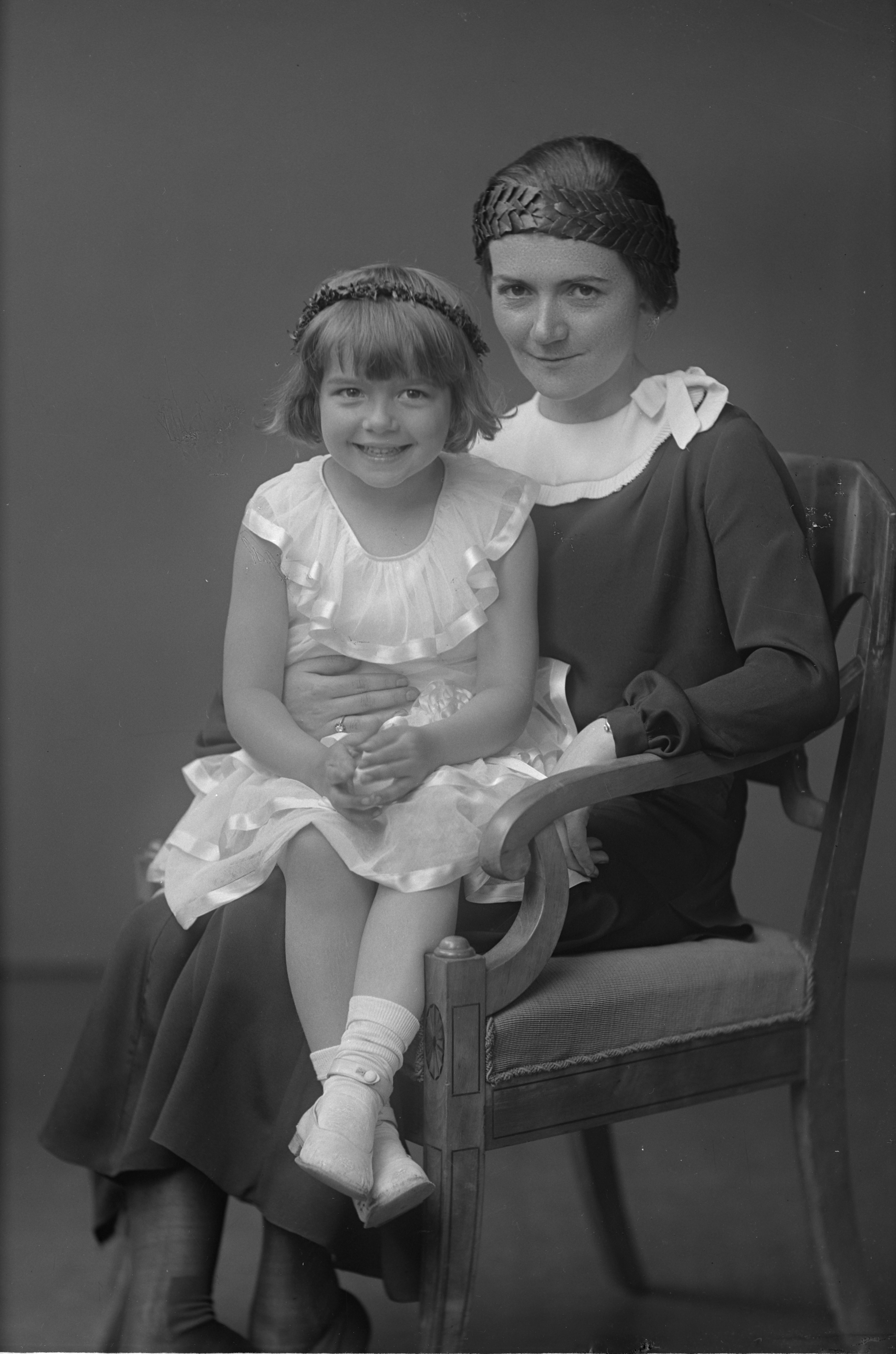