Elisabeth Glantzberg was one of the key figures within the world of Swedish sewing courses and fashion studios during the 1910s and 1920s.

Elisabeth Glantzberg was the daughter of a clergyman and grew up at parsonages in Transtrand in Dalarna and in Hed in Västmanland. She was the youngest of five children, and was one of four daughters. Her parents were Hilda Dorotea Arborelius and the parson Christian Magnus Glantzberg.

Elisabeth Glantzberg became a textile artist and a fashion director. She was also a businesswoman with her own company called Birgittaskolan. Her strength lay in her artistic and aesthetic talents. She was largely self-taught and does not appear to have had any formal training. Her family members exhibited a lot of aptitude for sewing and textile techniques. Her four sisters were all seamstresses and handicraft producers for most of their lives. Several of them also went on to work professionally within the world of textiles.

Around the turn of the twentieth century (1900) Elisabeth Glantzberg lived in the USA and was active there as a textile artist and instructor in Boston. Her brother, Ernst Glantzberg, had immigrated to the USA in 1891 and thus served as a pull-factor to her and her sisters, drawing them across the Atlantic. Once she was in America she spent the early twentieth century running a business called The Misses Glantzberg along with one of her sisters. This was not just a weaving school and a place to learn other textile techniques, but was also a shop and an exhibition space for Swedish traditional home handicrafts and home furnishings.

During the 1903 to 1909 period Elisabeth Glantzberg became an active member of the Boston Society of Arts and Crafts as a weaver, and exhibited her goods several times. She also held an exhibition in the US in 1920. Further, she also taught weaving and established a weaving course which could also as a ‘pastime for those with nervous disorders’ and the blind. She maintained her American connections for the rest of her life. She returned there several times until 1938.

In the autumn of 1909 Elisabeth Glantzberg moved back to Sweden and began to work at the children’s clothing section of Nordiska Kompaniet (NK). There she became acquainted with Emy Fick. In the autumn of 1910 they jointly set up the company Birgittaskolan.

Birgittaskolan was a sewing school and a fashion studio located at an address in the heart of Stockholm city centre and it attracted customers from the upper classes and the nobility. The school focused on courses in clothes-sewing which covered not only children’s clothes and underwear but also embroidery and bobbin lace work. Birgittaskolan was furthermore a textile studio which took on commissions for underwear, artistic sewing work, woven images, tapestry work, and woven rugs. The school courses were divided into shorter and longer courses. The shorter courses were suited to those wanted to learn to sew their own, or their children’s, clothes. The longer courses which lasted six months took the form of professional training. Birgittaskolan was probably influenced by similar enterprises at the time but appears to have been the first of its kind in Sweden which comprised both commission work and a teaching section.

Elisabeth Glantzberg’s interests mainly lay in the aesthetic plane. Her strength lay in her artistic expression and she was inspired by modern art. At Birgittaskolan this became particularly evident. From 1917 onwards she employed both Siri Derkert and Valle Rosenberg to design two clothing collections every year for Birgittaskolan. The Parisian influence – it was in Paris that many of the artists of the era researched the borders between art and clothes – can be seen in their collections which are remarkable for their daring and creativity. Elisabeth Glantzberg really strove for these to be ‘artistic clothes’ and chose artists who expressed the modern idiom.

Elisabeth Glantzberg sought to create a domestic fashion for which Birgittaskolan could create unique designs and not have to acquire patterns from Parisian fashion houses as several contemporary Swedish fashion studios did. She also does not appear to have been unfamiliar with off-the-peg clothing. It seems that she wanted her enterprise to include both exclusive haute couture and simple everyday wear. It was never a question of sewing in great quantities. However, Birgittaskolan also created sports clothes which had been intended for slightly larger quantities.

Elisabeth Glantzberg was also very interested in weaving. In this regard she was informed by Swedish rural aesthetics, just like she had done in America, but she oriented herself towards modernism even in weaving. Her ambitions to connect rural aesthetics to modernism were expressed in Vävboken. Handbok för hemmet och skolan, from 1925, edited by Aina Montell. Elisabeth Glantzberg contributed a chapter entitled ‘Moderna textilier’. She also wrote several other articles on clothes and textiles, both in the USA and in Sweden.

Through Birgittaskolan Elisabeth Glantzberg was involved in several home furnishings exhibitions, such as the 1917 Hemutställning at Liljevalch’s art gallery and in an exhibition in conjunction with Carl Malmsten in 1919. Her customers included people who were liberal-minded, radicals, self-employed, and educated women, amongst whom many were challenging the heterosexual matrix by living in same-sex relationships. Her social network comprised several women from the female corps of lawyers and women who were active in the suffragette movement.

Elisabeth Glantzberg ran her business in Stockholm until the mid-1930s, and even for a few years after that. In her later years she moved back to Älvdalen in Dalarna where she rented a small log-cabin on a farm in Loka, and gave evening classes in weaving. For a time she also ran a hostel. In 1940 she moved to Älvdalsåsen, to the area where she had grown up. For a number of years she ran a weaving school there with hired weavers.

Elisabeth Glanzberg died in Älvdalen in 1951. 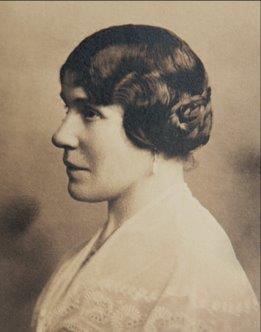