Elli Hemberg was a painter and sculptor. Her place in Swedish art of the 1900s is as self-evident as it is unique when it comes to architectural sculpture. She developed the visionary, aesthetically stamped modernism of the 1900s to its absolute and final pinnacle.

Elli Hemberg was born in Skövde in 1896 and grew up in the town vicarage since her father was the rural dean. Her mother looked after their home and sometimes grabbed hold of a watercolour paintbrush, although upon her marriage she mainly put this aside. Elli Hemberg matriculated in 1915 in Uppsala with top marks in chemistry and drawing. She said much later that chemistry attracted her, but she chose art. Her choice of profession did not please her father. However, Elli Hemberg circumvented this by educating herself as a laboratory assistant at the Karolinska hospital and then being employed as an illustrator at the national natural history museum in 1917 before she continued by studying for Carl Wilhelmson at his private school of painting in 1918—1922. His teaching was characterised by a fresh palette and cubism as his form theory, which influenced Elli Hemberg throughout her life. She married Sven Erlandsson, a physician, in 1923. After her marriage she was registered in the national records not as Elli Hemberg but as Elin Elisabeth Erlandsson; however, only one work by her is signed Erlandsson.

Elli Hemberg had her first separate exhibition in Stockholm in 1942. She had then left the new realism of the 1920s in her painting and gone over to painting more influenced by synthetism with themes like landscapes, still life and portraits. From the beginning of the 1930s, summers at Kaggfjärden in Grödinge came to mean a great deal for her development. Intensive studies of nature, light and atmosphere led to the spatial deepening of external motives in her paintings. This led her around 1950 to continue to reduce the figurative in favour of experimenting with purely abstract compositions. The investigation of two- and three-dimensionality in painting, relief and sculpture occupied her during the following decades. However, Elli Hemberg never became a constructivist or concretist. For her, other points of departure were relevant, like understanding contexts and perceiving the construction and complexity of being. The transcendent perspective must be seen as a key concept for her late artistry.

A significant exhibition for her artistic deepening was that shared with Otto Gustaf Carlsund at Konstnärshuset in Stockholm in 1947. The reviews were many. Lars-Erik Åström wrote in the major evening newspaper Expressen that ”she obliterates everything that is material and accidental in her striving to capture the soul of light and colour.” Elli Hemberg published a catalogue of aphorisms for the exhibition: Ur mina anteckningar 1939–1947. The aphorisms probed her artistry’s problems with colour and form.

Elli Hemberg eventually left the figurative and representative completely, and totally focused her work towards a three-dimensional form endeavour in which form created movement and light gave colour. Some public works like the sculptures Virvelvind in 1970, situated outside the entrance to Riksarkivet in Stockholm, and Ljusfångaren in 1973, at Skåvsjöholm waterside, suggest what was to come. However, it did not happen overnight but was the consequence of many years’ work, questioning and investigating her own artistry.

Absolutely decisive for Elli Hemberg’s continued artistic activity was that she, according to her own exact dating, on 2 November 1949 received in her hand Jay Hambidge’s book The Elements of Dynamic Symmetry, that had appeared in a new edition the previous year. Hambidge’s book on the theory of proportion bewitched her and led to her analysing art from the oldest Egyptian reliefs to her own times, above all the compositions of Juan Gris. In Hambidge’s theories, she found a creative tool, a theory, so that she herself could hone the work of constructing form which she was already well on her way to doing, and which attained its magnificent peak in her architectural sculptures of the 1970s and onwards.

Dynamic symmetry is nature’s own system of proportion, that permeates all living things, everything organic. This organic rhythm system, bound by law, that differs from the static two-dimensional, is expressed in the proportion 1.618 which stands for a natural law-bound state. However, for Elli Hemberg this dynamic symmetry was not a dogma. For her it became a vastly creative theory of form to change the two-dimensional surface of an image into a three-dimensional sculptural form. In the Echnaton exhibition at Nationalmuseum in 1975, Elli Hemberg saw that the ancient Egyptians applied the same mathematical root system, the root of two, with which she herself was profoundly occupied. This gave her renewed energy with which to develop architectural sculpture and free sculpture. The form theory of dynamic symmetry can be said to have functioned as a catalyst for a great thought and idea complex with roots in the artist’s childhood religiosity but even more in the mature artist’s own perception of the universe. In her architectural sculpture, Elli Hemberg was able to show an existential attitude presented visually in the beauty, rhythm and harmony of proportion.

Carlo Derkert was fascinated by Hemberg’s architectural sculpture and was of the opinion that had she been a man, she would have been as great as the French architect Le Corbusier. Not everyone was however convinced that it was possible to execute her proposals of artistically created architectural sculptures on a large scale. Arkitekturmuseet in Stockholm belonged to those who rejected her. Building expert Arnold Larsson in Linköping showed however in 1976 that it was possible when he had her work Ovalen constructed full scale in reinforced concrete as a windbreak at a bus stop at Tornby in Linköping. It has now been moved to a lawn and relieved of its original function. Some years later, Stockholm city commissioned Fjärilen, a combination of a refuge from weather and wind or for lovers, and a butterfly-like free sculpture to be situated on an open lawn in Rålambshov Park. It was erected in 1980. Her architectural sculptures based on the creative principles of dynamic symmetry are unique, not only on the Swedish art scene. Her flow of ideas for architectural sculptures was unusually prolific, not to say infinite, for functions that could be considered, like music rooms, churches, underground stations, holiday cottages and windbreaks. These works were given their own titles even though they could be seen as purely abstract forms.

During her long, active artistic life, Elli Hemberg participated in many exhibitions and competitions. She also had to endure the conditions that applied for a woman artist. However, her last active decades were successful and she received a great deal of appreciation. She worked on public decorations well into her old age. The earliest one is from 1942: Äppelplockerskor a mural at Sabbatsberg hospital in Stockholm. The last ones are the sculptures Isringar in Skövde and Vågen slår över in Östersund, both in stainless steel, about 3 metres tall and erected in 1989. 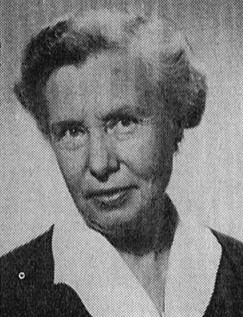