Emilie Flygare-Carlén was Sweden’s most widely read and well-known author, both within and outside of Sweden during the second half of the nineteenth century. She became famous for her realistic family novels and depictions of the Swedish west coast.

Emilie Flygare-Carlén grew up in Strömstad in Bohuslän. She was the youngest daughter of Margareta Stiegler and the merchant Roger Smith. When she was 20 years old she married Axel Flygare who was a doctor in Småland. They had three children together, but only the eldest, Edvard, survived into adulthood. Five years into the marriage Axel Flygare died and both his widow and children were left without an income. Emilie Flygare-Carlén returned to Bohuslän. In 1834 she became engaged to the lawyer Jacob Reinhold Dalin. Shortly before the wedding, however, Dalin passed away. Their child Rosa, who was born six months later, was adopted and brought up by her father’s relatives. She later became well-known as the author Rosa Carlén. She shared her mother’s surname because she married the lawyer Richard Carlén, who was her mother’s brother-in-law, in 1856.

Emilie Flygare-Carlén began to write in order to provide for herself and her family. In 1838 she published her first novel entitled Waldemar Klein. It was released as part of the “Kabinettbibliotek” (cabinet library) series of books, and led to the publisher Niclas Thomson immediately signing Emilie Flygare-Carlén with a contract. He also persuaded her to move to Stockholm. In 1841 Emilie Flygare-Carlén married Johan Gabrielle Carlén, a poet and publisher of the annotated writings of Bellman. The marital home became a gathering point for liberal cultural personalities in Stockholm. The social circle included the authors C. J. L. Almqvist and A. Blanche, as well as the founder of Aftonbladet L. J. Hierta.

Emilie Flygare-Carlén’s breakthrough with the Swedish public came with the publication of her novel Rosen på Tistelön in 1842. This is considered to be the first literary portrayal of the west coast in Swedish. The novel is based on a genuine criminal case and recounts what happened to the families of both the accused and the victim afterwards. Later, during the 1840s, Emilie Flygare-Carlén published several of her most acclaimed and internationally famous novels: Pål Värning, 1843, Vindskuporna, 1845, Ett År, 1846, and Enslingen på Johannisskäret, 1846. Quite a few of these were also adapted to the stage. For example, Mauritz Cramer’s play Brottslingarne, 1843, was an adaptation of Rosen på Tistelön.

Emilie Flygare-Carlén took a break from writing after 1851. This coincided with the loss of her son Edvard and a period during which she had received harsh reviews for her work. Her negative portrayal of the contemporary free church revivalists in the novel En natt vid Bullarsjön, 1847, led to protests and Ett rykte, 1850, was criticised for the main female character’s ambiguous morality. The leading opinion maker at the time was the editor of Aftonbladet Carl Fredrik Bergstedt who, in his article “Om den usla litteraturen” published in 1851 in Tidskrift för litteratur, described Ett rykte as the most offensive novel he had ever read.

In 1859 the cultural editor August Sohlman persuaded Emilie Flygare-Carlén to take up writing again and she produced another west coast-based novel. Ett köpmanshus i skärgården was published as a serial in Aftonbladet from January to June in 1859. It was subsequently published as a book by Bonnier in 1860-1861. Prior to that it had already been released in German by two separate publishers and in two different translations, confirming Emilie Flygare-Carlén’s position in the European literary market.

Ett köpmanshus i skärgården was Emilie Flygare-Carlén’s last novel. During the 1870s she only published short stories in Svenska Familj-journalen. She wrote two autobiographical works which became widely read both within and outside of Sweden, Skuggspel, 1865, and Minnen af svenskt författarlif 1840-1860, 1878. She emphasised that her writing was mainly based on actual events. In Minnen she portrays the social life she and her husband enjoyed in their home and their frequent guests, who formed Stockholm’s cultural elite.

Emilie Flygare-Carlén dominated the Swedish fictional literature of the 1830s and 1840s along with Fredrika Bremer, Sophie van Knorring and Carl Jonas Almqvist. Several of her novels are situated in Bohuslän and depict how the people of the west coast people lived, an environment familiar to her since her early years. Her last novel Ett köpmanshus i skärgården is marked by her attempt at increased realism. The novel not only contains some of the author’s most complex portrayals of female characters but also, like earlier works, serves as a contribution to the contemporary women’s debate, discussing gender roles and the lack of women’s rights in marriage and the wider society.

In many respects Emilie Flygare-Carlén holds a special position as a female author of the mid-1800s. In contrast to her contemporary female colleagues she chose to publish using her own name, which made her an early example of an independent professional author who used her name as a trademark. She was also a talented businesswoman. She chose her publishers carefully and was an astute negotiator. Following the success of Rosen på Tistelön she began to pit publishers against each other in order to extract higher fees from them. She successfully raised her fee almost ten-fold, from 5 to 50 riksdaler, within four years. This made her Sweden’s most highly-paid author, a position she retained for the rest of her life. When Ett köpmanshus i skärgården was first serialised in Aftonbladet she initially received a princely fee for it. Subsequently Adolf Bonnier paid an enormous fee for the publishing rights to the novel, but he also obtained a contract with her allowing him to publish her other work in return for a generous payment. In addition, unlike the majority of her contemporaries, she also received payments from foreign publishers.

Emilie Flygare-Carlén was given a lot of proof of how treasured she was toward the end of her life. In 1862 she was awarded the gold medal by the Swedish Academy for “her true-to-nature and patriotic depictions, not least with regard to life in the Swedish archipelago with all its dangers”. She was frequently invited to and honoured by Publicistklubben. Several expensive and illustrated editions of her collected novels were released in both Swedish and in translations into other languages, including Danish, Norwegian and German.

From the middle until the end of the nineteenth century Emilie Flygare-Carlén was Sweden’s most translated and most widely disseminated author. It was only in the English-language sphere – Great Britain and America – that she faced competition from Fredrika Bremer. Elsewhere in Europe, such as the German-speaking countries and in Central and Eastern Europe, she figured among the most-read international novelists along with Charles Dickens, Eugène Sue and Alexander Dumas the elder. Translators and publishers competed to publish her novels and several authors wrote sequels to her stories, whilst publishers also used her name to advertise the work of other authors. Emilie Flygare-Carlén’s name came to represent proof of quality when attracting a readership and as a trademark for selling novels on the European and American book market.

Emilie Flygare-Carlén died in 1892. She is buried at the Norra cemetery in Solna where a monument is also erected in her name. 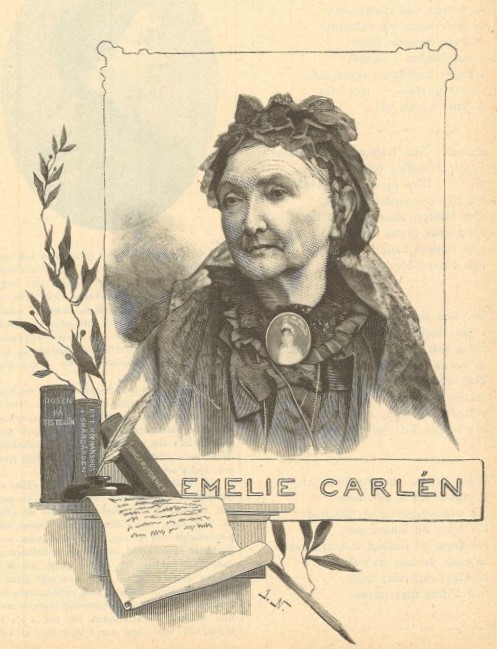