Greta Hammarsten was a medical consultant at the Södersjukhuset clinical-chemical laboratory, and a biochemist and senior lecturer in clinical chemistry. She was a pioneer with a deep interest in analytical techniques.

Greta Hammarsten was born in Stockholm in 1896. Her father Karl Henrik Vilhelm Norrbin was a construction engineer and her mother Gerda Constantia Mathilda, née Nordström, came from a fish merchant family in which both parents were born on the Baltic island of Åland and belonged to the Finnish congregation in Stockholm.

In 1902, Greta Hammarsten started attending the Lychouska school in Stockholm and in autumn 1911 she moved to the Södermalm girls’ grammar school (currently Södermalmsskolan). It is possible that she met Ada Nilsson, who worked there as school doctor, at that time. Greta Hammarsten did not complete her studies, but started working at the insurance company Skandia in 1914, where she remained until 1918. In August the same year, she married Einar Hammarsten, professor of chemistry and pharmaceutics at the Karolinska Institutet.

In 1919, Greta Hammarsten started working as a private assistant at the Karolinska Institutet’s department of chemistry, where she remained until 1927. She was very interested in natural sciences and particularly in chemical analysis. In 1924 she travelled to Austria and studied microchemical analytical methods at the University of Graz. Four years later, she divorced Einar Hammarsten.

In 1927–1931, Greta Hammarsten studied in periods at Carlsberg’s Laboratory in Copenhagen for Søren Peter Lauritz Sørensen and Kaj Linderstrøm-Lang. She published two ground-breaking articles about the theoretical grounds for understanding lithiasis. The first appeared in 1929, and dealt with the formation of kidney stones through the accumulation of calcium oxalate. She showed how magnesium salts contribute to solubility and reduce the risk of lithiasis. The same year, she also participated at the Scandinavian natural scientists’ research meeting in Copenhagen.

In March 1930, Greta Hammarsten started studying at Lund University and was appointed as an extra ordinary teaching assistant at the department of chemistry. In 1931, she participated in the third Nordic Congress for Physiology in Copenhagen. Her next large-scale analytical work appeared in 1932 and dealt with the solubility of uric acid and its salts, which affected lithiasis in the urinary tract.

In July 1933, Greta Hammarsten was appointed as a teaching assistant at Lund University, and in September the same year she took her Bachelor’s Degree in Medicine. In 1936–1938 she worked now and then as a temporary clinical laboratory assistant at the department of clinical medicine, and as acting clinical laboratory assistant from October 1938 until September 1939. In 1936, Greta Hammarsten travelled to Finland to participate in the Scandinavian natural scientists’ meeting in Helsinki. The year after, she participated in the physiology congress in Uppsala.

In 1930–1944 Greta Hammarsten published a series of articles on the connection between nutrition and kidney stones, based on experiments with rats fed on an acidogenic diet rich in oxalic acid but poor in magnesium, thus causing lithiasis. According to her work, a diet rich in vitamins and with a suitable calcium and magnesium content leads to the dissolution of kidney stones. Based on this, Greta Hammarsten emphasized the importance of vitamins, calcium and magnesium in the human diet, to counteract lithiasis in the urinary tract. In April 1940 Greta Hammarsten was awarded her doctorate, after having publicly presented her thesis in 1937. She started working as a senior lecturer in medical and physiological chemistry. Her thesis, Calciumoxalat als Steinbildner in den Harnwegen, was a significant work that led to her being asked to write a chapter on “Calcium Oxalate Stones” in Arthur J Butt’s handbook Etiological Factors in Renal Lithiasis in 1956. She also wrote a 25-page-long article on nutrition and health in Kvinnans egen läkarbok from 1950.

In 1940, Greta Hammarsten started working as an extra clinical laboratory assistant at the Karolinska Institutet, posted at the Serafimerlasarettet. Serafimerlasarettet was both a healthcare institution and a teaching and research institute. Five years later, in 1945, she was made a consultant and director of the clinical-chemical central laboratory at Södersjukhuset, where she remained until 1962. In February 1946, she was appointed senior lecturer in clinical chemistry at the Karolinska Institutet. Under Greta Hammarsten’s leadership, the clinical central laboratory at Södersjukhuset expanded and became ”[…] a natural centre for significant parts of the hospital’s scientific activities”.

Greta Hammarsten became the chief editor and checked all the analytical methods (with a few exceptions) included in the book Kliniskt-kemiska analysmetoder, part of a series on Clinical chemistry published by Astra in 1947. According to Erik Jorpe’s article in Svenskt biografiskt lexikon (SBL), it was thanks to Greta Hammarsten’s ”[…] thorough education, great demands on exactitude and extensive work capacity” that this work became standard for laboratories in the Nordic countries. Apart from her work on kidney stone disorders, Greta Hammarsten was also interested in rheumatic disorders and blood and liver illnesses. According to SBL, she was a ”[…] much consulted expert in the field of blood disorders”. In collaboration with Swedish and Danish colleagues in 1950—1953, she also carried out a number of ”[…] experimental-physiological experiments that clearly showed that degenerative liver conditions affecting the blood structure and developed after a ligature of the bile duct can be alleviated or prevented if the animal is carrying a living foetus, is living in parabiosis with an individual of the same species or is given spleen extract.”

In 1951–1956, Greta Hammarsten was made a board member of the Stockholm Zonta club, and also held club meetings in her own home. Zonta International is an organisation founded in New York in 1919 by university-educated professionally active women, with the aim of engaging in working for gender equality and women’s rights. Greta Hammarsten belonged to the first club in Sweden, started in 1935.

Greta Hammarsten was also a member of Sällskapet Nya Idun, a women’s association founded in 1885 that initially consisted of a small circle of women working scientifically, artistically, pedagogically, socially or in literature. She was also active in the International Federation of University Women (IFUW, currently Graduate Women International, GWI). In Sweden, the academic women’s association Akademiskt bildade kvinnors förening (ABKF) was started in 1904 and changed its name in 1947 to Kvinnliga Akademikers Förening (KAF). In 1922 it joined the international network IFUW.

In 1965, Anders Grönwall wrote in an obituary over Greta Hammarsten that she ”[…] left her consultancy at Södersjukhuset [...] warmly praised by friends, co-workers and colleagues”. She held a farewell lecture on what Grönwall called her ”darling and special subject – lithiasis in the urinary passages”. Furthermore, he found that she was probably very satisfied with her life’s achievements and that her work had been ”of great benefit to her fellow men”.

Greta Hammarsten published over eighty works during her career, on physical and physiological chemistry and nutritional physiology. She died in Stockholm in 1964, and was buried at the Northern Cemetery in Solna. 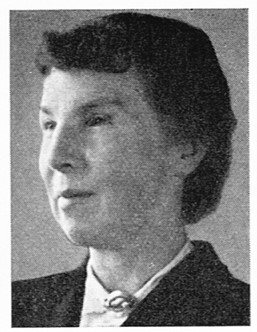