Gun Widmark was Sweden’s first woman professor of Nordic languages. Her appointment was at Gothenburg University. She was also professor of Swedish language, especially Modern Swedish, at Uppsala University. Her research focused on Old Norse and runic script, language cultivation in the 1600s, court language during the 1700s, Fredmans epistlar, dialects, place names and gender variations in language.

Gun Widmark was born in 1920 near Eskilstuna. She was the daughter of a farming couple, Signe and Conrad Gustafsson, and she grew up on the farm Balsta in Stenkvista parish. She matriculated in 1939 at the Eskilstuna grammar school (now St Eskils gymnasium) and the same autumn, she was registered at Uppsala University. She was to remain in Uppsala, with a few brief breaks, for the rest of her life. Her studies went well and in 1942 she gained her B.A. Two years later she took her M.A. and after further studies of the Nordic languages, she was awarded her Licentiate in 1951. Nordic cultures were her central interest and after her Licentiate she held a post for three years as Nordic lecturer in Reykjavik, at Háskóli Íslands (Iceland’s university). Her time in Iceland is mirrored by several titles in her scientific production.

The next goal achieved was her doctorate in 1959, with the thesis Det nordiska u-omljudet. En dialektgeografisk undersökning. Her examiner was a senior lecturer from Lund who was rather critical towards her thesis, as is shown in a published article based on his examination. Gun Widmark already demonstrated proof of academic confidence in her long, well-formulated response in article form and published in the same journal. She was made a senior lecturer the same year as she took her doctorate, again on the basis of her thesis. During the following year, she held an appointment as a lecturer at the department of Nordic languages at Uppsala University, and in 1970, as the first woman ever, she was awarded a professorship in Nordic languages at Gothenburg University. Three years later, she returned to Uppsala, now as professor of Swedish language, especially Modern Swedish. She held that professorship until her retirement in 1986. The last academic distinction she was awarded was an honorary doctorate at Åbo Academy in 2005.

Gun Widmark married Nils-Ola Nilsson in 1943 but the couple were divorced after seven years. In 1956, she married Gusten Widmark, an archivist, and the marriage lasted until his death in 1988. Gun Widmark had no children of her own, but she had one godson, Patrik Hadenius, with whom she was close. During the last years of her life, Gun Widmark renewed her contact with an old love from her youth, Olov Lönnqvist. He was a meteorologist but also interested in history and Swedish linguistics. He shared Guns Widmark’s interests in among other subjects Swedish drama from the 1600s. They remained a couple until his death in 2007.

Gun Widmark’s contribution to her field of Nordic research is invaluable. With her thesis in 1959 as the starting point, her active research stretched itself over almost 55 years. She retired in 1986, which in no way reduced her scientific productivity – on the contrary, over half of her around 180 publications appeared after her retirement. She was an active researcher up until her death. A second part of her thesis appeared in 2010: Det nordiska u-omljudet. Del 2, and at her death she was working on the issue of the continental influence on the language of the Viking era.

With these two works on language history as a framework, it would be easy to gain the impression that Gun Widmark’s main research interest lay in this field, but that would be too simple a conclusion. She was strongly engaged in the subject of the development of the Nordic languages and some of her early publications dealt with language cultivation and modern grammatical changes, like for example the classic ”Är färsk sill god eller gott?”, published in Språkvård in 1965. She was also one of the founders of the language association Språkvårdssamfundet in Uppsala in 1961, of which she became the first chairperson. She was the chairperson of the Swedish Language Committee in 1978–1987. In the latter, she was not only the first woman chair, but also the first woman board member at all.

Language cultivation issues mirror Gun Widmark’s interest in modern language, as does her interest in the new and expanding field of language sociology at the end of the 1960s. She was one of the initiative-takers to the research section FUMS, Forskning och utbildning i modern svenska, started in 1967 at the Department of Nordic Languages at Uppsala University. For about 20 years, she was also the chairperson of this section. She published several articles in this field, for example ”Generationsskillnader i språket” in 1970 and ”Språkförändring och socialgruppsbyte” in 1973. Gun Widmark also became one of the foreground figures in the developing research field on language and gender. When she became professor at Uppsala in 1973, she chose the subject of women’s language – ”Om kvinnospråk” – for her inaugural lecture. She published articles on the subject and planned projects, like for example Forskning kring könsroller i språk (Projekt och planer vid FUMS 1978, together with Kerstin Nordin).

Gun Widmark used her broad research competence when she took on new research issues. Classic Nordic language history had by preference dedicated itself to older phases of the language, which Gun Widmark also did in her thesis and many later writings. However, she rediscovered the linguistically interesting centuries of the 1600s and 1700s. Here she was able to combine her interest in language history, language cultivation and linguistic variations in style. She highlighted linguists like Petrus Lagerlöf in the 1600s and Sven Hof in the 1700s, and pointed out their significance for the development of Swedish as the national spoken language. Gun Widmark had a deep interest in variations in Swedish spoken language, historically as well as contemporarily, and this combined with the newly discovered Modern Swedish epoch gave rise to Nordic classics like ”Stildifferentiering i Gyllenborgs komedi Swenska sprätthöken” in 1969 and ”Boksvenska och talsvenska. Om språkarter i nysvenskt talspråk” in 1991. Here she displayed above all how first and foremost the language of social intercourse and official language have interacted and how language features have wandered from one to the other.

Gun Widmark’s production as a researcher is framed by her works on the u umlaut; and she returned regularly to ”classic” Nordic subject matters. Apart from her geographical dialect explorations and descriptions of sound transitions in Old Norse among much else, she also left considerable contributions to runology, for example with her new interpretation of the Rök runestone in 1997: ”Tolkningen som social konstruktion. Rökstenens inskrift”. She also wrote about place names, about dialect words like ”drög”, ”lortlolla”, ”lenhal” and ”lönnhal” and about the Nordic language community. She had the capacity to see possibilities in new theories and methods, like for instance the fruitfulness of applying a language-sociological perspective to language transformation in older Swedish or of using drama dialogue to approach variations in spoken language during the 1700s.

Gun Widmark received a number of awards and distinctions for her research, among them the Rettigska Prize from the Kungliga Vitterhets Historie och Antikvitets Akademien in 1999, the Swedish Academy’s Royal Prize in 2006, the Uppsala University Torgny Segerstedt Medal in 2006 and the Swedish Academy’s language research prize in 2009.

Gun Widmark lived during an epoch that brought with it great changes for Swedish women. As has been shown, she was often the first woman in various contexts, and she reflected over that herself in the article ”Kvinnorna och språkvetenskapen – några personliga reflektioner” in 1992. When she started at the Eskilstuna grammar school in 1932, it had only been open to girls since 1927. In her home parish Stenkvista, there was no other opportunity for higher education, and Widmark was not only the first girl from the parish to start grammar school but also the first parish inhabitant at all to be able to start at the grammar school. It led her on further to university studies, and there she had no feeling whatsoever that the women students were subjected to special treatment or discrimination in any way. As she herself put it: ”I have no feeling that the long road to a doctorate was harder for me than for my male student comrades”. However, what she did miss was other women student comrades, and above all women role models in the academic world. She herself became the role model that she had lacked.

Gun Widmark died when she was 93 years of age, scientifically busy to the last. She is buried in Hammarby Cemetery, south of Uppsala. 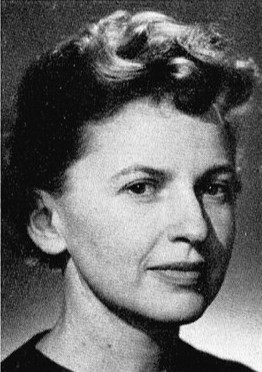