Julia von Sneidern was a doctor who also served as one of the first female school doctors in Sweden. She, along with Ada Nilsson, founded Föreningen frisinnade kvinnor (society of liberal women) in 1914.

Julia von Sneidern was born in 1874. She spent her earliest years in Haparanda. She was the eldest of five siblings, albeit two of her sisters died when very young. Her parents were of Central-European stock and were members of the Jewish congregation in Stockholm. Her father, Elias Rosenbaum, was probably born in Poland in 1838. He was a shop assistant who later became a merchant in Haparanda. However, he died in 1881 during a hospital stay in Stockholm. Her mother Bertha Schenk, originally from Vienna, had come to Stockholm as a child. In 1883 she married Marcus Rosenbaum, a manager from Stockholm, and the national press noted that “this was the first civil marriage to have occurred in the most northerly part of the kingdom”. The couple settled in Stockholm and it was not long before the family came to include another four children, albeit the youngest daughter died in infancy. The family became increasingly well-to-do. Julia von Sneidern’s step father set up a transport and transfer company which was later taken over by his brother, Carl. Julia von Sneidern’s mother acquired property at Hagagatan 13 in 1901. Her eldest brother, Moritz, was a pharmacist and her youngest brother, Ludvig, was a district land surveyor and became a municipal engineer who participated in the Spitsbergen expedition of 1931.

Julia von Sneidern attended the Latin section of the Wallin school in Stockholm and gained her school-leaving certificate on 21 May 1892. She was subsequently briefly enrolled at Stockholms högskola (college). She enrolled at Uppsala university in the autumn semester of 1893 becoming a member of the Stockholm nation of students. There she studied for the preparatory medical-philosophical exam which she was awarded on 31 January 1894. She continued her studies in Stockholm at Karolinska Institutet (KI) during the spring 1894 semester. At that time there were 18 women enrolled a KI, all at different stages of their studies. Julia von Sneidern fellow students were Anna Ahlström, Elin Beckman, Anna Dahlström-Nilsson, Maria Folkeson, Thora Granström, Sofia Holmgren, Hertha Johansson, Signe af Klintberg, Signe Knoch, Anna Lovén, Matilda Lundberg, Sigrid Molander, Ada Nilsson, Siri von Porat, Ellen Sandelin, Anna Stecksén and Alma Sundquist.

In 1898 Julia von Sneidern was awarded her Bachelor’s degree in medicine. That same year she married fellow medic student Olof Kinberg. Their son Sven Olof ‘Olle’ Moritz was born in the spring of 1901. Julia von Sneidern joined the Uppsala kvinnliga studentförening (UKSF) (Uppsala female students’ society) in 1904. She served as the society chair between January and September 1906. In 1907 she was awarded her medical licentiate degree from Uppsala university and that year she also joined Svenska Läkaresällskapet (SLS) (Swedish medical association). In June 1907, as a new graduate, she gave a talk entitled “Om sexuell hygiene från pedagogisk synpunkt” at the public-school teachers’ meeting in Jönköping. This was a subject which Karolina Widerström also lectured on and Julia von Sneidern later returned to it. She opened a private surgery at Riddargatan 23, specialising in nervous disorders and hypnotherapy, and lectured on topics such as sexuality, the legalisation of prostitution, and social policies.

In the spring of 1908 the SLS advertised a prize competition for sexual education publications for young people, directed at parents and teachers and intended to “in a sober and measured, natural and tactful manner educate the young in this sensitive area”. The prize jury comprised Magnus Möller, A. G. Nyblin, and Karolina Widerström. Julia von Sneidern and Alma Sundquist were awarded first prize for Handledning i sexuell undervisning och uppfostran. These works first gained public attention in the spring of 1910 when they were positively reviewed in Dagny. This initiated its use as a theoretical football in a discussion including neo-Malthusianism, eugenics, contraception, and morality. As a result of this debate the so-called contraceptive law was set up in the summer of 1910. It was enacted as law during the 1911 parliament and was only removed in 1938. It entailed, in part, that public information about and the sale of contraceptives became punishable by law and could lead to up to two years’ imprisonment. In the meantime doctors had the right – in certain cases – to prescribe contraception which could be sold by pharmacists.

Julia von Sneidern’s social interests and involvement in eugenics formed part of her extensive interest in psychiatry. She also attended the Svenska Läkaresällskapet meetings and made her views on psychoanalysis known in 1913 and 1916. She was appointed school doctor to the Älvsjö public school from 1910 to 1915. From 1913 to 1922 she also served as doctor and investigative doctor at Brännkyrka congregation public schools. She was employed as nurse there in 1913, which was unusual at that time. She had already put herself forward for the elections to the school council elections in Brännkyrka but had been forced to withdraw her application given that her “Jewish faith” rendered her unelectable. She also served as deputy chair of Svenska fatigvårdsförbundets barnavårdsbyrå (Swedish poor relief society’s child welfare agency) in Brännkyrka from 1912–1913. She was also deputy chair of the Brännkyrka Mjölkdroppe society in 1914. Within the sphere of psychiatry she held a variety of positions as supplementary doctor and junior doctor at Stockholm municipal mental health hospital and at Långbro. She was appointed doctor at the Östermalm polyclinic in Stockholm in their department for nervous disorders from 1917–1918, as well as doctor at the Värmland-Eda swimming site in the summers of 1916–1919.

Julia von Sneidern got divorced in 1915. Two years later she married Axel von Sneidern, an agriculturalist and member of parliament. He ran the Berg estate in Dalsland between 1907 and 1922, at which point he was appointed governor of Älvsborg county. The couple had a daughter, named Margaret, who was born in 1917. They lived in Vänersborg where Julia von Sneidern continued her social activism in the county agency for care of the blind and the county temperance authority, as well as in local branches of the Red Cross and Fredrika-Bremer-Förbundet (association). Between 1922 and 1944 Julia von Sneidern was a member of the board of Statens uppfostringsanstalt för sinnesslöa flickor (state-run care facility for mentally challenged girls) in Vänersborg. She was also chair of Mödrahjälpsnämnden (maternal aid authority) in Älvsborg county council area from 1937 to 1941.

In 1938 Julia von Sneidern was awarded the Illis quorum medal of the eighth degree. During the Second World War, and during the last few years of her life, she was active on behalf of and gave up her home to Jewish refugees. 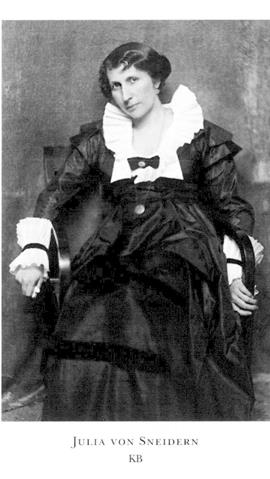