Karin Åhlin founded the Åhlin school. It became one of the largest girls’ schools in Stockholm during the 1800s.

Karin Åhlin was born in Stockholm in 1830. She was the daughter of Major Paul Pehr Åhlin and Gustafva Vilhelmina Norberg. She was the second eldest in a family of 13 children. In 1847, aged 17 years old, Karin Åhlin started to teach at her home in Kungsholmen in Stockholm. This was a small home-based school which initially catered for 14 children, including some of her own younger siblings. In all likelihood her younger sisters gradually began to teach as well. It was normal for schools to be based within private family homes at this time, but as Karin Åhlin’s enterprise expanded so the need for larger and more suitable premises became urgent. In 1867 the school moved into premises at Fredsgatan 19. Karin Åhlin initially taught geography and languages but by 1874 she ceased teaching in order to focus on running the school.

Karin Åhlin ran the Åhlin school very successfully. The enterprise expanded to include ‘small’ schools (comprising only the first two years of school) for girls and boys in 1877. Ten years later the school had to move once again, in order to cater for its almost 400 students, and its new premises were located at Malmskillnadsgatan 52. The school obtained ‘dimissionsrätt’ in 1894 which meant they were allowed to award qualifications based on school-leaving exams. The Åhlin school continued to expand during the 1890s and also began to run teacher-training courses.

The school’s teaching methodology has been described as highly traditional. Clamours for a more modern style of school-teaching began to ring out during the 1880s and the so-called ‘reform pedagogy’ gained public ground. Karin Åhlin was, however, no enthusiast of this reform and maintained her traditional approach to teaching. This resulted, amongst other things, in one of her teachers, Anna Sandström, leaving her teacher’s post at the school in order to set up her own school according to the new reformed pedagogical lines of teaching.

Despite this the Åhlin school enjoyed a good reputation and had no difficulty in attracting students or teachers to it. One of the latter included Ellen Fries, a former pupil who became the first Swedish woman to gain her doctorate, who then came to teach at the school. From 1891-1900 she served as the school’s principal and was succeeded by Lydia Wahlström. Pupils of the Åhlin school included the likes of Ellen Key, a pupil there from 1865-1866. The school remained active throughout Karin Åhlin’s lifetime and several of her sisters both taught at and lived in the school building.

Karin Åhlin was awarded the Illis quorum meruere labores medal in 1890 in recognition of the useful work she provided through the school. She remained the school’s director until her death at the age of 68 in 1899. She was succeeded as director by her niece, Hedda Åhlin, who had previously taught at the school.

Karin Åhlin died in Stockholm in 1899. She is buried at Norra begravningsplatsen (The Northern Cemetery) in Solna. 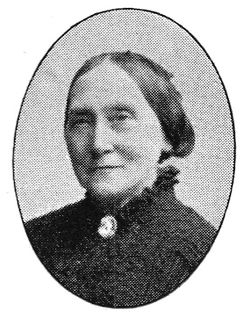