Lina Hjort was a teacher, business woman, building contractor and suffragette. She was mainly active in Kiruna during the first half of the 1900s.

Lina Hjort was born in 1881 in Hietaniemi parish in the northern Swedish province of Tornedalen, where she also grew up. Information about her early life can be found in her diaries that have been preserved in the Norrbotten Museum. In these, one can read that she was very insightful about herself and the psychological foundations for human survival. She was born on the side-lines, she wrote: unwanted and unloved. She was the ugly duckling who came into the world and was met with dissatisfaction and shame. In her diaries, she describes her love for her maternal grandmother, and that the best times in her childhood were spent with her.

The diaries also describe strong experiences from her childhood in which her grandmother was her only safe haven in life, despite desperate poverty. However, the diaries also describe the young girl’s boldness. When her grandmother went out begging, young Lina Hjort was allowed to accompany her. One day, they were called to the farmer with whom her maternal grandfather was lodged, taken care of by the person who asked least money to do so, like many other paupers. When Lina Hjort and her grandmother arrived at the farm, they found her grandfather murdered in the doorway. The farmer had beaten him to death with a big cudgel, and lice and fleas were crawling all over him as he lay there. Lina Hjort went straight up to the farmer and gave him a severe scolding — she thought it was shameful to treat old people in that way. She was only eight years old on that occasion.

Lina Hjort started work when very young, and acquired good physical condition and strength. She twisted wickerwork for timber rafts and collected wood, and was not afraid of hard work. She made herself a pair of birch-wood skis to be able to move around more easily in the forest to collect and chop wood. She trusted herself completely and was not afraid of anything. She was clever at school and dreamed about becoming a teacher herself. She needed money to realise her dream, however. She was able to borrow 30 kronor from her confirmation teacher. She also received a scholarship and was accepted by the teacher training college in Haparanda — despite not mastering Swedish very well. Her native language was of course Finnish. When she qualified as a teacher, her first teaching job in 1901 was in the hamlet of Kurravaara, with a salary of 450 kronor a year.

Kurravaara is situated about ten kilometres from Kiruna. Lina Hjort’s skiing skills were very useful, since she was able to ski as often as possible from the village to Kiruna. She never felt at home in Kurravaara. Nobody there wanted a teacher. Parents thought the school was completely unnecessary, a view that influenced the children who did not want to learn anything at all. Her lack of well-being in Kurravaara contributed to her fear of the dark and her conviction that the school building was haunted. The village councillor tried to explain to her that the building stood on a kind of unstable clay, so that was why there were so many noises there, but Lina Hjort did not believe him; she knew that evil powers were after her. She had had enough. On one visit to Kiruna, she went to the works director Hjalmar Lundbohm at the mining office and said: “I’m young and healthy and if I can’t get a job in Kiruna I can go somewhere else to earn my living”. To which the director responded: “You may count on having a job here”.

So at last she was able to move back to Kiruna, a town that was growing and that was full of people and life, in contrast to the solitary hamlet of Kurravaara. To Kiruna came Sweden’s entire Parnassus too, to visit Director Lundbohm and under his aegis to live free lives as artists enjoying the country air. Lundbohm was a patriarch who took good care of his workers; Christmas parties were organised for their children and in Kiruna the first tram in Sweden was running, for the workers to travel to their work in the mines. Lundbohm also took good care of the Sami culture.

Lina Hjort was energetic and ambitious. She wanted to build houses, and was given permission to use the company’s left-over bricks that had sunk down into the mud at the rubbish tip. Very painstakingly, she salvaged so many bricks that they sufficed for the foundations of a house. She used the company’s left-over timber for the rest of the building. In due course, she built several more houses and rented out rooms, mainly to schoolmistresses and other women.

There was a lot of happiness in Lina Hjort’s houses. She herself played the accordion and had bought a piano. According to her autobiographical notes, her friends and parties were numerous. Lina Hjort starting working politically at that time. A road between Kiruna and Nikkaloukta was an issue that she successfully engaged in. She also engaged in the suffrage struggle. One day on her way home from the school she was working at, she met Mrs Lind the doctor’s wife who started discussing with her all the injustices women suffered in society. Mrs Lind had understood that Lina Hjort with her great social engagement and sense of justice was a woman who could be counted on. Thus Lina Hjort acquired knowledge about the suffrage movement, about how women all over Sweden were working for women’s equal rights. Lina Hjort was no club person, but she took upon herself to go round the villages with lists. She went from farm to farm and talked about the suffrage struggle, and women signed on.

“In my view, both women and men were human beings with thoughts, understanding and will. I found it therefore infinitely unjust”, wrote Lina Hjort in her diary. In 1913, the local suffrage association, Föreningen för kvinnas politiska rösträtt, FKPR, had 150 active members. Lina Hjort’s home was an important gathering place for the suffragists’ meetings. She had contact with the leading lights in the movement, like Lydia Wahlström, Gulli Petrini and Frigga Carlberg. Lydia Wahlström was also one of the strongest voices for women’s freedom in love and sexuality, issues in which Lina Hjort was also very engaged.

Lina Hjort acquired a legitimate place for herself in the community through her political work and her engagement in the suffrage movement. She, who had been born on the side-lines, a beggar’s child, poorest of the poor, stood up straight and felt like the very respected citizen she was. Lina Hjort’s life has become a theatre play: My dreams grew wild, that was produced by Norrbottensteatern in Luleå. The première took place in Kiruna, in Lina Hjort’s house, still there and called Centrumhuset. Kiruna citizens recount that previously they used to be able to see Lina Hjort, old and bent, walking around outside her house, sweeping and shovelling snow. She had on an old grey overall and wanted to speak to absolutely nobody. She went her own way, following her own thoughts, as she always had done. In the Centrumhuset, still standing in Kiruna centre, lived Lina Hjort until her death in 1959. She lies buried in the Jukkasjärvi Cemetery. 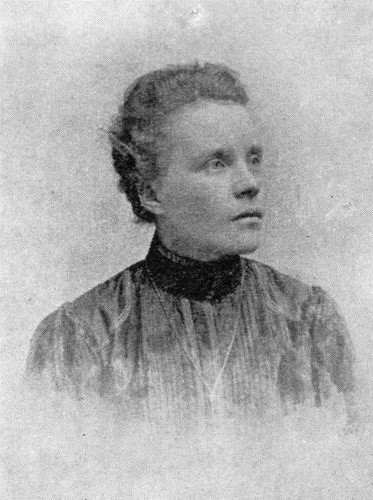