Maja Sjöström was a well-known textile artist during the early decades of the twentieth century. Her work includes the textile decorations at Stockholm City Hall.

Maja Sjöström was born in 1868. She was brought up at the bailiff’s farm of Södregård in Bårslöv, Scania. Her family suffered difficult financial conditions. Her father was burdened by the duty of providing for not just his wife and children, but as the eldest son in his own family he also cared for one of his sisters, and a nephew who had lost his own father at a young age, as well as caring for his father-in-law for a long time within his own home. Despite tight finances Maja Sjöström’s parents were able to create a safe childhood for their seven children.

The family were keenly interested in education and it was obvious that even the girls in the family would benefit. Despite great financial sacrifices to the family Maja Sjöström and her three sisters all attended Högre Elementarskolan för flickor (advanced school for girls) in Helsingborg. Maja Sjöström’s sisters eventually qualified as nurses at Sophiahemmet. She herself sought to develop her artistic talents instead. She had already developed a love for drawing and painting when she was a child.

In the autumn of 1886 Maja Sjöström found herself in Stockholm. What little financial support she received from home was not enough to live on but thanks to Amanda Eriksson, who was a clerk at Statistiska centralbyrån (the central bureau of statistics) and who took Maja Sjöström into her own home for several years, the latter could wholeheartedly devote herself to her studies at Högre konstindustriella skolan (advanced school of arts, crafts and design).

Maja Sjöström already became acquainted with Föreningen Handarbetets Vänner (friends of handicrafts society) during her time at Högre konstindustriella skolan and she had created much-appreciated designs for them. In 1893 the society took her on in fulltime employment and she very quickly became the society’s leading designer. It was not long before her career really took off. In 1896 the critics were in awe of her modern upholstery fabrics created for the Hallwyl family’s new palace. “One must admire the artist’s ability to achieve period colours in her works”, as was reported in the Dagens Nyheter. At the 1987 Stockholm exhibition she wove her Gripsholm tapestry in front of the public and several of her other pieces were favourably received and sold to both Swedish and foreign visitors.

In 1902 her collaboration with the architect Carl Westman resulted in Maja Sjöström supplying the textile decorations for the Pressen villa. She was also commissioned to produce a tapestry, upholstery fabric, and pile rugs for the professor of mathematics Gösta Mittag-Leffler’s world famous library. The pile rug, with its solar halo in the middle, mathematical symbols in the corners, as well as owl heads distributed along the edges, was lauded by the critics. Maja Sjöström also created several much-noted church textiles in the early 1900s. Her 1907 antependium for Storkyrkan in Stockholm is still (2017) in use when special celebrations call for a red colour. Her clerical vestments created for the Sofia church, also in Stockholm, caused conflict between the clergy and the Handarbetets Vänner artists. The theologians wanted to replace the shakefork which Maja Sjöström had used in her original sketch with a Latin cross “for religious reasons”. This came to pass even though the artistic committee of Handarbetets Vänner felt that this diminished the artistic value of the work.

Maja Sjöström’s first study trip to Europe, which she made in 1900, on which the Paris World’s Fair was the destination, established her lifelong love affair with Italy. The World’s Fair also served as somewhat of an international breakthrough for her. The museums were competing to acquire her modern tapestries which she created with bright blue and green on a white background. In 1901 some of her pieces were exhibited at La Maison de l’Art Nouveau, Siegfried Bing’s prestigious art shop in Paris which subsequently gave its name to the whole concept of art nouveau.

Handarbetets Vänner published a catalogue to the Stockholm exhibition which reveals that Maja Sjöström was by far the most productive textile artist of the day. She alone was responsible for a third of the exhibited items and was represented by pile and backstrap woven rugs, linen tapestries, portières, silk tablecloths, piano-covers, and a large amount of upholstery fabrics. Her blue tapestry called Ödet, woven in the so-called Handarbetets Vänner style which was a simpler and cheaper form of tapestry-weaving invented by Maja Sjöström av Carin Wästberg in 1903, was purchased by the Kunstindustrimuseum in Oslo. One of Maja Sjöström’s early pieces using the Handarbetets Vänner-technique was a rug woven in 1904 which can be seen at one of the most eminent American art museums, The Art Institute of Chicago. Maja Sjöström became the first member of Handarbetets Vänner to be represented in Swedish state collections when the National museum acquired the tapestry called Höst following the Baltic exhibition of 1914.

In 1915 Maja Sjöström created upholstery fabric and a rug for Carl Westman’s new town hall and in 1916 she was commissioned to undertake the job which made her world famous: namely the interior decorations of Stockholm’s City Hall. Maja Sjöström was responsible for every piece of textile décor, from the haircloth used in office room furniture to the function hall’s enormous silk tapestries.

Maja Sjöström’s incredibly complicated cloths – in terms of the weaving-technique required to create them – could not in general be produced in Sweden. Only one silk cloth was woven at the Almgren silk factory in Stockholm. Maja Sjöström spent two years in Venice at the Bevilacqua silk-weavers where her tapestry called Festens genier (Angeli) and embroidered silk cloths Hind och Örn (Cervo e Aquila), and Påfåglar (Pavoni) were created under her guidance. Her famous Sopra-Rizzo-Veneziano work – which for nearly 100 years was erroneously accredited to the Italian artist Guido Cadorin – was created for the Tre kronor room at the City Hall.

Following the inauguration of Stockholm City Hall on Midsummer’s Eve in 1923 Maja Sjöström moved to Rome. There she, in a rather calmer and somewhat smaller scale, carried on her creative output in a simple but beloved studio where she also spent the last 37 years of her life living. During the 1920s and 1930s she devoted herself to creating items for Blå Boden, an import and retail company she had founded in order to trade in high-class Italian artwork. She had been inspired to set up the company during her own shopping trips in Italy. Her sisters Alma, Sofia, and Mathilda – who were all at that time late middle-aged women who were tired after years of working in hospitals and medical centres – were quick to accept the challenge of setting up their own business which they ran in Råå. Initially the company, which existed from 1921–1939, was extremely successful. However, in 1939 things came to an end. Many of their clients had lost money in the Kreuger Crash and the breakthrough of Functionalism during the Stockholm exhibition led to a change in the public’s artistic taste.

During and after the Second World War Maja Sjöström lived in great poverty in her bomb-damaged studio. She was also miserable after being ostracised from the Scandinavian community due to her political views. She never abandoned her belief in Mussolini. Her last known artwork is a sketch for a rug intended for the American Swedish Historical Museum in Wilmington, USA. The rug was never produced due to the war.

Maja Sjöström’s designs became rediscovered during the 2000s. Clothes based on her 1920s drawings were sold in exclusive Italian fashion shops and the Hayward company of New York created expensive bags bearing the peacock design which had originally been designed by Maja Sjöström for upholstery fabric used in the Stockholm City Hall.

Maja Sjöström died in Hamburg on 31 October 1961, as she was travelling from Råå to Rome. At that time she had become a forgotten figure. Posthumously her reputation was re-evaluated and major tributes were made in her honour. Art critics compared her to Jean Eric Rehn of the 1700s. It was also said of her that she had introduced impressionism into the art of embroidery. One of her obituaries states: “Maja Sjöström has died, Maja Sjöström responsible for the most magnificent achievements ever in the history of Swedish textiles.” 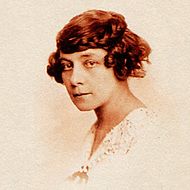