Maria Gustava Gyllenstierna was a learned woman of the early eighteenth century. She was active as a translator and a poet.

Maria Gustava Gyllenstierna was the daughter of the royal councillor and chief governor Christoffer Gyllenstierna and Gustaviana Juliana Oxenstierna. In 1693 she married Count Carl Bonde and thereby was able to accompany him on his duties in various countries, including Holland and England. The couple had several children together, two of whom survived into adulthood. After Carl Bonde’s death in December 1699 Maria Gustava Gyllenstierna established herself at Tyresö castle, which she had inherited from her maternal grandmother. Her grandmother, Maria Sophie De la Gardie, the sister of Magnus Gabriel De la Gardie, had been an unusually enterprising woman and Maria Gustava Gyllenstierna apparently inherited some of her energy. This emerges in her surviving letters, along with her diligent efforts at literary creativity and authorship.

Countess Maria Gustava Gyllenstierna’s most noteworthy contribution was in her translation work. She produced a Swedish version of Josephus’ Jewish History from a French translation. The first volume of five, Flavii Josephi Judiske Historia utaf Arnold d’Andilli Fransyska uttolkning På Swenska Öfwersatt, was printed in 1713. It included a number of dedications bound together and an important introduction for the reader. 1713 can be viewed as an important year for Swedish-language literature. It was the year not only of Gyllenstierna’s translation but also of Sophia Elisabet Brenner’s Poetiske Dikter, along with a new chancellery statute which emphasized the significance of a pure, rich and proper Swedish language. Both Gyllenstierna and Brenner express their linguistically patriotic ambitions in their introductions, in accordance with this statute. It was imperative to “avoid all foreign words”, Gyllenstierna wrote, thereby borrowing directly from the new statute in which the king had ordered that “one should strive toward a Swedish that was pure and clear whilst also avoiding foreign words as far as possible”.

Josephus’ work of history from the first century CE had been translated into French by Arnauld d’Andilly and printed in five volumes between 1673 and 1676. Maria Gustava Gyllenstierna’s great ambition as a translator is reflected in the production process. The introduction reveals that she had “a wise man” to help her, who not only proofed her work but also compared it against the original Greek. His notes can be found in the margins of the first volume and in more detailed footnotes in the second. Maria Gustava Gyllenstierna did not live to see them. The second volume was not printed until 1747, ten years after her death, and the final volume was only printed in 1752.

It is unknown just what inspired Maria Gustava Gyllenstierna to undertake this major linguistic effort. Perhaps she saw it as a means of “serving her fatherland”, as had frequently been articulated in the preceding decades. It certainly was, in hope of support and protection, a token of her obedience to the royal family, whose members she apostrophized in verse in the first volume. The concluding prayer addressed to Karl XII also supports this view: “Mig och mina nådigst hägna/ med Ehr nåd och Ehrt förswar; / Med Gunst/ Godhet/ Stedze fägna/ som en nådig Landsens Far.” (“Graciously surround me and mine / with your favour and protection; / With Grace / Goodness/ Constantly Delight us / As a gracious father of our country.”) In the Swedish text the translator’s name, which does not appear on the title page, is secreted here amongst the letters in bold.

The journey toward printing the first volume of the set was expensive and it was necessary to seek her superior’s favour and benevolence. In a letter to the king Maria Gustava Gyllenstierna requested permission to sell a few copies to every church in Sweden and Finland. This was rejected – “the churches cannot be burdened with paying for any copies of this work” – along with a renewed subsidy for the work. However, the translator was awarded the “free” gains from the work for ten years.

The translator’s literary ambitions or desire to be seen publically as a female author should not be overlooked. These elements are emphasized by Sophia Elisabet Brenner in a congratulatory poem which lauds Countess Maria Gustava Gyllenstierna for her language which is “so clear, neat, pure”. Brenner, the esteemed poet, who became known for giving women a voice in her own poetry, also uses the occasion to pronounce her opinion in the controversial question of whether the soul was the same in women as it was in men. Those who were envious might have thought it doubtful that a woman could have enough light and power in her soul that she could produce things “which come to be printed”. However, Mrs Brenner states, the soul “does not recognize gender, it is neither she nor he”, which Countess Gyllenstierna also seems to have shown. Further, it is asserted that she has done those readers inexperienced in foreign languages a favour. This translation was seemingly viewed as a service to her fellow sisters. It was not unusual for female translators to describe their work in this way.

Maria Gustava Gyllenstierna became part of the tradition of women who wrote religious literature. She composed a wide-ranging series of sonnets on Jesus’ work toward atonement and she translated work by the Norwegian psalm composer Dorothe Engelbretsdatter. Her name as the translator does not appear here either but Tåre-Offer, which was printed in 1727, states in the title that it is På Swenska Rim Af en förnäm Fru öfwersatt (“translated into Swedish rhyme by a noble woman”). The foreword states, “and as I found great edification in reading this short tract / I for my own heart’s pleasure have translated it into Swedish verse”, whilst also asking the reader to forbear anything in the text which may go “against the quality and character of Swedish skaldic poetry” – here too the Swedish language is being heeded!

From the Personalia attached to the printed eulogy, as was the norm at the time, it is clear that Maria Gustava Gyllenstierna diligently read books in many languages and that was how she formed opinions and gained knowledge “which could just as easily have honoured a man”. Some of what she wrote had also been published. “She showed by example that men are not the only ones who can enlarge their knowledge through books and make good use of them”. A long poem on the funeral of Karl XII on 26 February 1719 is included among the surviving manuscripts, along with a “delightful sonnet” on the return of Fredrik I on 13 November 1731 “from his fatherland”, as well as 600 sonnets encouraging the reader to meditate on Jesus’ life, suffering and death. This too was a masterpiece.

When Sophia Elisabet Brenner died in 1730 Maria Gustava Gyllenstierna composed a sonnet in her memory, an affectionate account which broke with convention of occasional poetry where written tributes to those in lower positions of social hierarchy were rarely expressed. This poem is printed in Brenner’s posthumous collection Poetiske Dikter, 1732.

Maria Gustava Gyllenstierna died at Tyresö castle in 1737. After her death she was eulogized by Olof Dalin, amongst others. His text is included in Jacob Strengbom’s funeral sermon. 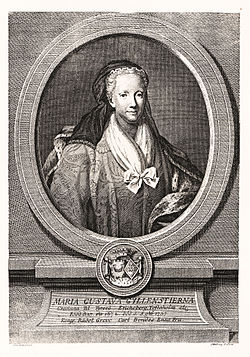