Marita Lindgren-Fridell was a versatile and unconventional art expert who was also a writer and an exhibition organiser. She was particularly important in Sweden as a public educator. She wrote the first major work on Swedish art education and is considered to be a pioneer of this field in Sweden.

Marita Lindgren-Fridell was born in Västerås in 1910. She was the daughter of Göte Lindgren, an engineer, and Anna Lindgren née Pettersson. She began to study art history at Uppsala university and, in 1929, she became an assistant in the university’s department of art history, where Professor Gregor Paulsson was one of her colleagues. One of the outcomes of her time there was her role as the illustration editor for the publication Konstens världshistoria, 1942–1952, as well as her role in the research project entitled Svensk stad, of which several volumes were published during the 1950–1953 period.

Marita Lindgren-Fridell wrote her licentiate on Jesse rot: en ikonografisk studie, which she presented in 1936. She went on to undertake doctoral studies, going on several foreign trips in order to continue her research into the iconography of the Jesse tree. Marita Lindgren-Fridell never actually gained her doctorate as she left academia in the early 1940s. Her efforts within art history continued, however, within a non-academic forum until 1974, when she finally gained an honorary doctorate at Uppsala university department of art history.

Marita Lindgren-Fridell specialised in medieval church art and textile art, but she was also interested in art education and its related forms of instrution. She was an active writer, cultural journalist, organiser, and lecturer. In particular she wrote about medieval iconography and returned to her initial focus, the Jesse tree, as late as in 1979 in an article entitled “Jesse rot på Läckö: kring några målningsfragment” which was published in the 1979/1980 edition of the Västergötlands fornminnesförenings tidskrift journal. She also wrote about nineteenth-century impressionism, work opportunities for female artists, and textile art and the culture of interior decoration. Marita Lindgren-Fridell was also a scriptwriter who, along with Thorsten Eklann, produced a film script for Prins Gustaf in 1944.

By the 1940s Marita Lindgren-Fridell had already become an influential individual within the world of art education. As an art teacher and public educator she was heavily influenced by the British art historian and literary critic Herbert Read and his ideology regarding art in education as well as his views on children’s creativity. Marita Lindgren-Fridell was inspired by his book The meaning of art, published in 1931, and she was responsible for introducing Read’s 1943 book Education through art to Sweden. The latter was published in Swedish in 1956 entitled Uppfostran genom konsten. Further to Read’s theory Marita Lindgren-Fridell focused on the interests of children’s education – how children responded to art, children’s own creativity, and the importance of the tactile senses. She thus worked to distinguish children’s art education from that of adults.

As an expert in the field Marita Lindgren-Fridell was an active member of the 1948 enquiry into art education which led to the publication Konstbildning i Sverige: förslag till åtgärder för att främja svensk estetisk fostran, SOU, 1956:13. She also was the sole investigator on the enquiry into advanced art education which was presented in Högskolor för konstnärlig utbildning: betänkande, SOU 1970:66. Further she served as an expert on the 1957 schools committee and on the high schools inquiry into the arts as school subjects in 1960, an advisor to the 1957 års skolberedning 6 Grundskolan: betänkande, SOU 1961:30, and to 1960 års gymnasieutredning 4 Ett nytt gymnasium SOU 1963: 42.

Marita Lindgren-Fridell was one of the pioneering members of Konstfrämjandet (an organisation which promoted art) which was set up in 1947. She was particularly involved in Föreningen Konst i Skolan (the association for art in schools) which was established that same year. She was the association’s curator and from 1951 onwards its director. When the experimental enterprise within Riksutställningar (national exhibitions) was started in 1967 Föreningen Konst i Skolan became involved, covering the schools section within Riksutställningar until 1976, with Marita Lindgren-Fridell as the head of that section. Here she was responsible for the experimental and influential touring exhibition called Upptäcka, uppleva which travelled throughout Sweden during the second half of the 1960s right up until 1974. This was considered to be a ground-breaking aspect of art education for children and youth – and in how children should feel participant in the exhibition which, amongst other things included an activities room for creative expression.

Marita Lindgren-Fridell created a series of art education exhibitions as well as school television programmes, and she led numerous study groups and courses. For example, in 1950 she held the Konstnären och verkligheten exhibition at Gripsholm castle, on behalf of Konstfrämjandet. Marita Lindgren-Fridell was the first curator of Uplands konstförening (art association), established in 1933, and she proved to be a go-getter who actively tried to connect with new groups and worked with touring exhibitions and many art education projects.

Marita Lindgren-Fridell shared her interest in collecting art with her husband Allan Fridell. She died, aged 87, in 1997 and she is buried at Berthåga cemetery in Uppsala. 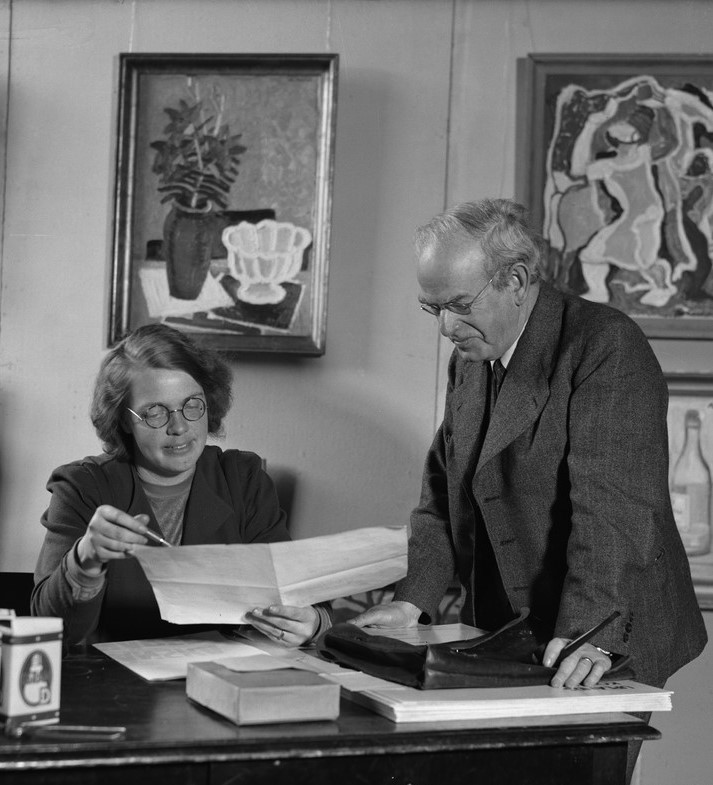