Mollie Faustman was a modernist artist and a multifaceted author and journalist. During the 1920s and 1930s she became famous for her cartoon series about Tuttan and Putte in Dagens Nyheter which was popular with the general public.

Mollie Faustman was born in Stockholm in 1883. She came from a solidly bourgeois background. Mollie Faustman’s father was Edvard Faustman, the illegitimate son of Lars Johan Hierta who had founded Aftonbladet. Her mother was Wendela Hebbe, the first Swedish female journalist. Edvard had been born abroad and abandoned with foster parents in Berlin, who gave him his surname Faustman. Edvard Faustman had trained as an engineer and then married Alma Karsten, also an illegitimate child. Her father was the affluent Stockholm baker Anders Wilhelm Karsten. Mollie Faustman was the second of three daughters. For a few years in the late 1880s she and her family lived in London, but after two years Mollie’s mother decided to return to Stockholm with her daughters. In Stockholm the now single mother found herself in economic difficulty receiving financial aid from her father. Thus Mollie Faustman found herself in between social strata. Although she came from a bourgeois background she was marginalised not only due to her gender but also due to her social situation as a child of divorce who was dependent on the goodwill and contributions of relatives.

Mollie Faustman is an illustrative example of how women in the early twentieth century used the opportunity of leaving home and the private sphere to step into public life. That this did not happen without a struggle and hard work is revealed in her original memoirs entitled Då, published in 1958, which recounts her childhood and upbringing. Both of her parents were unsupportive of her artistic ambitions. Nevertheless, Mollie Faustman was able to take advantage of the improved opportunities for women to educate themselves at the time. She graduated from school in 1901, and then attended Gothenburg museum’s drawing and painting school (Valand) from 1905 to 1911. She spent intermittent periods from 1908 to 1911 in Paris studying painting, including at Henri Matisse’s school.

Mollie Faustman began to write at an early age. Her first texts were already being published in the early 1900s, but usually under a pseudonym. Around 30 titles were accredited to her own name, the first of which was a picture book called Malins midsommar published in 1910. The book tells a rather traditional story but the images are typical of modernist expression. During the 1930s Mollie Faustman published two books for young adults, Renées dagbok, 1937 and Renées första plats, 1938. Renée is a child of divorce and considerable elements of the story resemble Mollie Faustman’s own life. The contents of the Renée books differ notably from the majority of the books for youth written at the time. Both the themes of children of divorced parents and that of absent fathers were unusual in literature for children and youth at that time. This is also true of the social issues raised in the books, such as the views on Jews in Nazi Germany at the time.

Mollie Faustman was also a much appreciated writer of causerie-style articles which appeared in Dagens Nyheter and Idun under the pseudonym Vagabonde. These articles, which gave her a large readership, were also released in book format. In total 14 collections of her articles were published. Her ironic style of straightforward and unsentimental expression was much acclaimed by reviewers. The articles had a wide range of topics, although some were reoccuring such as husbands and marriage, school and raising children. Her children, Tuttan and Hampe, played a central role in the articles. Mollie Faustman was also one of the first female cartoonists in Sweden. Her much-loved series in Dagens Nyheter on the lives of two children, Tuttan and Putte, cleverly captured snapshots of a child’s everyday life. These were contemporary portrayals of a child’s conflicts with the adult world and everything in between. The children were the focus and the simplified and stylised drawings depicted the children as they moved and ran. The cartoons were eventually released in book format in two volumes, first in 1926 and then in 1934.

Mollie Faustman’s collected work has a distinct thematic unity. Both her writings and her drawings portray women and children. She always supported society’s underdogs and was highly aware of what she viewed as oppression, haughtiness and high-handedness.

It was, however, painting that was the most important form of expression for Mollie Faustman. “I make a point of being an artist”, she said. Mollie Faustman’s first solo exhibition was at Konstnärshuset in 1931, and her last retrospective exhibition was in Sveagalleriet in 1964. She often exhibited with other artists. Her debut was in 1909 when she exhibited in the Hallin art shop in Stockholm along with three male friends from Valand. Mollie Faustman was one of the early modernists. She was considered to be a fresh but somewhat harsh painter; also the authenticity of her art has been emphasized. She followed her own path and avoided trends, particularly clichés and stereotypes. Like other modernists she had an affinity to children and emphasised the genuine nature of children. She was one of the first to dismantle the image of the sweet innocent child. Her depictions of children are not those of beautified poses but rather serious, glum, thoughtful expressions, beyond blithe smiles. Along with Vera Nilsson Mollie Faustman is considered to be one of the eminent painters of children of her time.

Mollie Faustman spent most of her life writing books for children, painting, holding exhibitions and writing for the daily press and for journals. Mollie Faustman made the movements and changes which are usually taken as signs of modernity her own. She was vocal in the public discussions of her time, engaging in debates and expressing her opinion both in words and in images. For example, she attacked the notorious gossip magazine Fäderneslandet and contributed to getting it closed down. She was a significant former of public opinion. She made her voice heard and she was listened to.

Mollie Faustman died in 1966 and is buried at The Woodland Cemetery in Stockholm. 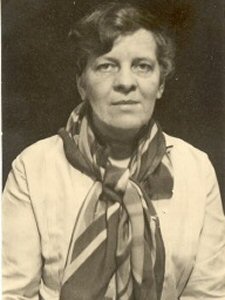