Rosa Carlén was an author who wrote novels under the pseudonym “Förf. Till Agnes Tell” (author of Agnes Tell).

Rosa Carlén was born in 1836 while her parents were still engaged. Her mother was the well-known author Emilie Flygare-Carlén and her father was the lawyer Jacob Reinhold Dalin. The death of her father six months before her birth, resulted in Rosa being given up for adoption by her mother. A childless couple, the landlord Jonas Bågenholm and his wife Andriette Charlotte Ekelund who were relatives of the late Jacob, adopted Rosa under the name of Reinberg. Bågenholm and his wife lived on Onsön farm in Dals-Ed in Dalsland. Rosa’s mother funded her daughter’s education in Åmål and during the years 1853-1855 Rosa lived with her mother in Stockholm. In 1856 Rosa married the lawyer and parliamentarian Rickhard Carlén, a younger brother of her mother’s husband Johan Gabriel Carlén. After Rickhard Carlén’s death in 1873 Rosa stopped writing and returned to her home town in Dalsland, where she died in 1883.

Rosa Carlén’s first book was the novel Agnes Tell, 1861. As well as her first book, Heléne, 1863, and Tre år och tre dagar, 1864, can be described as novels portraying married life. Some of Rosa’s later works, such as Tatarnes son, 1866, and the collection of short stories Lifvet på landet, 1866, can be described as countryside stories with a social message. Rosa became most well-known for her novel Bröllopet i Bränna: en brottshistoria, 1863, which was turned into a film in 1926 by Erik A. Petschler.

According to contemporary sources Rosa Carlén disassociated herself from her mother Emilie Flygare-Carlén’s writings. In contrast to her mother, Rosa did not publish under her own name but used the pseudonym “author of Agnes Tell”, apart from her last novel Cornelius, hans fränder och vänner, which was published under the name T. S. The modern reader can see clear similarities between the writings of mother and daughter. They both wrote family-based novels using long prose passages clearly rooted in traditional Swedish culture. Like her mother’s best-known work, Rosen på Tistelön, 1842, Rosa Carlén’s most noted novel Bröllopet i Bränna is based on a true crime story and family tragedy from the countryside. However, Rosa Carlén’s books portray a different geographical environment from her mother’s work. Emilie Flygare-Carlén became known as a writer of stories located on the west-coast of Sweden, whereas Rosa Carlén used Dalsland and its farmers and agricultural landscape as the background for her books.

In her time Rosa Carlén was favourably received and was considered to be a promising young author. The majority of her books were translated into Danish and German. Her career as an author was, however, a short one. In an eleven-year period, from 1861 to 1873, she published a total of eight books, comprising seven novels and one collection of short stories. 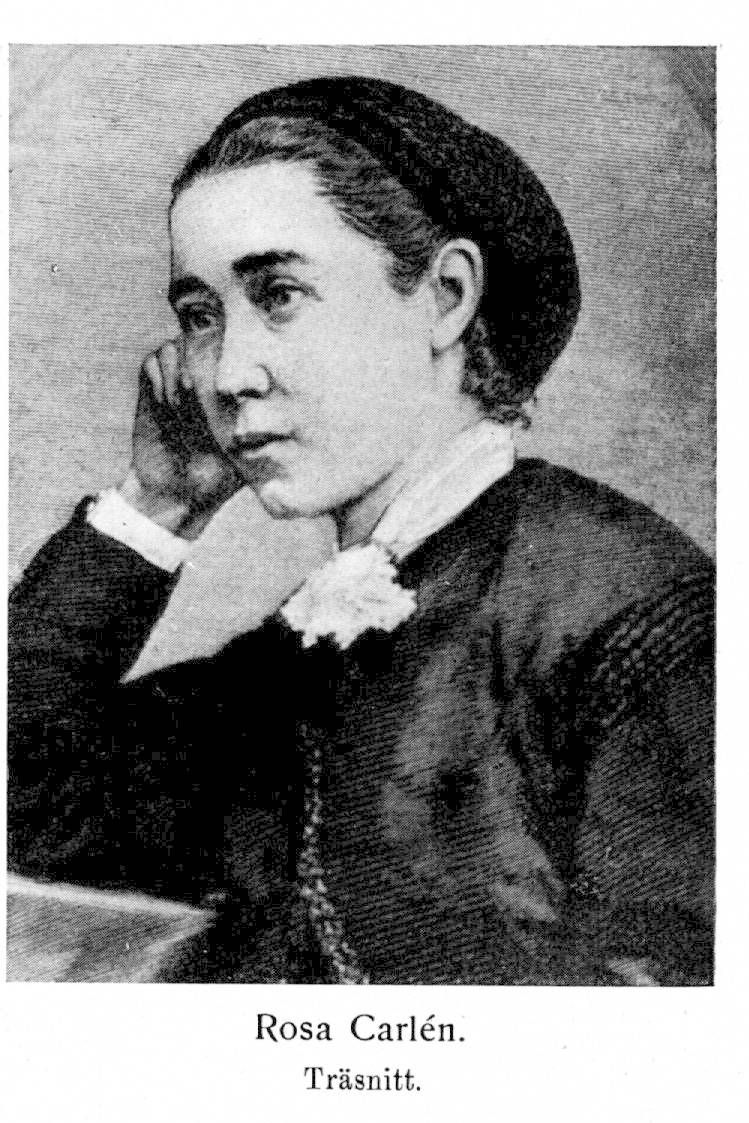