Sigrid Kahle was a cultural celebrity, a journalist, and an author. Sigrid Kahle was able to travel and immerse herself in different cultures thanks to her husband’s diplomatic postings to Asia and Northern Africa. She was a global citizen and she shared her experiences through a variety of articles and books.

Sigrid Kahle was born in Paris in 1928. Her family was resident in the French capital for a time because her father was studying there. Both of her parents, Fanny Hasselberg and Henrik Samuel Nyberg, came from clerical backgrounds where education was highly valued. Her mother was a trained public school teacher who ran the home and the family whilst her father furthered his academic career. Sigrid Kahle was her parents’ second child; she had two siblings, in addition to the twin brothers who died in infancy.

Sigrid Kahle grew up within the Uppsala academic environment, albeit in relatively straightened financial circumstances. Her open-hearted and deeply questioning memoires depict her childhood, school years, and her youth at a time when the Second World War was looming. She rediscovers Uppsala through her childhood eyes, as well as its social limitations. However, her memoires also lovingly portray how her mother toiled and struggled to keep the family together whilst being sidelined by her successful father’s more publicly-focused life. All the while her mother was in poor health and eventually died when Sigrid Kahle was still a young girl.

Sigrid Kahle developed an interest in the theatre at a young age and so, whilst still a young girl, she travelled to Stockholm as soon as she could in order to take in one show after another. She also dreamt of becoming an actor from an early age. Sigrid Kahle was, however, considered to be overweight and was not accepted into acting school. After gaining her school-leaving certificate she attended university, where she deepened her knowledge of the history of theatre. She was also a driving force in amateur productions put on by the students.

A journey to London which she made with her father – who was a professor of Semitic languages at Uppsala at the time – came to have a decisive impact on Sigrid Kahle’s life. Whilst in the British capital they stayed with one of her father’s colleagues, the world-renowned Orientalist Paul Kahle, who had fled Germany with his family in the late 1930s. The Kahle family included five sons and one of them – John – later became Sigrid’s husband. After she returned to Sweden from London she and John Kahle began corresponding. He eventually moved to Bonn where he began his diplomatic training. Upon graduating he and Sigrid Kahle got married.

John Kahle’s first diplomatic posting was to Karachi. Sigrid accompanied him on his travels across Pakistan, India, and Afghanistan. They visited sites of historic interest as yet unfamiliar to most Europeans in the 1950s. Nowadays many of these places are connected to war and destruction. Sigrid Kahle wrote about her experiences which were published as articles in the Swedish press.

As a diplomat’s wife Sigrid Kahle’s role was to support her husband in his work in every way possible. She hosted dinners and fulfilled other representative duties. Gradually Sigrid Kahle became acquainted with and friendly with many of the leading political figures across the globe. Her memoires portray her struggle between performing her formal duties and trying to find the time to write. She was particularly active in Karachi in her role as a diplomat’s wife and she formed many local connections in that city. There she was also able to indulge her long-standing interest in the theatre. She established a theatre school and a theatrical group which performed works by Molière and other Western playwrights. These productions were performed in the native Urdu language and the actors were all locals. These Karachi productions generated attention which echoed around the world for many years to come.

Following their stint in Karachi the Kahle couple spent several years in Baghdad. As before they travelled widely and Sigrid Kahle supplied the Swedish public with her impressions of the various places they visited. She viewed travelling as the university of life and took the opportunity of learning several languages. They maintained a base in Germany where they resided for a lengthy period during the 1960s. Indeed, Sigrid Kahle served, in practise, as the German correspondent for the Svenska Dagbladet newspaper. John Kahle was later awarded a stipend towards studies at Harvard and Sigrid Kahle described the year that they spent in the USA as their best for a long time. She had time to herself there, an opportunity to study, and was on the spot for the student rebellions. Just like her father, Sigrid Kahle became a respected expert on Islam in her own right.

Following their year in the USA, John Kahle was sent to New Delhi and the whole family moved there. The couple, who were already familiar with Asia, quickly made themselves at home. Their two children – a daughter and a son who were only separated by 15 months in age – did not always view their itinerant childhood as agreeable. Sigrid Kahle’s memoires describe her worries about her children as well as her husband’s authoritarian behaviour. She often reflected on her marriage and how she would have lived life on her own. Her writing increasingly took up her time whilst she lived in the USA. Her friend Olof Lagercrantz provided a lot of help and support in this although she considered him to be a careerist.

In 1974 she suffered the deep loss of her father to accidental drowning. Sigrid Kahle had shared interests in history, religion, and linguistics with her father and they were deeply bonded. One of the highlights of her life had been his visit to Karachi, during which they two of them travelled around together and visited places which had previously been part of the Mesopotamian civilization. Sigrid Kahle wrote a biography of her father and his scientific activities based on his surviving archives.

Sigrid Kahle wrote a learned foreword to Edward Said’s book Orientalism when it came out in Swedish. She placed Swedish visits to the Orient and studies of Semitic languages into a different context from Said’s. This foreword can be seen as a defence of Western Oriental studies, especially of her father’s life’s work. However, she also recognised the importance of Said’s book: “In this book Orientalism Edward Said has powerfully scolded us …”.

Following a period in Asia John Kahle was posted to Northern Africa, initially to Sudan where Sigrid Kahle got to experience Darfur before the impact of the civil war. As always, the couple travelled extensively and in her memoires Sigrid Kahle recounts people they met, friends they made, difficulties they endured, and attractive locations they visited whilst also giving “the Other” a voice. Her memoires form a crowded mosaic of a lost time and the multi-faceted aspect of human life.

Despite all the lengthy and varied overseas postings Sigrid Kahle retained her Swedish ties. The Kahle family would rent different summer cottages during the holidays. After purchasing Utmyrby estate near Enköping they finally had a permanent place to return to. Indeed, upon her husband’s retirement the couple moved to Uppsala, where John Kahle died in 2003. Sigrid Kahle generated some consternation when she, then 82 years old, initiated a relationshiop with the author Carl-Göran Ekerwald, who was 87 at the time. They spent three years together, and Sigrid Kahle thanked Ekerwald in an afterword to part two of her memoires for enabling the book to be written. She also wrote: “There is no-one who I have missed more during my writing than my late husband, John Kahle […] Everything I have written about in this book I experienced with him at my side.”

Sigrid Kahle died in Uppsala on New Year’s Eve in 2013. She is buried in the family grave at the Gamla cemetery in Uppsala. 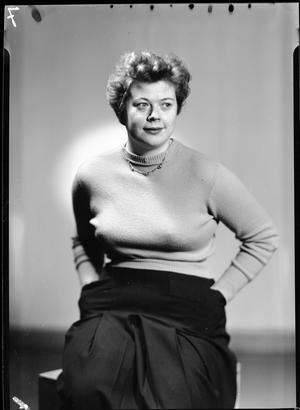