Siri Derkert was an artist and a modernist pioneer. She was one of the most important Swedish artists of the 20th century.

Siri Derkert was born in Stockholm and grew both there and in Norrköping. She was the daughter of Edvard Derkert, a businessman, and Valborg Derkert, a seamstress. She had six siblings and the family enjoyed a comfortable lifestyle.

As a child Siri Derkert spent a few years at the Whitlock co-educational school in Stockholm. She began her artistic training in 1904 at the Althin school for painting, which she attended until 1910. She then enrolled at Kungliga Konsthögskolan (Royal Institute of Art) in 1911. This was a conservative school where women and men were taught according to different methods. Siri Derkert was upset that the female students were not allowed to draw naked male models and so she initiated a student protest.

Having completed her education at Konsthögskolan Siri Derkert travelled to Paris in 1913 where she hired a studio in Montparnasse, close to her friends and fellow artists [] (Ninnan Santesson) and Lisa Bergstrand. They invited her to join their Nordic artists’ network within the Parisian artists’ society. While in Paris she attended private schools, the Académie russe, and the Academie de la Grande Chaumière.

Siri Derkert travelled to Algeria in 1914, along with Ninnan Santesson and Lisa Bergstrand. There she painted several important pieces. Unfortunately she lost a few them when she was robbed on her way home. That same year she began a relationship with the artist Valle Rosenberg, who was a Finnish-Swede. They spent the spring in Paris, living the life of Parisian artists. During the summer they visited Siri Derkert’s sister in England. Upon the outbreak of the First World War the couple travelled to Sweden. During the autumn of 1914 Siri Derkert fell pregnant and she kept this a secret from her parents. From the spring of 1915 Siri Derkert and Valle lived in Sicily and their son, Carlo, was born in Naples in July. Their time in Italy was intensely productive for Siri Derkert’s artistic production. She introduced a modernist style influenced by Cubism into her painting, mainly using greys, blues, and greens. She created several important pieces, mainly landscape paintings and self-portraits.

Due to financial problems Siri Derkert returned to Stockholm in the spring of 1916. Valle Rosenberg and their son remained in Italy. Their plans for her to organise a combined exhibition displaying both their works never materialised. Siri Derkert later exhibited her Cubist paintings made in Sicily in a group display entitled Den fri udstilling held in Copenhagen in 1919, and at the April 1921 exhibition at Liljevalch art gallery in Stockholm.

Back in Stockholm Siri Derkert joined the social circle of the Tennis pavilion at Gärdet, where several artists were living in a kind of collective. One of them was her friend Anna Petrus-Lyttkens. Along with Siri Derkert’s sister, Sonja Derkert, and Märta Kuylenstierna, they put on a dance display at Intiman in May 1917. They had designed the clothes they wore, and these were sewn at the Birgittaskola fashion studio. Valle Rosenberg was also involved, even though he was still in Italy. Elisabeth Glantzberg, the owner of Birgittaskola, hired Siri Derkert shortly afterwards to design clothes for two collections per year. These designs have survived in the form of about 30 known fashion drawings and photographs of dresses, but no material examples of the clothes have survived. These items were largely haut couture dresses, which were intended as evening wear and were only to be made in a limited number of copies. These clothes mostly followed the existing fashion, but aesthetically can also be related to Siri Derkert’s artistry. The clothes she created were both elegant as well as original and unpredictable. It was no coincidence that Siri Derkert, with her adoption of the Cubist idiom during the 1910s, became a fashion designer. Several of her modernist artist contemporaries also found artistic expression as clothes designers at this time. These clothes all originate from within the three central concepts of modernism: time, space, and movement. They emerged from the idea that they were images which were worn on the body and which moved through time and space.

Siri Derkert met the artist Bertil Lybeck during the summer of 1917. She fell pregnant to him, and their daughter Liv was born in April 1918. Like her half-brother, she was born in secret in Copenhagen. She was taken in by a children’s home and then later fostered. Siri Derkert only saw Valle Rosenberg again briefly in November 1919 when he was travelling from Italy to Finland via Stockholm. He was seriously ill and died in Finland a few weeks after he arrived. Their son Carlo remained in Italy.

Siri Derkert had a second daughter with Bertil Lybeck in 1920. She was named Sara and was born in Copenhagen, yet again in secret. She was taken in by the same foster family who cared for her older sister Liv. Siri Derkert’s relationship with Bertil Lybeck ended shortly thereafter, but they nevertheless entered into a pro forma marriage in 1921. This legitimised their two daughters, which was very important to Siri Derkert.

During 1920 Siri Derkert spent some time living in Paris and then spent the following years commuting between Stockholm and Paris on several occasions at the expense of the Birgittaskola fashion studio. From 1922 she also made trips which were funded by the journal Idun. She had her children with her as often as possible. When she was in Stockholm the girls stayed with their foster-mother in Denmark. Siri Derkert went to fetch her son Carlo out of Italy in 1921 but it took a few years before he finally came to Sweden.

Siri Derkert’s work for Birgittaskola formally ended in 1921. She continued her work in the fashion world for a few more years, including as fashion correspondent for Idun. From 1923 to 1924 she drew fashion drawings for Bonniers Veckotidning at the request of Célie Brunius.

Towards the end of the 1920s Siri Derkert painted miniatures which were displayed at Gummeson art gallery in Stockholm and at the 1930 Stockholm exhibition. She held her first solo exhibition at the Swedish-French art gallery in Stockholm in 1923. During the early 1930s Siri Derkert socialised, painted, and travelled together with fellow artists and friends Ninnan Santesson, Vera Nilsson, and Anna Sahlström.

In 1936 and 1937 Siri Derkert and her daughter Liv lived in Paris, where they both attended art school. Her daughter Liv suffered from tuberculosis for several years and finally died from the disease in 1938. This left Siri Derkert paralysed with sorrow for several years. She spent time in Dalarna during the 1942 to 1943 period. From 1943 until 1954 Siri Derkert was a frequent participant on courses at the Kvinnliga medborgarskola (women’s civic school) at Fogelstad. There she met several of the liberal, radical, and independent women, some of whom she may already have met at the Birgittaskola around 1920. Many of the clients at the Birgittaskola included the liberal and radical women of the time. At Fogelstad Siri Derkert drew the speakers and course participants, albeit perhaps not always as flatteringly as they would have liked. The year she spent at the Kvinnliga medborgarskola made an impression on her on both an artistic and political level. The women she met there re-appeared in her artwork for the rest of her life.

In conjunction with her artwork Siri Derkert also became politically active. Throughout most of her life she campaigned for peace, women’s issues, and the environment both through political activism and through her art. She was the chair of Svenska Kvinnors Vänsterförbund (Swedish women’s left-wing association) Stockholm section from 1950 until 1955. She also visited the Soviet Union and Warsaw during the major global peace conference of 1950.

Siri Derkert’s artistic breakthrough is considered to be the exhibition she held at Stenmans dotter in 1944. At that point she was 56 years old. She exhibited in Paris in 1953, displaying her early modernist pieces. She also researched into new materials, methods and motifs for her artistic output. During the 1960s she used a lot of cement and band iron. Kvinnopelaren, at T-centralen (a metro station in Stockholm), was her first public piece. It was unveiled in 1959 and is an early example of her work in concrete. She also worked in collages and textiles, an example of which is the tapestry entitled Vad sjunger fåglarna?*, 1965, which was produced for the assembly hall at Höganäs town hall.

Siri Derkert’s Ristningar i naturbetong, which was an embellishment of Östermalm subway station, was unveiled in 1965. In it she summarised her artistry, her political activism on behalf of women’s issues, and the women who had fought for the things she supported – namely, women’s issues, peace, and the environment – such as Elin Wägner. Another of her pieces is Sverigeväggen, which can be found in Sverigehuset in Stockholm, and was completed in 1967.

In 1960 Siri Derkert became the first Swedish artist to hold a retrospective exhibition at Modern museet. She then went on to have exhibitions at Louisiana in Denmark, in Amsterdam, and in what was then the newly built Nordic pavilion at the Venice Biennale in 1962.

Siri Derkert tirelessly produced and exhibited her works until her death in 1973. Her artwork comprises an almost unique timespan, from 1910 until the early 1970s. Throughout her entire artistic career she was politically and artistically progressive, and she challenged not only her own but also the art world’s limits both in her expression and in her use of material.

Siri Derkert died in Lidingö in 1973. Her grave lies in the Lidingö cemetery. 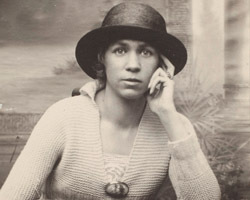